After losing five of their first six matches, Rajasthan Royals are quickly falling out of contention for this year’s IPL playoffs. Patrick Noone looks at the struggling franchise’s key problems.

Rajasthan Royals have endured a difficult campaign in this year’s IPL. Their only victory has been against fellow strugglers Royal Challengers Bangalore and, while they have come close on a couple of occasions to add to that solitary win, the men in pink have a mountain to climb in the second half of the competition if they are to make it into the playoffs. So, where has it all gone wrong for Rajasthan?

According to CricViz’s projected Impact scores at the start of the IPL, Rajasthan were always going to be in for a tough season. The model rated them as the eighth best squad in the competition and that was before considering the likely absentees at the back end of the tournament, because of their overseas players having to join up with their respective national teams ahead of the World Cup.

Even allowing for that projection though, losing five of their first six matches – and the manner in which they’ve lost some of those games – represents a particularly poor return for the Royals.

The former Australian captain has been a fixture in Rajasthan’s middle order after missing last season’s IPL. However, Smith’s prowess as a T20 batsman is far below the level that he has achieved in the Test arena, and his scratchy form is causing the Royals to lose momentum at a critical stage of the innings. Smith’s run rate this season is just 6.60 – pedestrian in the modern T20 era – and, using CricViz’s new Timing metric, we can see that he has the lowest Timing rating of any batsman to have faced 100 balls or more in this year’s IPL. 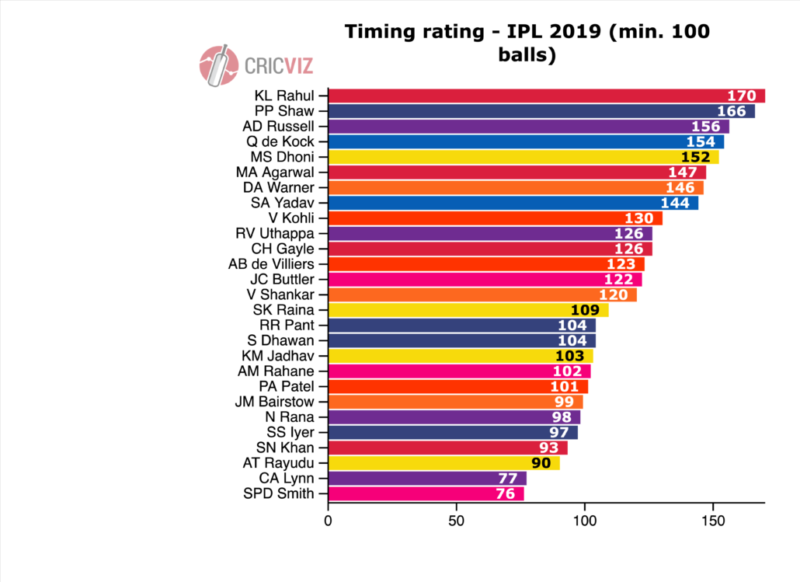 Smith is, of course, one of Rajasthan’s highest-profile players and, as we have seen with other IPL franchises in the past, there can be a reluctance to remove a player of his status from the team, even when they are underperforming. However, on this occasion, Smith’s presence in the Rajasthan XI is proving detrimental as can be seen by his Impact scores in each match. Only against Kolkata Knight Riders – the only match in which he has passed 40 this season – has Smith’s batting Impact been positive. 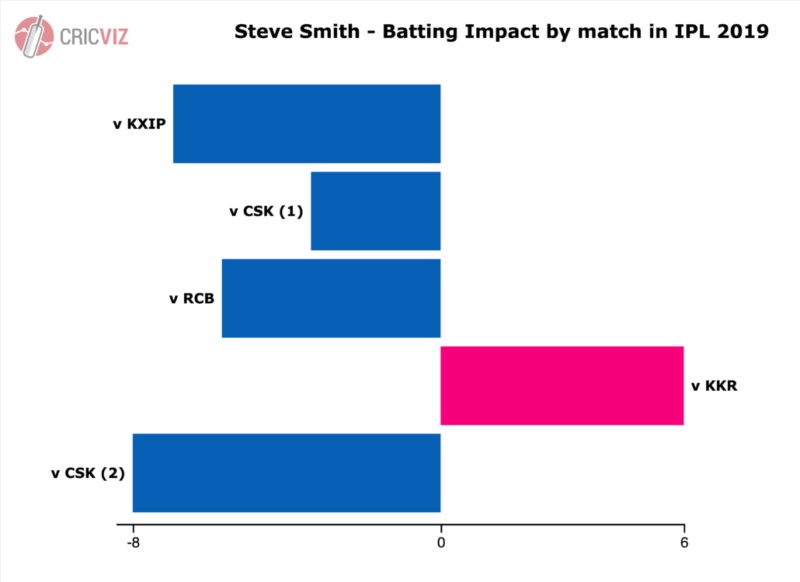 Would they be better served by picking Liam Livingstone? A less heralded player than Smith but one who has already impressed in this year’s PSL and is a proven T20 hitter in the middle order engine room. Rajasthan’s hand may well be forced by World Cup call-ups and Livingstone could feature almost by default later in the tournament, but by then it will surely be too late. Another aggressive option is the Australian batsman Ashton Turner.

With Ajinkya Rahane batting above Smith, Rajasthan’s batting has lacked impetus. Both batsmen have undoubted qualities, but playing two batsmen who are far more comfortable in the longer formats is denying the Royals much needed momentum.

On a slow Jaipur pitch with big boundaries maximising the Powerplay is important because when the field drops back and the ball gets softer run-scoring can prove difficult.

However, Rahane’s position as opener is making it harder for Rajasthan to capitalise on the field restrictions. Rahul Tripathi has an excellent record at the top of the order but is being forced to play out of position in the middle order. Swapping Rahane with Tripathi could be something worth trying.

Thursday night’s defeat to Chennai Super Kings in Jaipur was a chastening one for the Royals. Seemingly in control for the majority of the match, Rajasthan let it slip when Ben Stokes failed to defend 18 runs off the final over. It was a horror show for the England seamer as he overstepped, bowled a wide and was lucky to avoid being called for a waist high no ball in the midst of frenetic passage of play.

That over was perhaps an extreme example of Rajasthan’s problems with the ball at the death, but it was indicative of a wider malaise that has plagued them throughout the campaign. Stokes, in particular, is becoming an issue during that phase of the innings; only Bhuvneshwar Kumar has bowled as many balls at the death and recorded a worse economy than Stokes’ 13.16. Both Dhawal Kulkarni and Jaydev Unadkat had bowled economically against Chennai and both had an over of their allocation remaining, yet Stokes was thrown the ball despite his poor record in the last five overs.

It all amounts to the fact that Rajasthan are the most expensive team during the death overs and, as a result, are struggling to see out matches that they are otherwise in control of. That happened on Thursday, as well as in their previous meeting with Chennai and against Kings XI Punjab in their opening fixture; on both occasions, Rajasthan leaked runs that meant they were chasing a more formidable target that they would ultimately fall short of reaching. 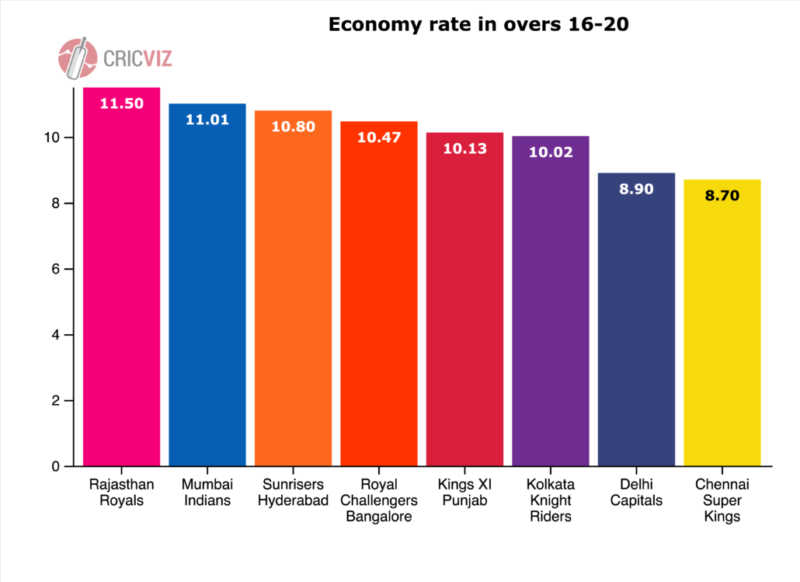 One of the causes of Rajasthan’s woes at the back end of the innings has been their inability to take wickets earlier on, allowing set batsmen to cash in at the death. While Shreyas Gopal, the Royals’ frontline spinner, has picked up six wickets with an economy rate of 7.00 in the middle overs, he has not been backed up by the seam bowling department.

Between overs 7 and 15, Rajasthan have opted to bowl seam 45.5% of the time, the third highest in the competition behind Mumbai Indians and Sunrisers Hyderabad. That is strange given that Jaipur has been one of the slowest tracks in the IPL this season, yet Rajasthan have persisted with their quicks despite none of them being able to take wickets on a regular basis throughout that phase of the innings.

Jofra Archer has recorded an economy rate of 7.00 but is yet to take a wicket in the middle overs, while Stokes, Unadkat and Kulkarni have leaked runs consistently with economy rates of 8.93, 11.42 and 11.33, respectively. Those numbers are nowhere near good enough and it is no surprise that they have had the domino effect of weakening the Royals’ death bowling as well.