Royal Challengers Bangalore have now won two matches in the 2019 Indian Premier League, but they aren’t making it easy for themselves.

On Friday, April 19, captain Virat Kohli slammed his fifth IPL century, Moeen Ali made a breathtaking 66, and RCB piled on 213. Dale Steyn got a wicket off the first over on IPL return – it could easily have been two – and Marcus Stoinis went for just 13 runs in his first three overs. Yet, they barely won – 10 runs the final margin – because Andre Russell in his current form can bat on one leg and still smash bowlers into oblivion.

Russell shared a 118-run stand, off just 48 balls, with Nitish Rana. He had needed 24 in the final over, and with an Englishman bowling the final over in Eden Gardens, he might have backed himself to get those runs. Unfortunately for him, the Englishman was Ali and not Ben Stokes, and Kolkata Knight Riders fell to their fourth straight defeat.

Moeen Ali. Let’s first acknowledge the obvious: Virat Kohli played a brilliant innings. It was a death-overs clinic, and as fine a knock as any he has played in the IPL. But Ali was on a different plane. His innings was a momentum-shifting one, which launched RCB from a potential total of 160-170 to the 213 they eventually got.

.@DaleSteyn62 and Moeen take us through the nervy win, the paceman's 9 year @RCBTweets wait and memories of the iconic Eden Gardens.
P.S What's your views on Moeen's last over, @benstokes38 ?
By @28anand. #KKRvRCB

It was just such clean striking. He launched his second ball over long-on for six. On a night of dropped catches and shoddy fielding, KKR made perhaps their biggest gaffe when they made no appeal against Ali, after he had got a feather against Russell. He was on 9 off six balls then.

Related Story: Andre Russell: What kind of Test career could he have had?

Thereafter, Moeen unfurled a series of boundaries, attacking the shortest boundary. His assault against Kuldeep Yadav in the 16th over demonstrated both how well he was picking lengths and how he had successfully managed to throw the bowlers off their plans and get them to bowl where he wanted them to.

Kuldeep tried going full, taking pace off, enticing the batsman with flight, and going wide of off. But all his efforts were met with a clean swing of the arms, pristine timing and brilliant connection. Moeen reeled off four, six, four, six and six, before holing out at the end of the over. By then, 27 runs had come off it, and RCB had pillaged 89 runs in seven overs of his stay.

Robin Uthappa. When you’re chasing 214, it’s still okay to get out early and lose wickets. But nothing hurts a team as much as staying there and eating up dots à la Robin Uthappa.

To be fair to him, Uthappa walked into a tough situation, with KKR having lost both their openers inside four overs. The ball was seaming, and there was carry, but not of the kind that batsmen like. It resulted in the ball bouncing at awkward heights instead of coming onto the bat and feeding batsmen’s strokes. Even so, Uthappa’s approach was puzzling. 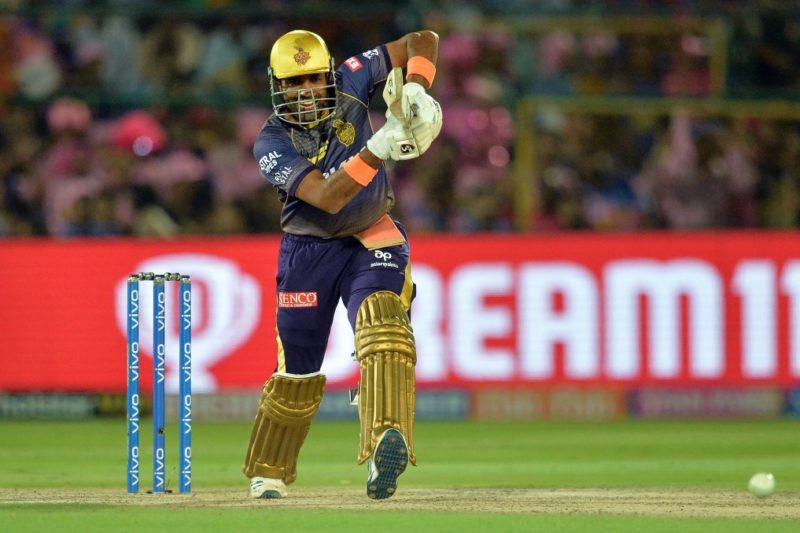 He kept shuffling towards the off stump, which took out the extra room he needed to free his arms. Instead, Uthappa played with a straight bat, and it left him to use his wrists to pierce the field, which he failed miserably at doing.

Uthappa tried playing well within himself and respected the bowlers’ lines, which was all well and good, except that runs – not a demonstration of batting technique – were the need of the hour. When the first sign of intent appeared, he promptly holed out to deep square leg, after mistiming a pull. By then, Uthappa had eaten up 14 dots – 70 percent of his innings – and had left KKR with over 16-and-a-half runs an over to get, which proved too much even for Russell.

"Well done, @NitishRana_27. We need to regroup as a team, and carry the momentum from the partnership two of us had today" ?️@Russell12A, at the post-match press conference.?️#KKRvRCB #KKRHaiTaiyaar pic.twitter.com/SWyLYKqQa7

“I believe that I should bat higher up the order. Honestly, you have to sometimes be flexible as a team.”

– Andre Russell, mincing no words after KKR inexplicably held him back in a big chase

– Moeen Ali coaches Ben Stokes about bowling in the last over

Our last meeting with MI was an absolute nail-biter. What do you expect today?#HallaBol #RRvMI #RR pic.twitter.com/xXoDUCngs0

If you haven’t chewed off half of your finger by the end of it and don’t require medical attention, you can stick around for Delhi Capitals v Kings XI Punjab, which, if the two teams’ seasons are anything to go by, might be more exciting than you think.