In five of their six wins in the 2019 Indian Premier League, Sunrisers Hyderabad have had David Warner and Jonny Bairstow put on 50 or more for the first wicket. Three of those have been century stands, and one of those the highest opening partnership in tournament history.

That match, against Royal Challengers Bangalore, in which they cobbled together 185, also had both batsmen scoring centuries. In three of the other games, one or both batsmen made a half-century. A top-heavy batting line-up that relies heavily on two players. Does that sound awfully similar to a certain other team?

Like their opponents on Saturday, May 4. Hyderabad and Bangalore clashed again, at the M Chinnaswamy Stadium in Bangalore. This time, however, Hyderabad visited without Warner and Bairstow, and things panned out quite differently. They lost by four wickets and now have to await the result of Mumbai Indians’ clash against Kolkata Knight Riders to know their fate. Where did it go wrong for them? Let’s take a look. 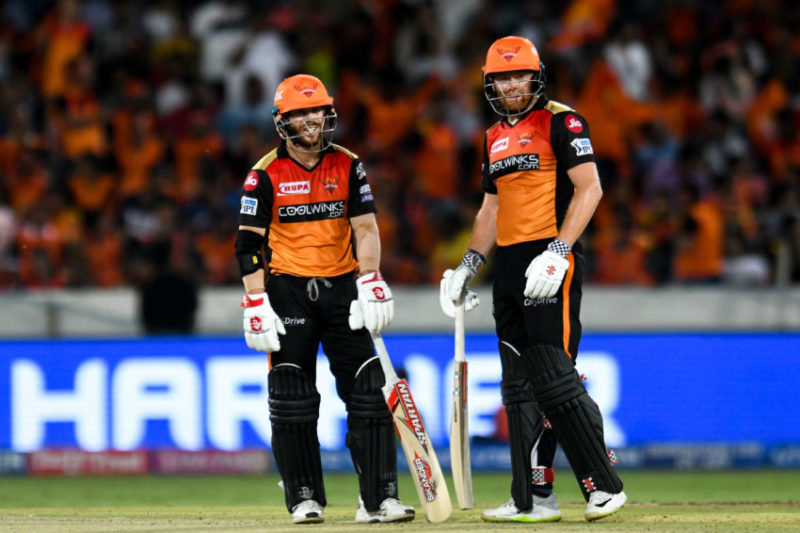 Given their dependence on Warner and Bairstow, so much changed for Hyderabad once the duo departed to join their respective national teams for World Cup preparations. And yet, on Saturday, nothing had changed. Their innings was all about one batsman.

Hyderabad dealt with the early seam movement that has become characteristic of the Chinnaswamy this season well, as Martin Guptill, and an unusually bottom-handed Wriddhiman Saha punched 51 runs in the first five overs. From there, it was all downhill until the innings’ last over.

Once the opening stand was broken, Bangalore’s bowlers suddenly found their lengths and seized control of the game by constantly chipping away. Williamson alone proved an exception, staying put like the immovable object that he is. He went full throttle in the last over, against a prone Umesh Yadav, who was slapped for three fours and two sixes, to haul Hyderabad to a very respectable 175. But around the skipper, the rest of Hyderabad’s middle order managed just 43 runs, and potentially cost the team a 200-plus total. 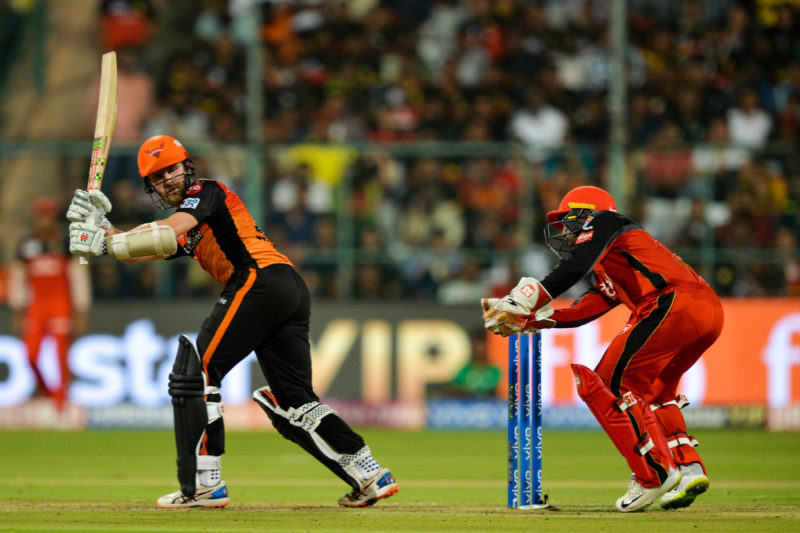 Before Saturday, Manish Pandey had made three fifties in four innings. It was the kind of form Hyderabad needed to minimise the void left by the departures of Warner and Bairstow. Now, he was not only walking onto a good platform, but also into his home ground. But he returned a nine-ball 12 that killed some of the life in the innings.

It resulted in Guptill at the other end slowing down too, as the duo put on 14 runs in 17 balls. Both batsmen fell in the eighth over, to Washington Sundar. Pandey had been sent back cheaply, while Guptill had failed to convert what had seemed like a promising start. 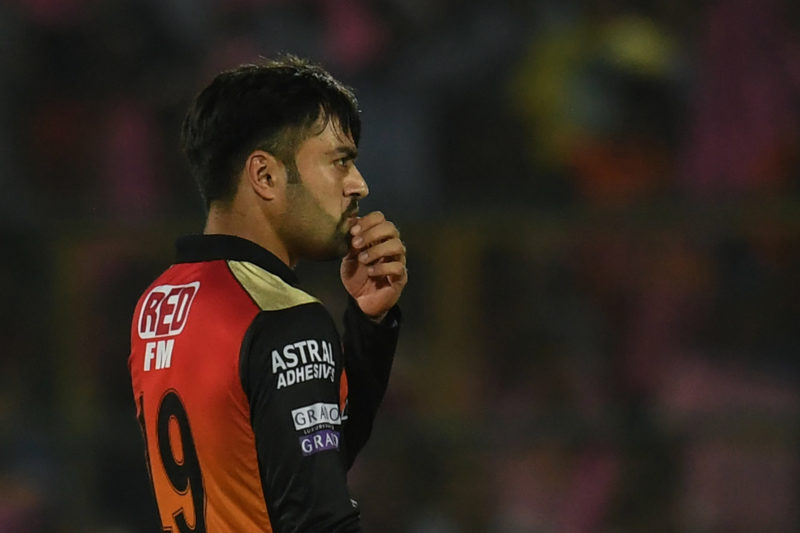 And then, perhaps most tellingly, was the performance of Rashid Khan. The leg-spinner had endured a dry spell on the wickets front, with 14 scalps in 13 matches. But he had a match-winning economy rate of 6.11. On Saturday, not only was he not as incisive as he usually is, he also failed to curtail the runs, leaking 44 runs in four overs.

Rashid’s battle against Shimron Hetmyer, especially, was astonishing. While convention would suggest restraint against the opposition’s No.1 bowler, Hetmyer chose to take the spinner on, and whacked him for four sixes and a four. In all, Rashid conceded five sixes – the most by any bowler from either side – and it made all the difference to a team that prides itself on defending totals.

Yusuf Pathan has had one of his most forgettable seasons ever. Picture this: in eight innings, he has remained not out on five occasions and has still managed only an average of 13.33. And he has bowled one over in all that time.

Despite that, Hyderabad chose to bring him in, for what was pretty much a must-win clash, at the expense of rookie Abhishek Sharma, who admittedly hasn’t made heads turn with the chances he has got, but hasn’t had as many of them. 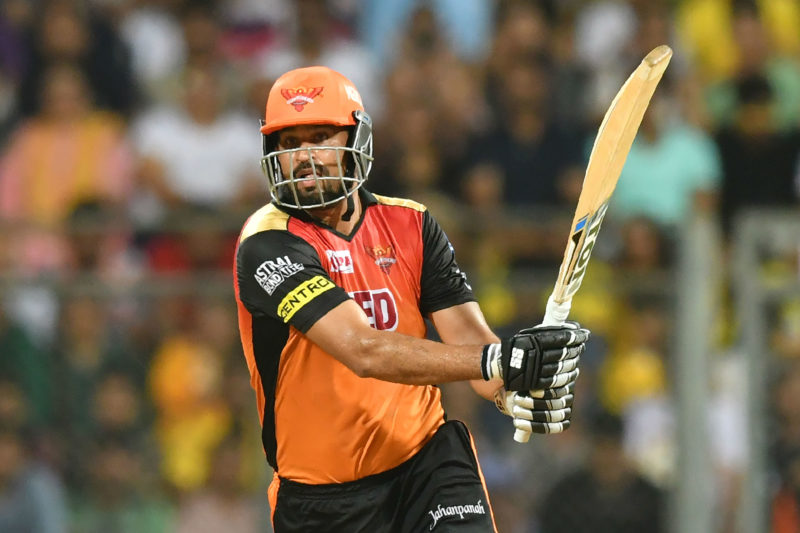 On Saturday, Yusuf contributed to Hyderabad’s middle-overs meltdown by getting out cheaply again. He collected three singles off his first three balls, before trying to manufacture a big hit off leg-spinner Yuzvendra Chahal and holing out to deep extra cover.

Later, he shelled an absolute sitter, when Hetmyer was on 60, at a crucial juncture in the chase, with Hyderabad desperately looking to break a game-changing fourth-wicket stand. It cost Hyderabad 15 runs and, given the situation, potentially the match.

Kane Williamson is an astute tactician at most times, but his choice of bowler for the last over of the chase was a tad dubious. It’s one those things that’s so easy to criticise in hindsight, but which cannot be ignored.

RCB had required six off the last over. On strike was tailender-who-likes-to-swing-a-lot Umesh Yadav. Umesh is usually not comfortable against fast bowling. He can get harried by pace and bounce, and bowlers often use it to force errors out of him. RCB had also lost three wickets in five balls, so the chase had suddenly got just a little trickier.

Two men announced themselves to #VIVOIPL, one man redeemed himself with the winning shot for @RCBTweets 🙌#RCBvSRH pic.twitter.com/4YjoLbdhY7

Given all that, Vijay Shankar seemed to be the obvious candidate to bowl the over. Shankar isn’t express, but he can use his height to generate some bounce – enough at least to throw a tail-ender off his comfort zone. Williamson, however, turned to Mohammad Nabi.

Nabi has been excellent for Hyderabad through the season, no doubt. He has maintained an impeccable economy rate of 6.55 and has also proven to be a wicket-taker. Even so, this seemed like a major risk at this stage. With his first ball, Nabi fired it full, flat and wide of off, allowing Umesh to reach out and slap him through point. With his next ball, he over-pitched again, and Umesh crashed it past cover to seal the game.

No pace, no bounce, no turn. Just two simple, invitingly full off-breaks that were easily put away. The finish was also sweet retribution for Umesh, who has taken his share of final-over pounding this season, even if he may have narrowly managed to defend totals on a couple of those occasions.

"I felt like there is no chance I am getting runs"

“I’ve played county cricket for a long time and Test-match cricket in Dubai and Abu Dhabi, and that’s the exact same I would say}