New Zealand first-class cricketer Leo Carter joined an illustrious list of batsmen to hit six sixes in an over in competitive cricket, after clubbing spinner Anton Devcich for 36 runs during a Super Smash game against Northern Knights in Christchurch.

Carter headlined Canterbury Kings’ mammoth chase of 222 in just 18.5 overs, smashing a 29-ball 70 with three fours and seven sixes, six of which came in the 16th over, catapulting the left-handed batsman from a 12-ball 11 to 47 off 18.

Leo Carter hit 6 sixes in a row and the @CanterburyCrick Kings have pulled off the huge chase of 220 with 7 balls to spare at Hagley Oval! 👏

Coming in at No,4, with Canterbury Kings at 101-2, Carter forged a 118-run stand with skipper Cole McConchie, the other unbeaten batsman in the seven-wicket win. McConche played second-fiddle with a 25-ball 49, having powered a quick 21 off nine balls, before taking a backseat as Carter surged ahead.

Canterbury Kings needed 64 runs from the last five overs when Devcich started his over. The duo wrapped up the chase with seven balls remaining. 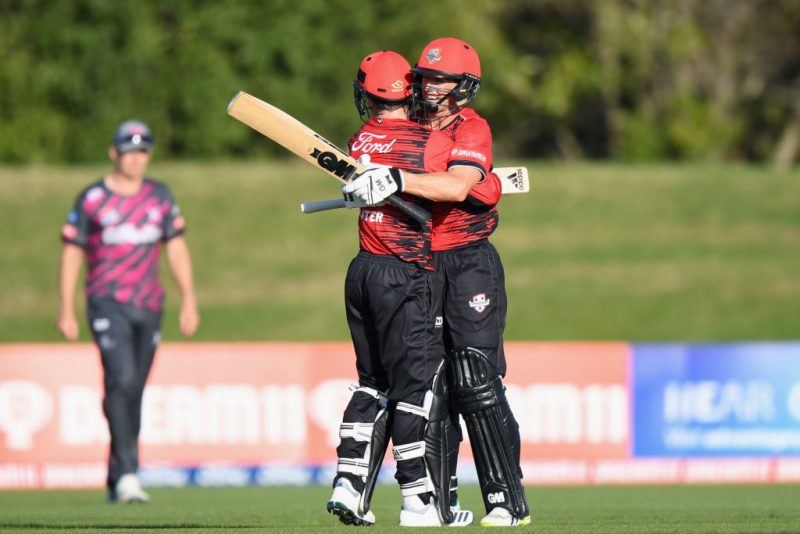 At the international level, only two batsmen – Yuvraj Singh [T20I] and Herschelle Gibbs [ODIs] – have struck six sixes in an over. In domestic T20s, Worcestershire’s Ross Whiteley [in the T20 Blast, 2017] and Afghanistan’s Hazratullah Zazai [in the Afghanistan Premier League, 2018] have also hit six sixes in a single over. Alex Hales also hit six sixes off as many balls during a 2015 T20 Blast for Nottinghamshire, but his feat was split across two different overs.

The 222-run chase set the new record for the highest successful chase in Super Smash history. Devcich ended with figures of 0-61 from his four overs.