A controversial run-out decision during the first India-West Indies ODI saw the on-field umpire ask for a review seemingly only after the West Indies’ players were told of a TV replay, drawing the ire of India captain Virat Kohli.

The incident occurred during India’s innings, in the 48th over, when Ravindra Jadeja, on 21, attempted a risky single, inviting a throw from Roston Chase at cover. The fielder’s direct hit dismantled the stumps, but after only a muffled appeal by Chase, the umpire did not refer the decision with the TV umpire.

Jadeja run-out.
Umpire gave it not-out. Pollard was told by someone from the dressing room that it was OUT. He insisted that the on-field umpire heads upstairs for help. OUT was given OUT. But does the end justify the means?? How’s it different from the Smith #brainfade moment?

Just as players began to retake their positions, the broadcasters beamed out a replay on the live coverage, which showed that Jadeja had actually fallen short of the crease. Seemingly having been told of the replay by someone in the dressing room, West Indies captain Kieron Pollard approached the on-field umpire, Shaun George, who decided, belatedly, to refer it to the third umpire.

It took little time for the umpire to signal the red light, but the matter did not die down right there. Kohli expressed his extreme displeasure at the turn of events, after the match. 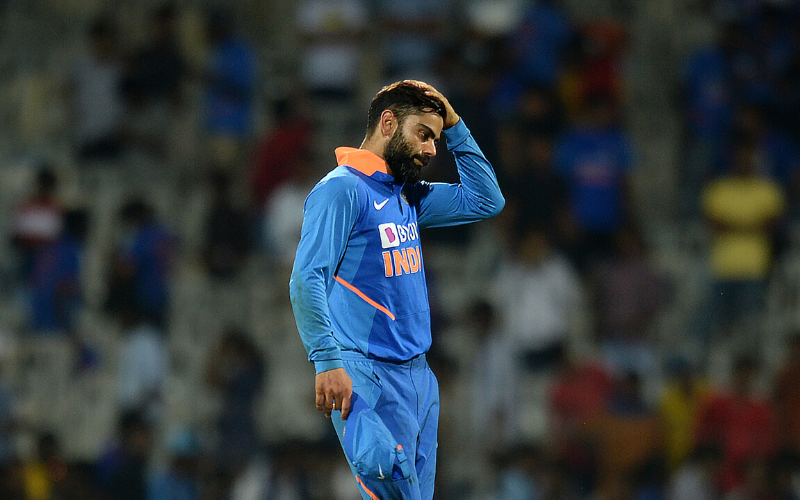 “People sitting outside can’t dictate what happens on the field. I think that’s exactly what happened there”

“The thought is simple, the fielder asked ‘how is that’ and the umpire said ‘not out’. The dismissal ends there,” Kohli said. “The people sitting on the TV outside cannot tell the fielders to then tell the umpire to review it again. I’ve never seen that happen in cricket.

“I don’t know where the rules are, where the line is drawn. I think the referee and the umpires have to take that up, see that incident again. And figure out what needs to be done in cricket. People sitting outside can’t dictate what happens on the field. I think that’s exactly what happened there.”

Pollard seemed unaffected by the entire sequence, stressing that the most important thing was that Jadeja was correctly adjudged out.

The run-out was the seventh wicket to fall in India’s total of 287-8, which was hunted down by West Indies with 13 balls to spare.