Kagiso Rabada’s performance on the first day of the second Test against India should serve as a subtle reminder that when it comes to the discussion of the best fast bowlers in the world, he’s right up there, writes Rishad D’Souza.

Having lost the toss, South Africa conceded 273-3 on Day 1 in Pune against a dominant India. The three wickets all fell to an indefatigable Kagiso Rabada.

The year 2019 has been a somewhat sub-par one for Rabada. Across formats, he has averaged just under 29. For context, he averaged no more than 24.69 in any of his first four full years in international cricket, from 2015 to 2018.

His dip in form has coincided with one of South Africa’s more unenviable years in international cricket. They lost a Test series 2-0 at home to Sri Lanka at the start of the year, and then suffered a first-round exit in the World Cup, winning just three of their eight completed fixtures in England. 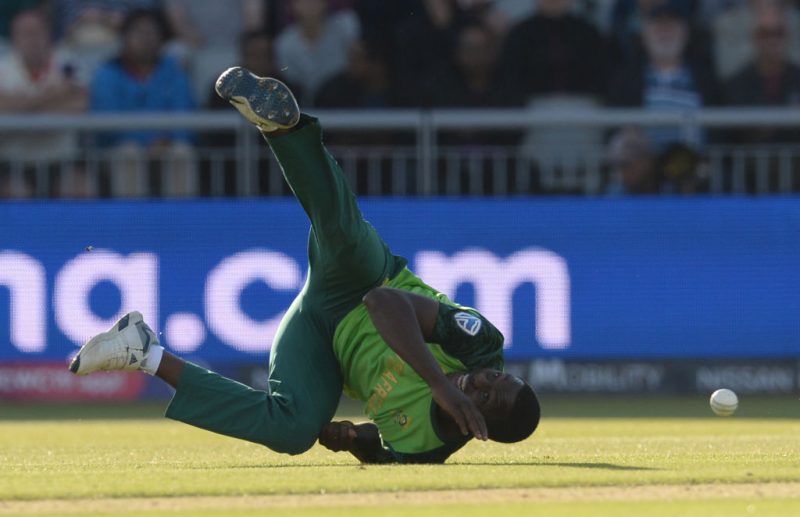 South Africa did not enjoy a great World Cup campaign, nor did Rabada

Having lost the toss on a good batting wicket against an even better batting line-up in Pune, South Africa’s woes showed no signs of letting up. But Rabada stood tall and produced a performance that kept them theoretically in the contest, steaming in for 18.1 overs in the heat to take 3-48.

His first victim was last match’s twin-centurion Rohit Sharma. Having exploited the little bit of movement and bounce on offer to build the pressure, he got one to straighten off a good length to take the edge of the right-hander’s bat. India were 25-1 and South Africa had an opening to work with.

The rest of South Africa’s other bowlers couldn’t maintain the pressure or match his presentation. Vernon Philander was his usual parsimonious self, but his lack of speed ensured Mayank Agarwal and Cheteshwar Pujara could negate him easily. Anrich Nortje, on debut, created moments of uncertainty with his raw pace, but leaked runs at over 4.5. Premier spinner Keshav Maharaj was more consistent with his areas than he was in Visakhapatnam, but the fresh pitch had no bite in it for him.

Desperate for another wicket, Faf du Plessis brought Rabada on for a second four-over spell in the first session itself. By the time he came on for his third spell, Agarwal and Pujara had powered India past 150. So smooth was the going that even the typically restrained Pujara had hit a six.

Pujara doesn’t usually make mistakes after he’s passed fifty – bowlers have to pry him out. But Rabada was able to force the error, having him fishing outside off to get caught at slip for 58. And while the calm and composed Agarwal looked set for another huge score, having compiled a hundred after his double in the previous game, the reintroduction of Rabada almost made it appear as if Agarwal was starting his innings afresh. He defended cautiously, drove tentatively and finally poked one to du Plessis at first slip, falling for 108 to give Rabada his third.

Another 1⃣0⃣0⃣ for Mayank Agarwal?

Fast bowling has been a much talked-about discipline this calendar year, but Rabada has often found himself sidelined in the conversation. There’s been Jofra Archer’s spell-binding debut for England, Jasprit Bumrah’s continued all-formats awkward excellence, Pat Cummins’ insatiable hunger for Test wickets and Mitchell Starc’s tendency to upstage his rivals at World Cups. Oh, and there’s Rabada too.

When asked how he was affected by the hype around the likes of Archer and Bumrah, Rabada replied that seeing others excel simply reignited the fire in his own belly. “I admire those bowlers, they are good bowlers,”  he told iol.co.za “The media hypes certain players, and that’s okay, I know I have been playing very well. Archer is such a natural talent, Bumrah is doing wonders and that can force you to lift your game. You are not always at the top, that’s one thing I can tell you.”

His performance at Pune on Thursday, 10 October should serve as a gentle reminder of why Rabada remains one of the very best in the world. If anyone can drag South Africa out of the rut they find themselves in, it’s him.