It was inevitable wasn’t it. While the crowds of Adelaide were treated to the grit of Cheteshwar Pujara, what remained to be seen in this Test series was the majestical timing of Virat Kohli’s bat.

On day two of the second Test, wishes were to be granted, as India’s talisman came up trumps in a riveting battle with Australia’s exceptional bowling quartet.

Kohli’s arrival to the crease came on the back of a reeling opening burst from the Australian pair of Mitchell Starc and Josh Hazlewood. Murali Vijay was to be cleaned up by a trademark Starc inswinger, the paceman roaring in delight, a burst of emotion that hinted at a silencing of his critics. A Hazlewood yorker had KL Rahul breakdancing at his crease, his stumps toppled. Kohli would have to find Indian redemption alongside the steadfast Pujara, with India 8-2, trailing by 318 runs. Was it all to be a repeat of the opening day of the first Test?

What a delivery, play that!

Hazlewood and Starc may have been licking their lips on a Perth wicket offering stinging bounce, but a checked on-drive from Kohli on his second-delivery was some riposte. All the opening signs pointed towards an action-filled, stroke-laden innings, an accelerated counter-attack ready to topple any Aussie threat.

When Kohli has gone big in 2018, he has gone quickly as well – his 153 at the Centurion came at a strike rate of 70.50, that barnstorming 149 against England at 66.22. Hazlewood struggled to find his length as Kohli treated him to three boundaries in the tenth over, an on-drive sandwiched between some sublime whips through mid-wicket.

The ultimate challenge was to arrive from the sterner test of Pat Cummins and Nathan Lyon. Both had claimed Kohli’s scalps in the first Test, and it seemed that the pattern was set to follow as they began to strangle the scoring rate. 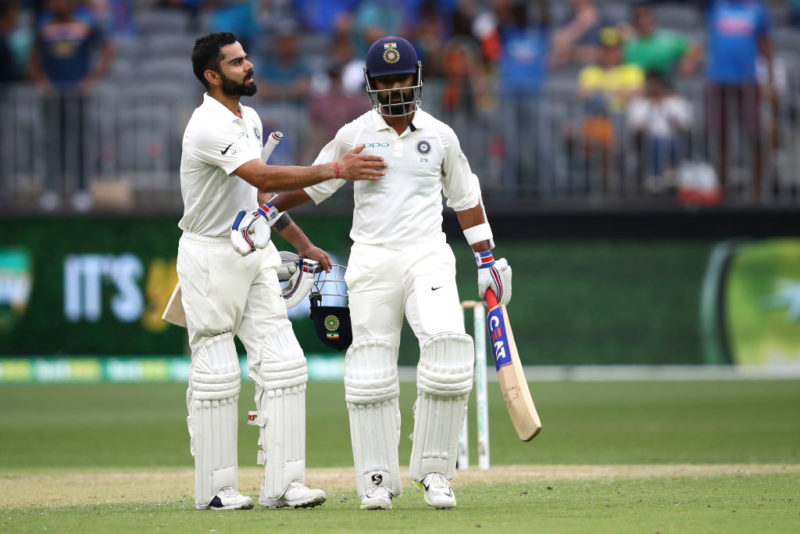 For all the qualities of Starc and Hazlewood, the chameleon qualities of Cummins are of another dimension. On some days, he will gallop through the crease with a devilish ferocity, his intentions simply to rattle the poor batsmen with pace. On others, he will channel the discipline of an intellectual, playing a waiting game with an impeccable line and length. It appeared that today was to see the latter emerge, as he encouraged Kohli to fetch at the ball. Plays and misses were to follow as Cummins prayed for the faintest of edges. The paceman’s six overs before tea saw him concede just six runs, while Lyon tightened up the screws at the other end.

Much of the same was to continue after the tea break, and with Pujara strangled down the leg-side by Starc, it seemed that Australia were set to wrestle back the initiative. Ajinkya Rahane arrived with some intent however, slashing hard at anything loose as the scoreboard began to find some acceleration.

It appeared that Kohli was impressed by his partner’s methods, and proceeded to his own impersonation, slashing with hard hands to Cummins to send an outside edge over the slip cordon and collect his 20th Test fifty. Rahane’s effervescent ways seemed to bring out the best in Kohli. An on-drive from Hazlewood was symbolic of the day – for all of Australia’s persistence, Kohli seemed ready to conjure a shot that took back control in a manner that British politicians could only dream of.

Related Story: The big six: India dominate again with Mayank Agarwal double century
For all the vigour and probing excellence of Cummins, one could only feel for him when he was treated to the shot of the day. A ball just fractionally full was dispatched with the most sumptuous of drives through cover. For all his patience, Kohli picked up length with great watchfulness across the day. As stated by CricViz, while he collected only eight runs from 54 good-length deliveries on day two, his run-rate against full-length deliveries was 7.37.

Kohli’s steely eyes and handshake with Rahane at the end of the day said it all – he may currently be on 82 from 181 balls, but how he will relish reaching three figures tomorrow. This is a new India emerging, one that is learning from its errors. This wasn’t a lone battle of Kohli as the contributions of Pujara and Rahane were vital. A difference has come from the travails of a summer in England, with the arrival of a collective batting unit ready to live up to their captain’s lofty standards. The dream of a series win in Australia is well and truly alive.