Nathan Lyon’s four-wicket haul on the first day of the second Test against Pakistan helped Australia bundle the hosts for 282.

Lyon, who went past Mitchell Johnson and Brett Lee along the way to become Australia’s fourth-highest Test wicket-taker, called it a ‘great achievement.

Lyon bowled three consecutive maidens before picking up three wickets in four balls, which soon changed to four wickets in two overs, to leave Pakistan tottering at 57-5. The home side were 0-4 in that spell, with Nos.4, 5 and 6 all scoring ducks. 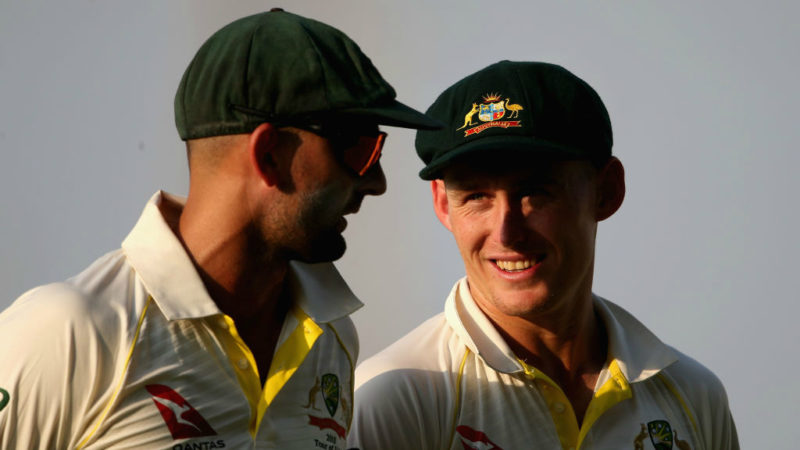 Lyon and Marnus Labuschagne shared seven wickets between them

“When the wicket’s like that I have to stick to my strengths and my strength is spinning up the back of the ball and bowling like I would at home,” Lyon said after the day’s play.

“Personally, that’s just about adapting and using the facilities and what you’re dealt with to your advantage. I was pretty happy with the way the ball came out.”

3️⃣1️⃣4️⃣ Test wickets for @NathLyon421 as he goes past Brett Lee and Mitchell Johnson on the 🇦🇺 all-time wicket-takers list 💪 pic.twitter.com/pXb1RfgJQH

The veteran off-spinner got great support from one of his two spin-bowling partners, leg-spinner Marnus Labuschagne, who dismissed debutant Zaman to break the 147-run stand between him and the Pakistan captain. Labuschagne, in the team more as a batsman than a bowler, ended with 3-45.

Even though Australia had Pakistan 77-5 at lunch, the comeback from Ahmed and Zaman put the pressure back on the visitors in the second session the two batted right through till Zaman was dismissed off the last ball before tea,

"You have to bowl tight, bowl in partnerships and build pressure, the old-fashioned way"

That wicket opened the gates once again for Australia as Labuschagne then dismissed Bilal Asif and also got Ahmed, who was tiring and was batting with an injury to his left forearm after being hit by a Mitchell Starc bouncer.

Mohammad Abbas has raced to 50 Test wickets – only Yasir Shah has done it in fewer matches for Pakistan! ⚡️ #PAKvAUS #howzstat pic.twitter.com/4Qo7Cgcjmc

“I’m a massive one, especially here in the subcontinent, to bowl in partnerships, build pressure and try and go under two runs an over,” Lyon said.

“I’ve said it over and over in time and that’s one of our things as a bowling group we try and focus on, especially after losing the toss and bowling first on a day one wicket. You have to bowl tight, bowl in partnerships and build pressure, the old-fashioned way. There’s no secrets to it.”

Lyon is now only behind Shane Warne (708), Glenn McGarth (563) and Dennis Lillee (355) on the Australian list of highest Test wicket-takers and called going past Lee and Johnson as a ‘massive honour’. Lyon now has 314 Test wickets – Lee took 310 and Johnson 313.

.@NathLyon421's four-wicket spell this morning in Abu Dhabi has left him on 314 wickets from 80 Tests, putting him fourth on the list of all-time wicket-takers for Australia! #PAKvAUS #howzstat pic.twitter.com/lenwZvedWr

“I’ve never been one for personal success and personal goals. Or at least talking about them,” Lyon said. “But it’s a massive honour to pass the likes of Brett Lee and Mitchell Johnson today.

“I’ve been very fortunate to play 80 Test matches for Australia and to be in this position to take 314 wickets, personally it’s a great achievement and it’s something I will look back when I retire from the game and sit back with family and friends and have a beer and talk about it.”