While India need six wickets on the final day to take first blood in the four-match Test series with Australia, Nathan Lyon believes the home side can still come up trumps.

Ajinkya Rahane and Cheteshwar Pujara starred for India on day four, both scoring half-centuries to help their side to 307 all out, with Australia set 323 to win. Lyon was the bright spark for the bowling side, taking 6-122 as he found both turn and bounce from the Adelaide wicket.

Mohammed Shami and Ravichandran Ashwin then combined with a pair of wickets each to have Australia 104-4 at the close of play. 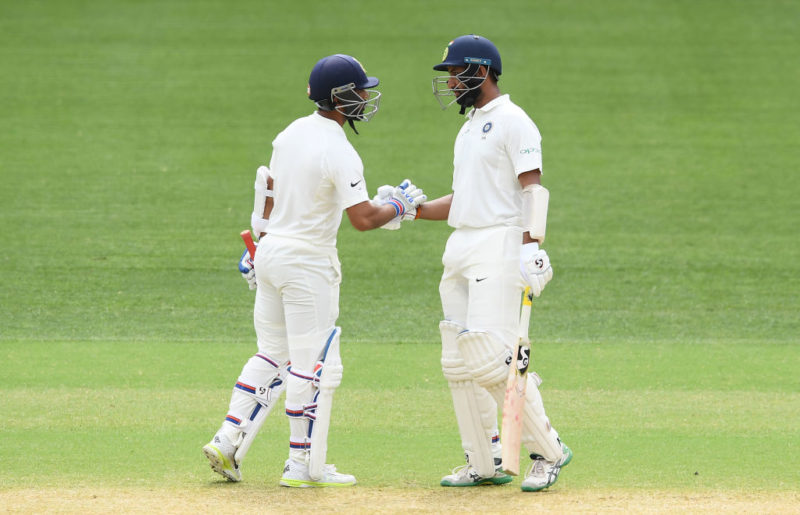 While chances of a win seem minimal, Lyon believes that his side can take inspiration from their rearguard in the Dubai Test against Pakistan in October, when they batted out the entire final day to secure a famous draw.

“We just spoke about Dubai just then,” said Lyon after the day’s play. “We still believe we can win this, and that’s the best thing. The best thing about Test cricket is you want to challenge yourself against the best players in the world and India is the No 1 Test team in the world.

“We still believe we’re in this game, it’s just about coming out tomorrow, winning the first ball, first over, first hour, just breaking it down, very simple. Cricket is a very simple game, we just need to not complicate things, enjoy ourselves, compete hard and fight our backsides off.”

Related Story: The Test: Things we didn’t know we needed to know about Justin Langer’s Australia

Key to Australia’s hopes of staving off defeat will be the under-pressure Shaun Marsh, who battled hard to stay unbeaten on 31 from 92 deliveries, his highest score since the first Test against South Africa in March.

Lyon threw his support behind the Western Australia batsman, and explained that he had a word with the left-hander on tackling the threat of spin.

“In my eyes I think Shaun Marsh is a superstar. I’ve bowled to him a lot in Shield cricket and he’s whacked me all over the ground. I think he’s one of the best batters going around, he’s definitely one of our best batters in Australia.

“He spoke to me about playing off-spin and I said ‘Shaun, you’ve just got to back yourself, you’re one of the best batters in the world and you’ve played me enough in the nets, you know how to play off-spin’, so I think Shaun’s quite confident, he may not look it, but I guarantee he’s very confident and he has the belief he’s going to be that hero who stands up tomorrow and wins this game of cricket for Australia.”

With Lyon enjoying success on the pitch he describes as one of his “favourite grounds around the world,” Australia’s main challenge will come from his counterpart Ashwin who already has five wickets in the match.

Related Story: ‘What a bloody legend!’ – Perry and Gilchrist in heart-warming exchange after World Cup injury

“It’s definitely spinning and they’ve got a world-class spinner, so it’s going to be a great challenge for our batters out there, with two left-handers, with Ravi spinning away, it’s definitely going to be a massive challenge,” said Lyon. “But the wicket’s good enough for us to really knuckle down tomorrow and have the belief we can score these runs.”