Tim Murtagh realised a childhood dream by claiming the latest entry on the Lord’s honours board with a sensational five-wicket haul on the opening day of Ireland’s four-day Test against England.

Murtagh, who turns 38 next week, was born in London but began playing for Ireland in 2012. “It’s special as it gets for any cricketer,” said the medium-pacer. “Walking off having taken five wickets is as good a feeling as I’ve had in my career.

“Growing up as a kid I dreamed of being on that honours board, probably not in that [away] dressing room, but as it’s worked out being in the away dressing room makes it that bit more special now.”

Tim Murtagh has now taken 102 more first-class wickets @HomeOfCricket than anyone else this century. https://t.co/8HudBxgZ0l

Murtagh, part of Middlesex for 12 years, moved to Ireland in search of greener pastures on the advice of team-mate Ed Joyce. Ireland achieving Test status handed him a long-awaited debut in whites, and he became a part of their first-ever red-ball international in 2018, against Pakistan, six years after his first ODI.

On Wednesday, July 24, Murtagh ran through the hosts’ batting line-up, finishing with 5-13 in nine overs, well-supported by his new-ball partner Mark Adair, who took 3-32.

"It's as special as it gets for any cricketer. Walking off having taken five wickets is as good a feeling as I've had in my career"

Even under clear skies, his deliveries consistently wobbled into the right-handers, accounting for both openers Jason Roy and Rory Burns, before returning to dismiss Jonny Bairstow, Moeen Ali and Chris Woakes, all for a duck.

He managed to relentlessly hit the right lengths on a deck he knows well – he’s played 87 first-class games at Lord’s – headlining a day when a combined 20 wickets fell.

“I should know how to bowl here by now. I’ve played for a number of years here and knew if I found my length hopefully I could cause a few problems. 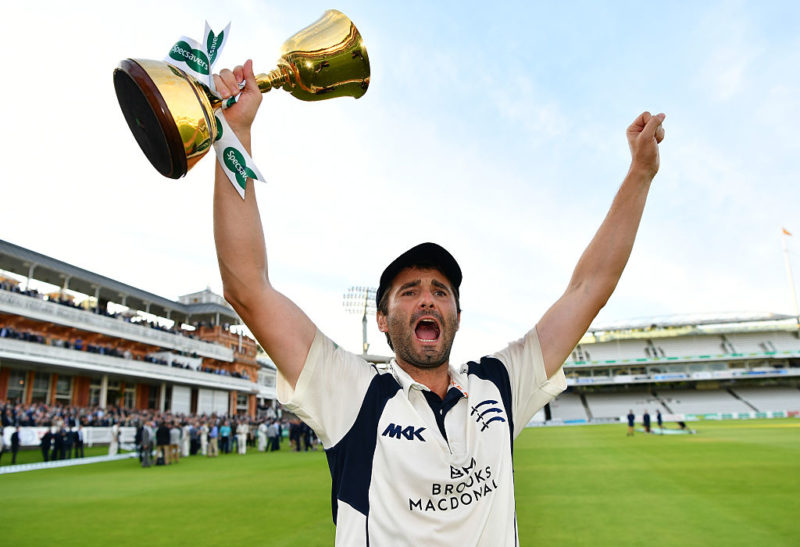 A part of Middlesex for years, Murtagh knows Lord’s well

“I said to the guys if we are disciplined and pitch the ball up, there’ll be enough in the wicket to cause a bit of damage.”

England, who came into the one-off Test revelling in World Cup glory, were, at one point, reeling at 43-7, before Sam Curran and Olly Stone’s lower-order contributions took them to their eventual score of 85 all out.

“We were looking to bowl first, and I had a feeling they [England] would want to bat first, so I had my head around I’d be bowling the first ball this morning anyway,” said Murtagh.

“Our goal was to try and knock over three or four by lunch but everything went our way, reviews went our way, we took all our catches and the other bowlers did a really good job as well.”