“I feel like I’m a different bowler definitely when it swings,” said Trent Boult, master of swing and understatement, after taking 5-21 in an unbroken 10-over spell in New Zealand’s fourth ODI against India.

In humid conditions at Seddon Park, Hamilton, on Thursday, January 31, Boult got the ball to move both ways. Combining with Colin de Grandhomme, who picked up three wickets in another unbroken spell, he helped bowl out India for 92 – their second-lowest total against New Zealand and their seventh-lowest overall – and matched Richard Hadlee’s national ODI record for most five-fors (five).

The visitors, who had dominated in the three matches so far, were bundled out in 30.5 overs. At 40/7 at one stage, they were in danger of falling short of their lowest ever ODI total of 54.

Boult, who had begun his spell smiling after Kane Williamson chose to field first, was a satisfied camper with a wide grin by the end of the quick eight-wicket win. The left-arm pacer, however, said he hadn’t expected the surface to play as it did, imagining it to be “pretty dry and actually quite slow”.

"It's purely a conditions thing ... It was nice to see the ball move in the air like that"

Boult’s returns so far in the series were 0-19, 2-61 and 2-40. Nothing special, getting little movement on batting-friendly pitches and with no scoreboard pressure he could benefit from. Even on Thursday, he got his first wicket only in the sixth over of the game. By then, however, he had lined the batsmen up well.

Shikhar Dhawan’s wicket, which he picked as his favourite of the lot, was as much a reflection of the batsman’s frailties against the moving ball, as it was about the bowler setting him up. Boult angled in a searing in-swinger, pitched full in line with the stumps and caught the batsman plumb playing across the line. 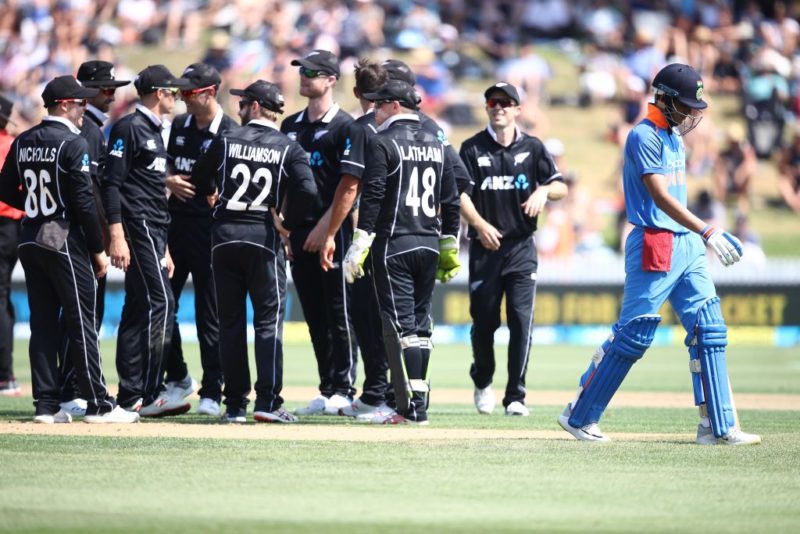 Shubman Gill, making his ODI debut, was one of Boult’s wickets

Rohit Sharma and Shuman Gill lobbed similar return catches to balls shaping in, while Kedar Jadhav was done in by late swing and Hardik Pandya got a short ball in Boult’s final over.

“I suppose the modes of dismissals – a couple of caught-and-bowleds that lobbed back to you, probably not how you traditionally see your wickets as an opening bowler,” the bowler told reporters, adding later to the broadcaster, “Once the bowl is swinging like that you try to bring as many aspects, in terms of the bowled and the lbw into play.

“The catching men, they’re important to keep the batsmen on strike. I bowled a couple of maidens as well, it’s about not letting them off and giving them the option to rotate strike.”

Both Boult and de Grandhomme kept running in despite the heat, with only the ice pack around their neck inbetween overs offering some relief. The decision, according to the star of the day was part his, part the captain’s.

“It’s a pretty unique thing to bowl 10 overs on the bounce,” he admitted. “But [it’s] just one of those things. The rhythm felt good. The ball was still swinging later in the spell, so it was about making the most of it.

“It’s purely a conditions thing … It was nice to see the ball move in the air like that. I feel like I am a different bowler definitely when it swings. I made the most of it today.”