AB de Villiers gives a rare and revealing interview to Neil Manthorp in which he explains his controversial decision to take a break from Test cricket.

When AB de Villiers announced he would be taking an indefinite break from Test cricket in January 2017 it provoked a mixture of outrage and derision. For many, his decision was indicative of a growing trend in the global game, with players prioritising lucrative T20 contracts over the game’s supposedly premier format.

“I needed a bit more time away from the game, and I need some more,” said de Villiers by way of explanation as he confirmed he would be sitting out South Africa’s Test series in England last summer. “I’m just not ready yet.”

In the months that followed, de Villiers largely kept his counsel. But now, having returned to Test cricket for South Africa’s Boxing Day Test against Zimbabwe following a near two-year break from the format, he has opened up on the reasons behind his break and the pain he felt at the criticism directed at him.

“I knew something needed to change and I needed to do something about the way I was feeling,” he tells South African writer Neil Manthorp in the latest issue of Wisden Cricket Monthly – available to buy now. I couldn’t keep going like I was going, and I wanted to feel what it was like to be a normal, family guy, which is certainly not the case when you play for 13 consecutive years for the Proteas and also IPL and other tours.

To have people saying you are turning your back on your country and your team, that was difficult for me to take, especially after giving everything for 12 years

“When I tried to get away a bit, people started labelling me. It was difficult. I hate getting bad press – no one enjoys it. I’ve always enjoyed getting constructive criticism but to have people saying you are turning your back on your country and your team, that was difficult for me to take, especially after giving everything for 12 years. It was tough. I don’t think I ever did anything to be held responsible for the state of Test cricket.” 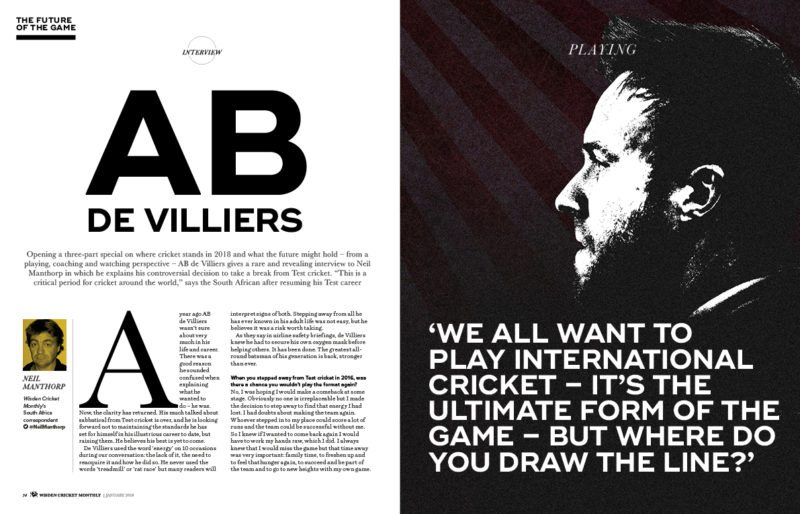 In a wide-ranging interview, de Villiers also offers his support for the forthcoming World Test Championship and advocates a three-match final, playing one fixture in each finalist’s home country and then at a neutral venue if required.

He also shares his thoughts on day/night Test cricket, the shortening of Test matches to four days, and the thorny issue of free player movement. “This is a critical period for cricket around the world,” he says.

To read the AB de Villiers article in full, as well as an exclusive interview with Eoin Morgan, you can buy your copy of Wisden Cricket Monthly here 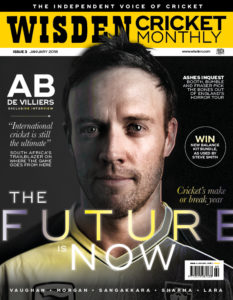