David Gower, one of England’s all-time greats, picks out his favourite moments from his career in an exclusive chat with Phil Walker. Introduction by Roshan Gede.

A left-hander full of class and grace, David Gower was the mainstay of England’s batting for a major part of his 14-year-long international career. That journey had started with a hundred in only his second ODI against Pakistan and by the time it ended, he had become England’s leading run-scorer in the longest format, surpassing the great Sir Geoffery Boycott’s tally of 8,114 in his farewell series against Pakistan at home. It would later be bettered by three captains: Graham Gooch, Alec Stewart and Alastair Cook, but that, by no means can deter the legacy of the elegant middle-order batsman.

He made a steady progress in his first year as a Test batsman, a run that began with back-to-back fifties against Pakistan and carried on till a match-winning double hundred against India at Edgbaston. England won each of the four series in the period, but went through a few tough phases thereafter in the eighties. Gower, however, remained to be the glue that held the batting together, starring in some of his side’s famous wins. Overall, he scored 11,401 international runs, including 25 hundreds in 231 appearances for England.

Here are the top ten moments of his career, picked my the man himself.

In what turned out to be my final season at King’s we played a lovely touring side called Stragglers of Asia and I got a hundred. Someone saw my innings and reported back to Leicestershire and on the back of that I got an intro. The following season, I left school in March and decided to take up the option of playing full-time. My heart was not really with the Law; my heart was with Leicester.

This was around the time I’d first started to make hundreds instead of 40s and 50s. There was pressure on me to improve. Illy [Ray Illingworth, Leicestershire captain] had been talking me up, saying to people I would play for England, and it was sort of incumbent upon him to make sure I did. Ray was God knows how many years my senior, and he took what can be best described as a stern fatherly attitude to what I was doing. You needed his backing and from early on he seemed to be optimistic that I would succeed.

Whatever you say about New Zealand in 1978, it was still a Test hundred, and you still have to get to that landmark. I remember going from 95 to 99 straight down the ground off Steven Boock and then I thought, ‘Ok, one more run’ and very gently swept a straight ball around the corner for a single. Halfway through the shot I thought, ‘Hang on a second!’ – because I’d played a similar shot at Lord’s against Iqbal Qasim and got it horribly wrong and was bowled for 50-odd. I got a lecture from Mike Brearley about big scores and Test matches being five days but on this occasion I managed to get enough bat on it. Then Botham ran me out.

It was a second-string Australia but in amongst that team was Rodney Hogg. He got a whole stack of wickets and his short bursts were bloody sharp – probably the quickest I’d seen at that stage. He hit me on the neck at Perth, before I got to my hundred, and gave me some abuse as we walked off at tea. I’d played grade cricket in Perth the previous winter so to get a hundred there was quite special. 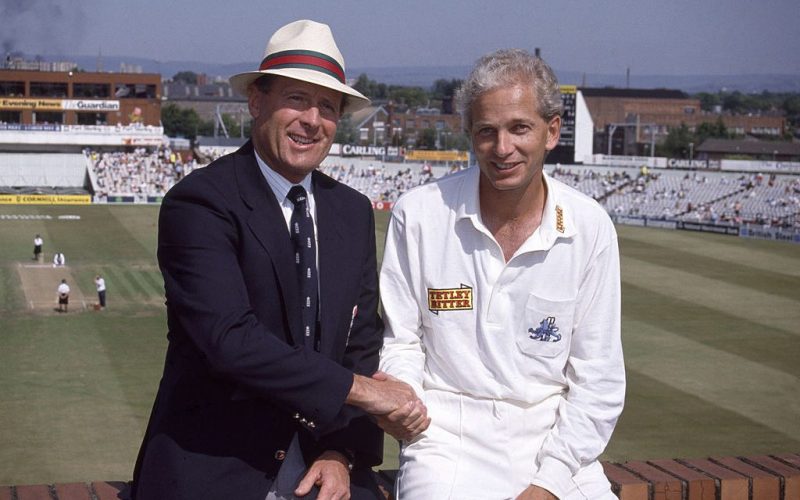 The 1980 home series against West Indies didn’t go well and I was left out towards the end of it. I was back in the team for the ’81 tour and playing really well, but not getting scores on the board. One of my proudest innings was the 150-odd not out at Sabina Park. West Indies were already in their dominant phase and the four-man pace attack was proving tough for everyone up against them. The pitch had real pace and bounce but was ultimately very true, so I got in and got runs. It’s always the quest to prove yourself against the best, and I felt I’d reached another level.

Madras was a good performance but the win at Delhi [in a 2-1 series win] was more fortuitous. Kapil Dev was still batting at tea on the final day and the feeling was if he’d just batted properly they’d have got a draw. But he slogged one into the deep, we got quick wickets and then had a bit of a chase, which Lamby [Allan Lamb] sorted out for us. I had a chat to the boys at tea – one of those angry, noisy chats – saying it was a last-gasp effort. I did angry more than people think, but you can’t overdo it because then people get used to it. 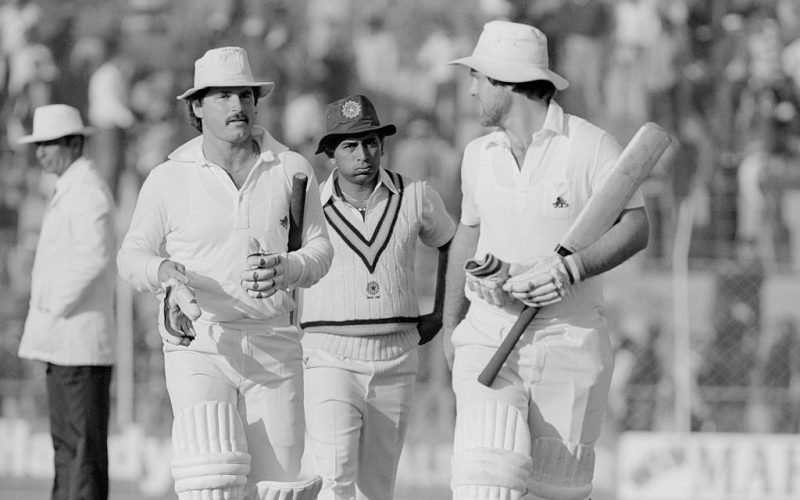 Allan Lamb and Mike Gatting walk off after England won the Delhi Test 1984, after David Gower had a “noisy” chat

Going into the final match of the series we knew that if we cocked it up and lost the Ashes would stay with Australia. We just needed a draw to take them back but still had to exude the right vibes to win. On the first day it was the sort of pitch I used to like – a bit of pace, a bit of bounce – and Gooch and I both hit hundreds. It was the perfect start and was pretty much as well as I could play. To lead the way as captain made it that much more special.

Blowing in the Windies

Another day in paradise. It was not so much a rude awakening, as a rude reminder that they were still as good as ever. But I’ve had my memory wiped. It’s a Men in Black moment. I remember there was a calypso, the title of which was Captain The Ship Is Sinking, which was written about the political situation in Trinidad, but was very quickly lumped on my shoulders. At the end of the Antigua Test [where West Indies completed a 5-0 whitewash] I said, ‘The ship is well and truly sunk, but congratulations to Viv and his boys’. It became a very debilitating experience because whatever you might say in the team talk, underneath you just think, ‘We’re not good enough’. 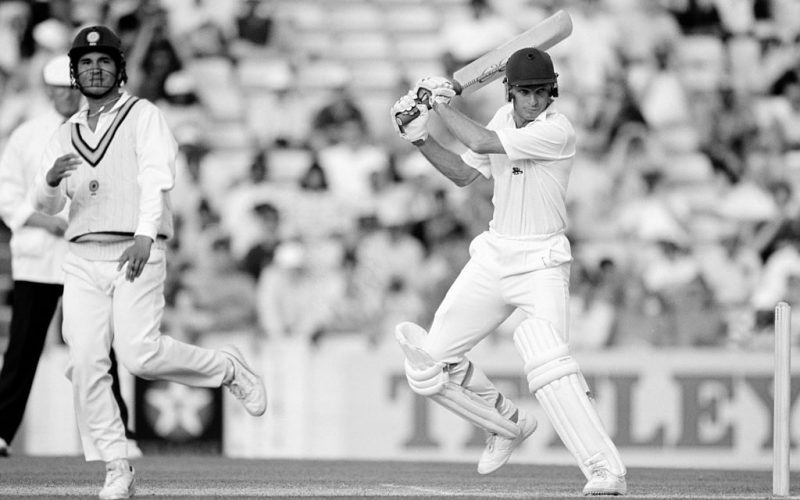 The mutterings had started about whether I’d done enough to keep my place for the Ashes. I hadn’t done very well in the first innings and on the fourth evening I’d actually been flat out on my back in the dressing room while Gooch and Atherton got runs. Then the wickets fell and I had 40 minutes batting at the end of the day where everything seemed to be working rather well. The next morning I realised a lot was hanging on my innings but I was never one to overthink things. At the end of the day I walked off thinking, ‘That’s entertaining, that will do’.

The tour of two halves 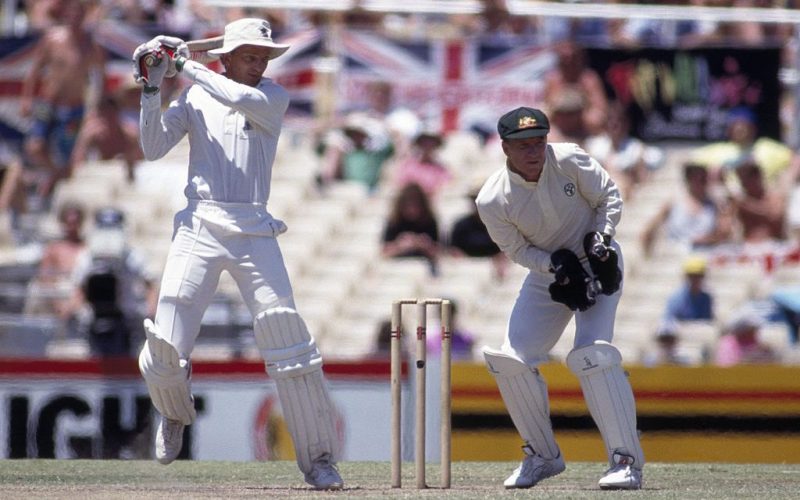 There were two very distinct parts to that tour. The first where I was getting everything right, and the end bit where it all went horribly wrong. The Sydney game was very important. We’d had a couple of days in the field which hadn’t gone particularly well, and we’d had this sort of Geoffrey Howe speech from Graham [Gooch] – ‘We’ve got to do a bit better, lads’. I’m not saying this to be vindictive but I thought it was too negative and it pissed me off. I said something and Graham wasn’t best pleased. Our relationship hadn’t reached rock bottom yet but there were differences of opinion that were bubbling over. I remember having a fairly sleepless night before I went in to bat. Athers was still there when I came in and I started well and kept going. Athers had this long head start but I almost beat him to the hundred. In the second innings Goochie said, ‘I’d like you to open with me’, and I said, ‘Oh really? Must I?’ I had a bit of a pinch-hit and we gave them a shock for a few overs but the target was always a bit too much.