Comedian and lifelong cricket-lover Mark Steel talks to Felix White about cricketing life lessons and how the game got him expelled.

Mark Steel is late. Another UK tour just completed, he’s been held up travelling from the last date in Brighton back to the gravity of his native South East London. It’s a timely conclusion for him, the solitary slog of the stand-up circuit, however popular and bespoke his are, making its mark as usual. When he turns up, rubbing his hands together at being back in Crystal Palace, he ushers me down the stairs of a ‘lovely little Lebanese place’, ordering us fresh mint teas and hummus. Before we can talk the beautiful game, there are post-tour demons to exorcise.

“It’s miserable usually [after the shows]. If you’re lucky the tech staff go, ‘See ya mate’. Then it’s empty and you’re the last person leaving the car park.” Not unnaturally for a cricket lover, he finds a quick healthy metaphor from the game to deal with the challenging dream-becomes-routine law in his chosen profession. “We’d imagine a professional cricketer is going, ‘Wow, I’ve hit a four’, but they’re thinking, ‘I’m meant to hit a four’. They probably get a pleasure out of it the same way you do when you’ve done a brilliant gig. But it’s more relief. That’s what you’re supposed to do. Then within 10 minutes you’ve got a new place where you’ve got to do it all over again. At the risk of sounding like an utterly pompous arse, not at the risk of, at the certainty of sounding like an utterly pompous arse, it is literally the same as being an astronaut.” 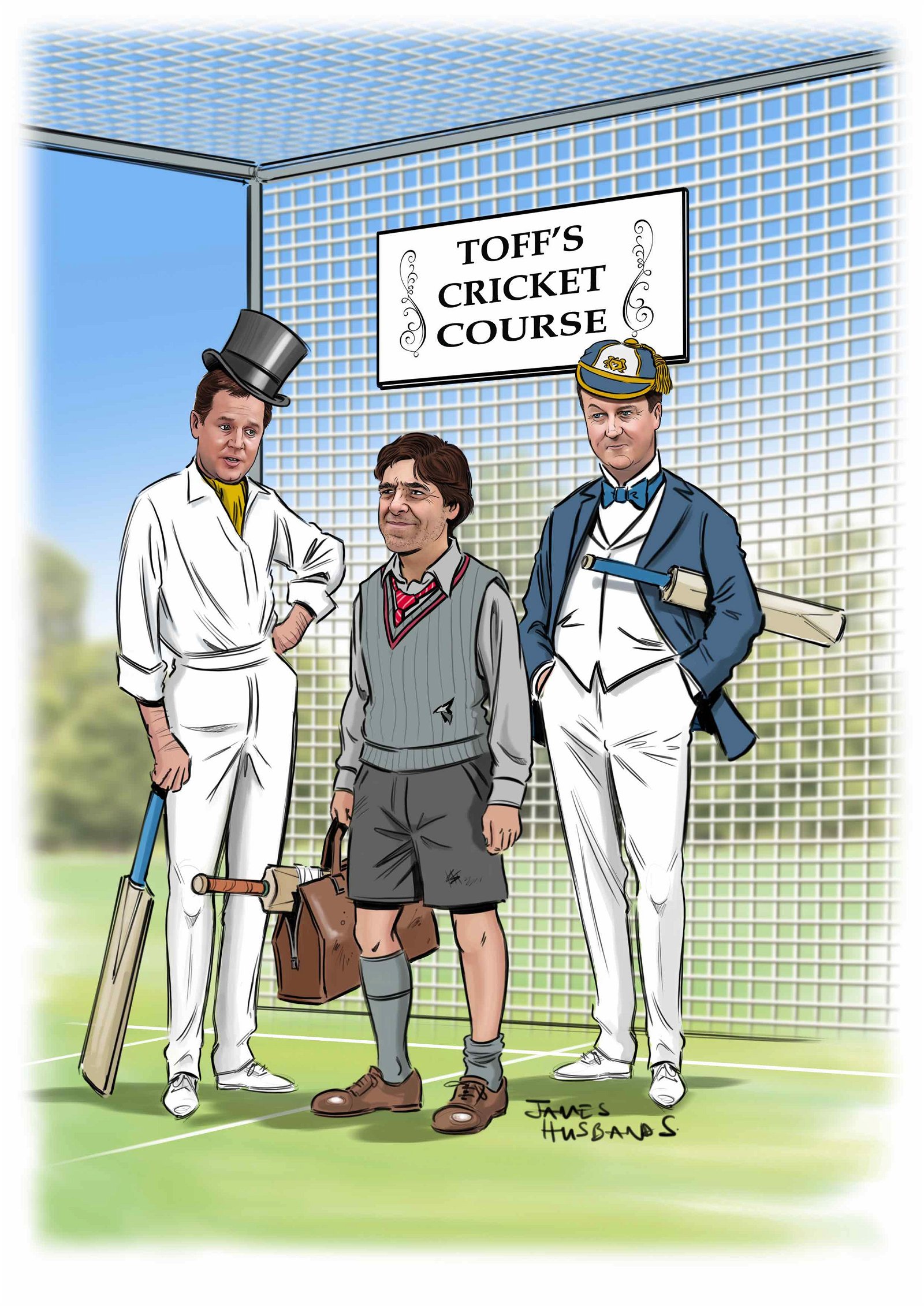 State-school educated, Mark was expelled in his mid-teens for bunking school to attend a week-long cricket course. It was only years later it occurred to him that the course was programmed to coincide solely with the public school holiday. Though equal opportunities in our country, or lack of, and the hypocrisy and injustice within, are a theme that run through much of his work, he harbours little residual resentment for this particular missed opportunity. “I always said that if I’d had the training, the coaching that the posh schools and the people that nurtured me… I’d still have been shit.”Shitness aside, he has always, and still, plays. These days it’s for the aptly titled Norwood Exiles. How does a left-thinking comedian vindicate an obsession with a game both rooted in imperialism and that continues to bias itself towards a public school system? Well, in it’s own way, the Norwood Exiles deal with these problems in-house.

“There was a staunch Conservative in the club. He was 70-something. He loved the guys in the team, especially Bilaw, a lad from Bangladesh. He’d sit there and go, ‘Immigration, it’s gone too far, we’ve got to send them back’.” Mark and the team would take it in turns to explain to him: “‘Ok well, Bilaw, he’ll have to go’. He’d be aghast. ‘Not Bilaw’. ‘Oh right. is the rule that you get deported unless you took 4-31 against Woodminster?’. He honestly said once, ‘Oh, you’ve caught me again with your fancy arguments’.”

At the risk of sounding like an utterly pompous arse, it is literally the same as being an astronaut

‘Woke’ being another interpretation for ‘fancy arguments’, it’s a point that extends itself into part of what being in a modern cricket team potentially is becoming; a kind of conscious correcting of past wrongs. Maybe this is going on all over the country, underneath the surface, in the cross-culture community it tends to uniquely forge? “Fantastic for that isn’t it. We had a guy called Renford, Jamaican guy, mad as a box of frogs, decent fast bowler. The batsman blocked the ball to him and threw it back once. Renford appealed for handled ball, he wouldn’t let it go”. Mark momentarily adopts a Jamaican accent “it’s the rules of the game, him out! Him out!” His wife used to come down and scream at him from the boundary while he was batting ‘Earn your keep! Earn your keep!”.

In the same team was a professional trombonist in a symphony orchestra, of particularly posh dialect. “He would bat like something out of the 1920s.” Mark raises his left elbow to impersonate blocking the ball. “He’d go, ‘Main thing is, don’t do anything stupid. We’ve seen that chap off’. I’d be like ‘I’m sure he’s gutted, bowling eight overs for two runs. Please, do something stupid, please’.” Mark ran him out. Still partly justifying it to himself all these years later, and now me, he explains “I had to. They were going nuts. He had three off 15 overs in a 40-over game. Those two together though, it’s just brilliant. It was like a play. If it was, you’d say, ‘no it’s too obvious.’” 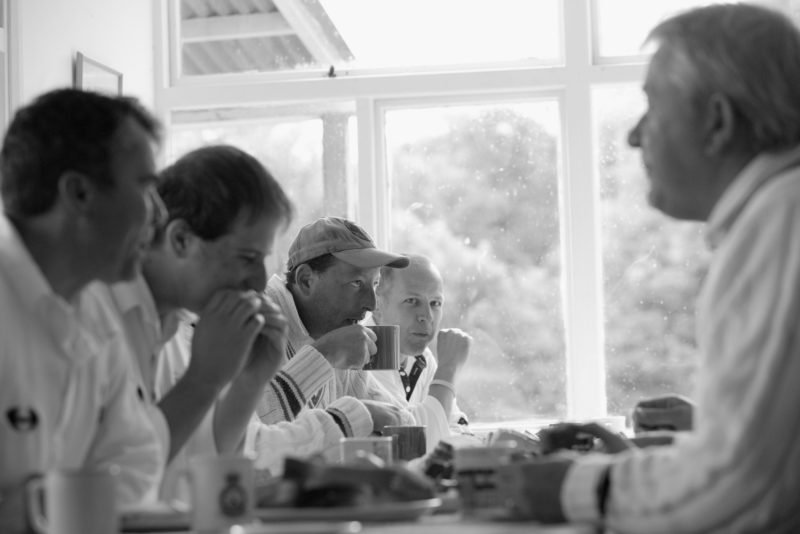 Another real-life part in the play was ‘Old Ken’ the umpire. “What a character he was. Utterly Yorkshire. He was still umpiring at 80, looked like he definitely had Parkinson’s. Batsman would nick it… [clucking the sound of a ball having the cover hit off it, before adopting a Yorkshire accent this time] NOT OUT”. Ken, he’s hit it. ‘I’ve not heard it.’ Ken, you can’t hear anything, you’re deaf’.”

As is becoming routine in these interviews, after going through a list of golden cricketing recollections, we reach 2005’s Greatest Series Ever™. Telling of those with hearts long lost to the game, there is a glint, a swoon and another personal piece of symbolic principle-vindication seized from that ever-more mythical summer. “I felt like a scientist who had some theory that everyone dismissed and then was right all along. Suddenly millions and millions of people were going, ‘Oh, now I get it!”. Making the tough decision to go to watch his beloved Crystal Palace during the Edgbaston Test, he witnessed the severity of the sea-change. “Every time the ball went out of play, it went over to the cricket on the big screen. I thought, ‘For one moment in history, cricket has won’. There was cheering for Flintoff’s innings, a Test match knock in Birmingham, mid-game at Selhurst Park. “The drama of it was just staggering.” 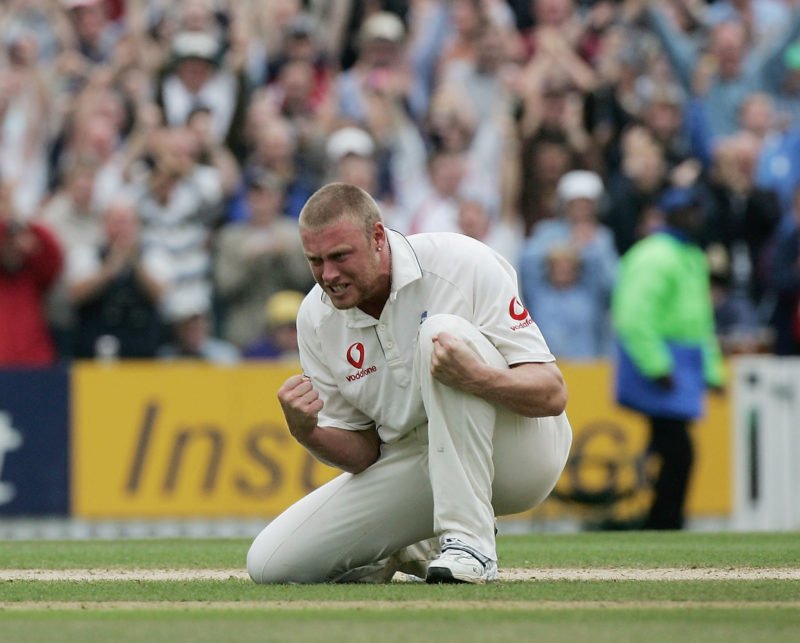 The drama of ’05 even bested football

That summer of triumph came near-on 40 years after his first Ashes experience, equally as gargantuan in its impression. England, having lost the first Test in 1968, had been on the receiving end of bad rain to scupper two certain victories and landed at the last needing to win.

Dominant again, they had set Australia an amount they couldn’t realistically chase and had all day to bowl them out. “It pissed down and looked like it would be abandoned again for a draw. I was seven and I remember being furious about the injustice of this. The whole crowd got on the pitch to mop it up, buckets, god knows what. It was so English.” All hands on deck owing, the umpires decided there could be an hour and a quarter of play that England had to bowl Australia out in. Derek Underwood, famous for taking wickets on uncovered pitches that were drying, was the man set the task. “He’d bowl fast, 55-60, it would turn and fizz and everything.” A very young Mark Steel was glued to the TV set. He remembers: “There was this amazing field of all 11 players round the bat. One by one all these Australians were getting out lbw, caught at short leg, all that.” Underwood got the last wicket with about a ball to spare. It was “Absolute joy.” He took 7 -50.

I said ‘thanks mate’ and then realised, ‘oh my god, it’s Derek Underwood’. I lost all power of speech

The cricketing gods were to deliver Mark a cyclical chance meeting with Mr Underwood many years later. Now with a seven-year-old son of his own, the two had a day out at Canterbury for some county cricket. Wholly uninterested in watching any of the game, the boy won’t relent at his dad to play with him instead. “He’s like this, ‘Bowl at me, bowl at me, bowl at me’. We’re on the pitch at lunch, still bowling at him, then through the session after, then tea, all bloody day.” Meanwhile, the game began to get interesting. “There’s an hour left of the day’s play and I’m thinking ‘I just want to sit and watch this now’. He’s still going on. Finally, I said ‘no’. Enough. He said ‘it’s not fair’.” The man in the seat in front, overhearing the day’s progression between the two and with some empathy for Steel senior, eventually turned round. ‘I’ve been watching your dad, he’s been bowling at you all day, come on, let him watch this now’. Mark, relieved to have an ally, tapped him on the shoulder, only to have a very familiar face looking back at him. “I said ‘thanks mate’ and then realised, ‘Oh my god, it’s Derek Underwood’. I was completely lost for words. I went (pointing at his son), ‘When I was his age and remember all those wickets and…’ I lost all power of speech.”

And through the other greats we move. Mainly West Indian and from the 1980s. Viv Richards (“Every aspect of the way he played was either consciously or not, an affront. A challenge. I’m not going to stand in a rigid, English way. I’m going to lollop and smile with menace chewing gum. That brilliant story when he takes them to the Long Room and says ‘this is who we’re fighting against, the people who made us slaves’”). Michael Holding (“You know the thing with acting, if you want to be really menacing when you’re angry, don’t get louder, get quieter. Like Al Pacino in Godfather. You’re making me angry. That’s like Holding. There’s something in the silence.”)

Related Story: Irfan Pathan: I could have been India’s best-ever all-rounder in ODIs

I’ve been so locked into all Mark’s stories, beginning to picture the Norwood Exiles as a wonky left-field modern version of Dad’s Army, absorbing perfect observations of perfect cricketers and noting all the ways that cricket can temporarily temper fractious parent/child reltionships, that I haven’t checked my phone. We’ve been talking for two hours. I’m very late for Tailenders (the BBC podcast with Jimmy Anderson and Greg James). Mid-last anecdote, knowing how late I am, I identify the story too good to stop him, so hear it through to its last valuable cricketing life-lesson.

“I played in the comics XI that Arthur Smith organised. One of the blokes took his son down, he took five wickets. This kid was as ecstatic as anyone has ever been, so over-enjoyed. The next week. Boof. Boof. Gets taken off. Three overs for 40. The kid is devastated. We’re getting changed at the end, the lad’s dad is laughing and joking as he always was. We were worried and asking ‘is he alright?’. He said ‘yeah, he’s great. He’s learnt a very important lesson in life. One day you’re a king, the next day you’re a c***’. I thought, ‘what a brilliant bit of parenting’. I hope he’s still playing.”

Gary Neville: ‘Cricket toughened me up more than football’