Saini, 26, was precise in his line and length as he dismissed Nicholas Pooran and Shimron Hetmyer with back-to-back deliveries in his very first over. He then came back in the death overs to remove the experienced Kieron Pollard too.

A three-wkt haul for Saini as #TeamIndia bowlers restrict West Indies to a total of 95/9 after 20 overs.#WIvIND pic.twitter.com/MMn9drOxh1

The young pacer was adjudged Man of the Match for his exceptional performance, which included a wicket-maiden 20th over that restricted West Indies to 95-9. The efforts caught the eye of Kohli, who also captains Saini at Royal Challengers Bangalore in the Indian Premier League.

“The bowlers were on top throughout. He [Saini] is a raw talent, has raw pace. He is one of them who can bowl 150 clicks and there are hardly any who bowl at that pace, and he is fit,” Kohli said during the post-match presentation. 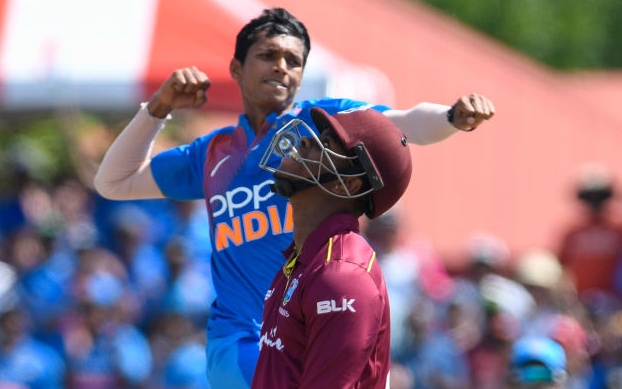 “He is someone who can build a name for himself and he is hungry as well. Hopefully, he builds on from here.”

Bhuvneshwar, too, heaped praise on the youngster, who was equally exceptional for the India A side that toured the Caribbean last month, where he was the second-highest wicket-taker, with eight wickets in four matches.

“The most important thing is he has proved himself at different stages – whether it is domestic cricket, IPL or India A,” Bhuvneshwar said. “So, when he came into the team, I was pretty confident. Just before he came into the team, they played India A in West Indies and he did well there. When you do well at the international level, it gives you confidence.”

"He is someone who can build a name for himself, and he is hungry as well"

The Karnal-born pacer made a name for himself in this year’s IPL, where he left a mark with his high pace that fetched him 11 wickets in the season.

“He bowls really quick. Like I said, the wicket wasn’t a proper wicket,” Bhuvneshwar said. “It was a bit slow. But if you look at his bowling, he is a quick bowler, he bowls at around 145-150.”