Bob Kaplan reveals how cricket might appear to a genuine outsider and ponders the reasons why we play the game at all.

The little green man came down from his jaunty yellow saucer, which had been hovering over the pitch.

“I’m an advance scout from the SDC (Super-Duper Civilization),” he explained, “which is coming to take over your broken world. I’ve got it all in my report, but there’s just one thing I don’t understand. When the ball hits the ground in front of the wooden fork, it doesn’t always go where the laws of physics say it must; and when the chap with the winnowing-fan hits it, it often flies off in the wrong direction. Are magnets involved?”

“Oh no,” Stuart groaned, “having to explain cricket to an American again!”

Derrick, our captain (chosen more for his diplomatic than tactical skills), said quietly that it was a matter of each side trying to fool the other.

“But you can’t fool the laws of physics,” the Martian pityingly explained. “Law number 13 in our Constitution reads: ‘The angle of incidence equals the angle of reflection’.” 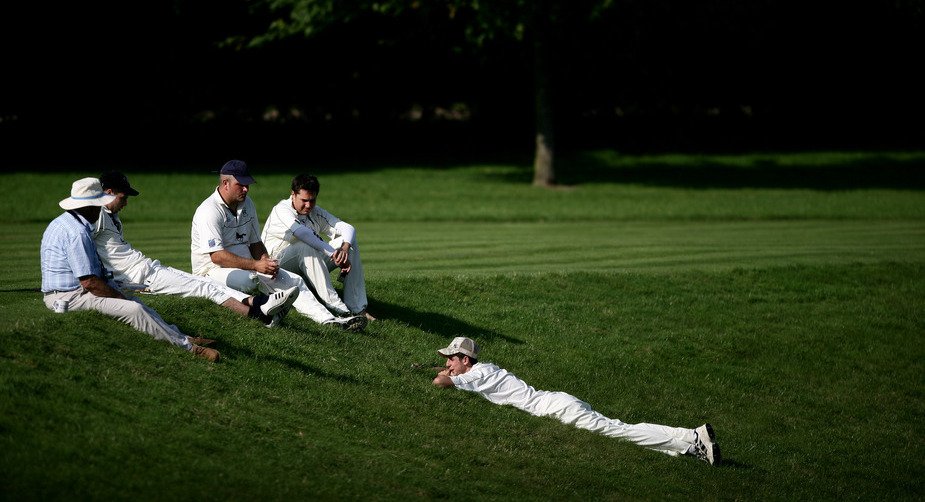 “You see,” said our spin bowler, Tom (a firm believer in reason, he’s that mad), “you can do things with polishing half the ball to make it swerve — isn’t Bernoulli’s Law in your Constitution? — and a good batsman can flick it away at the last second. It’s a game of opposite intentions.”

“Intentions…” the little man furrowed what passed for his brow, and took out his Martian–English dictionary. “Intentions – that’s tensions inside the ball?”

“It’s making things do what you want them to,” said Derrick.

Looking over his shoulder, I could see the scout cross out “second” before “-level culture” and write in “ninth”. “Things do what they do,” he said, “and my dictionary says ‘want’ is a sound without meaning. Why do you dress up in white and do this thing?”

“It’s what we’ve always done, come spring and Sundays,” said Ken (he goes in at seven and holds the line). “Our fathers did it. Our sons will do it. Daughters now too. You’re part of a bigger thing that lasts.” 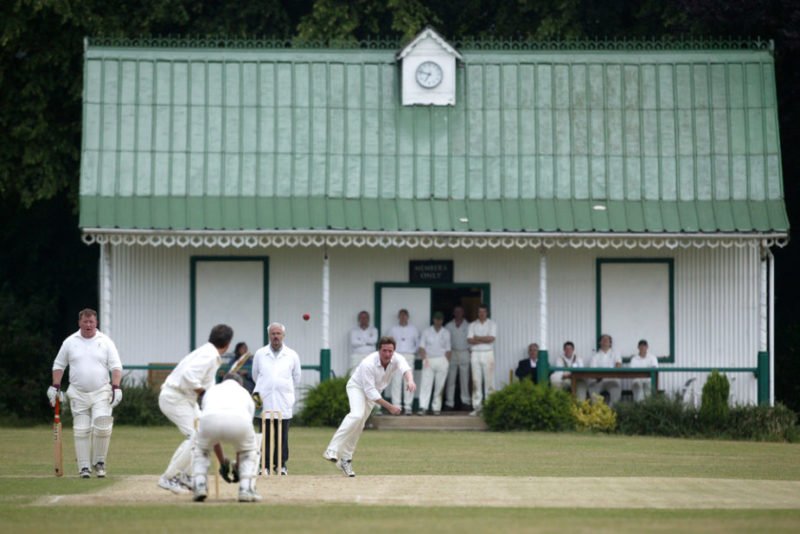 “I understand!” said the green man. “I saw it last week and talked to the others in white! They said it has been going on since people lived in the woods, and no one knew what the steps meant but performed them faithfully. But where are the bells round your shins and the clay pipes?”

“If winning is your in-tention, why do you draw?”

“They’ve both got it wrong,” said Freddie, who had been fiddling with his pads until now. “It comes out a win or a loss or a draw or even a tie (don’t ask), but the point — the point is, I don’t know, to match all your experience and instincts to the moment, and get on top of it, at full stretch.” 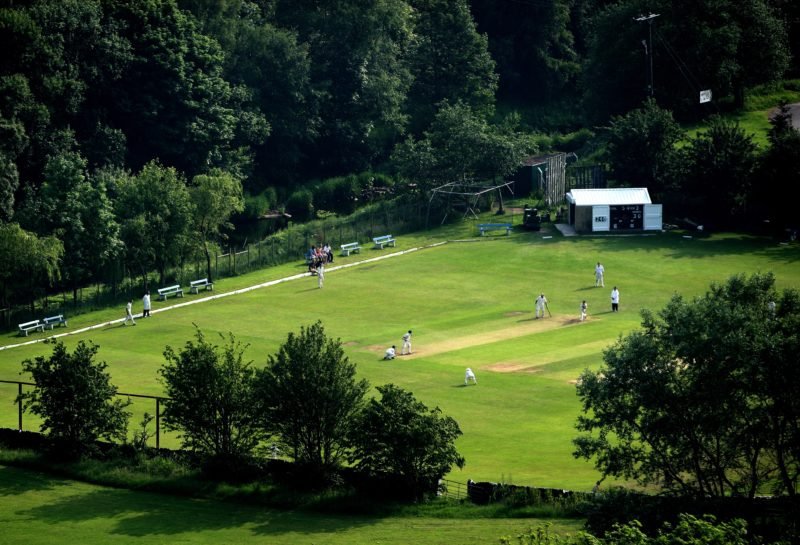 “Your other animals do this too, I’ve seen — lion cubs sharpening their responses for the serious business of staying alive. But they grow up, and you have stopped growing, I think, but go on doing it?”

“The point,” said Harry, sprawled on the grass and waking up, “is afterwards. Reliving it, in the pub. Ah, the sun coming out, under the clouds. Long shadows. Memories, dreams…”

“Dreams,” said Ken, picking Harry’s sentence up by the ears and shaking it, “that you’re one of your heroes, for a timeless moment — filling out a form larger than yourself, feeling what it would be like to have those reflexes — and for a time you do.”

“I don’t know if you’ll get this,” said Alistair, “but we keep to ourselves, mostly, and then there’s ways of palling around — that may not be in your Constitution. Kind of taking others to be enough like you to say a bit of what’s on your mind. The game’s an excuse for that.”

“The point is afterwards. Reliving it, in the pub. Ah, the sun coming out, under the clouds. Long shadows. Memories, dreams…

“Look,” our medium-pace bowler, Bill, broke in, “it’s one of those things or another, but it’s also this. I don’t know how you do it on Mars, but we live in a world of selling – goods, services, ourselves – to one another, and you talk it all up to make it sell better until there’s hardly an honest breath you can draw — but not out here, where we’re free of all that. It’s just what it is, for a sunny or windy or rainy afternoon.”

“Or all three,” said David.

“I make my way through a game by guile,” said Tom, “which is selling flight by deception. It lets you do that, it eggs you on, this absurd game. I love it because it’s absurd!”

I couldn’t resist adding my bit. “Those laws of yours, and your Constitution — cricket has its rules too, but talk about absurd! You have to ask if a rule applies in order to enable it! Some rules carry no penalty for breaking them, or even ways to enforce them: ‘The umpires shall make frequent and irregular inspections of the ball.’ But what if they inspect it too regularly? These aren’t so much rules as pieces of good advice, the pub spirit carried into the game. Cricket is an intricate machine that has laws but doesn’t work by so much as around them. It’s got hidden balances and improvisations and compromises, and you keep changing what you’re doing, on the spot, to make it work in your direction. And if you want to know what ‘want’ means, it’s about that direction.”

The little green man was running out of steel ribbon to punch his notes in, and I thought he was running out of patience with us too. “It was simple, seeing it from up there,” he said, “a pin-ball machine that didn’t work very well. Down here apparently none of you have the least or even the same idea of what you’re doing.”

“None of you has,” corrected Tim, a schoolmaster whose quick hands around the bat made up for a slight leaning toward pedantry.

The scout from Mars gave him what I took to be a withering look, jotted down: “Three million years away from colonization,” slid his clipboard into his mouth and climbed up the ladder into his hatch. We waved goodbye but he didn’t wave back. Phuuuuutt!

This article first appeared in issue 1 of The Nightwatchman, the Wisden Cricket Quarterly