Tics, superstitions and elaborate routines are all part of a cricketer’s psychological armoury. But they can’t always mask the stresses lurking beneath the surface, writes our secret cricketer for Wisden Cricket Monthly.

When I was younger we had a batsman in our team who would sit there, resting his bat between his legs, and no one was allowed to touch it. If anyone touched his bat, or picked it up and played a few shots with it, he had to go and get another one. So I used to sit next to him and touch his bat, which forced him to go and replace it, and then I’d touch the replacement. It would go on for hours! He didn’t last that long in the game. I used to wind him up about it. But now, whenever I’m waiting to bat, I don’t like people touching my bat either!

Young players seem to turn up full of confidence. I always look at them and think, ‘How long is that gonna last?’

Another guy from that era had to be last out of the changing room, and because I’d picked up on it, I’d pretend to do my shoelaces, or I’d take ages styling my hair in the mirror if it was a TV game, and he’d be still there waiting for me! The best one, of course, was Neil McKenzie, who played for South Africa and Hampshire. He would tape his bat to the dressing room ceiling, only to take it down to use out in the middle, and then tape it back up again when he was out. 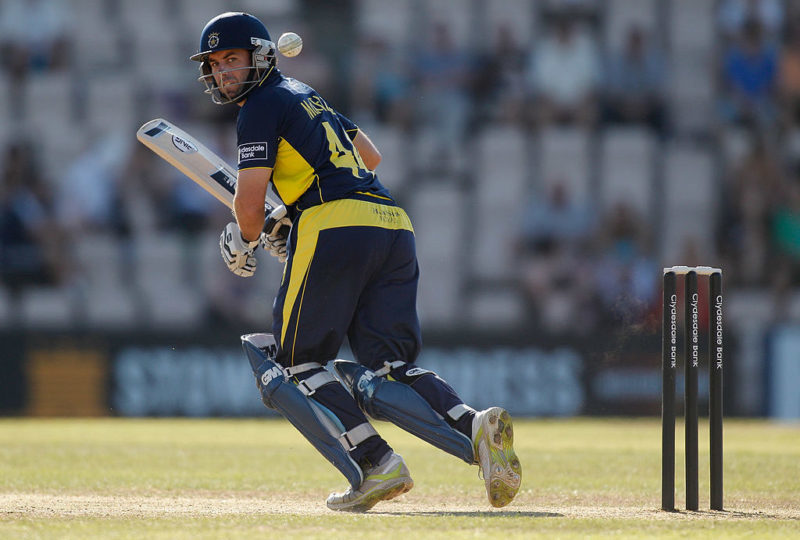 Neil McKenzie played for Hampshire for 7 years as a Kolpak

Batting is all about repetition and routine. You can see why batting spins your head out. I played with a guy who’d back away a few yards, spin his bat around, lean his bat against his hip, unfasten his gloves, do them up again, and all between deliveries. He didn’t do it when he was younger. Only when the game got a bit much. Not to the same extent, but I’ve got my own triggers, to make me switch on and off between balls, otherwise you’re nowhere.

Young batters coming through these days are quite carefree. It’s rare to find an intense young player. They all seem to turn up full of confidence, believing they’re going to win every game, and I always look at them and think, ‘How long is that gonna last?’ The game always takes its toll. Overall it’s got to be better that way, but I’ve played with some players for whom it’s the opposite. The intensity got to them early and drove them away from the game.

I can think of one player in particular who had no release from the pressures of the game, and it began to eat away at him

It’s undoubtedly a more serious game than it used to be, but there has to be a trade-off. It’s more professional, and you’re well paid, but it’s serious stuff now. When you were a kid you’d play purely for the love of it. No pressure to perform, no contract to fight for. You’re playing with your mates every week, but as soon as someone puts a contract in your face, with the proviso that you’ve got to take a certain amount of wickets or make a certain number of runs, you’ve always got that anxiety hanging over you. You’ve got a family to support, you’ve got a mortgage to pay.

It is a job, but thankfully I’ve never lost sight of the fun element, even when I’ve been struggling for form. But for guys who have been unsure of their place in the first team, it can be horrible, and I’ve seen players who fall away from the game because of that stress.

I can think of one player in particular who had no release from the pressures of the game. He didn’t have any escape route, and it began to eat away at him. He’s still playing, but only because he spoke to experienced players and found a way to relax, to go out and have a beer with the lads and not take it quite as seriously. If you can’t enjoy it, you’ve got to find something else to do. Otherwise, you’ll get engulfed by it, and the game and the job will eat you alive.

I think the ICC has missed a trick in reducing the number of countries in the World Cup. It’s a global event with only 10 teams. Scotland aren’t there and they beat England last year! It’s ridiculous. The Associate nations are getting stronger and yet they’re not included. It’s disappointing, especially in England, where there are so many nationalities to come out and support their teams.

Is cricket going to be a more popular sport in a few weeks’ time? I would say that if England win, it’s got a very good chance. But I still think some of it has to be on free-to-air TV. Imagine if England were to get to the final and only a limited number of people could watch it?

I saw a stat recently that 600,000 people watched one of the England group games on Sky, and on the same weekend something like 6 million watched an England Women’s football game that was shown on the BBC. As players we’re very lucky that Sky’s financial commitment to the game means that we get paid well, but I grew up watching cricket on TV; it was a normal thing. There’s so much cricket played now, there’s no excuse for nothing at all to be on terrestrial TV. This is a World Cup. The ECB are obsessed with spreading the word as much as possible. Surely there comes a point where something has to give. It needs to be made more accessible. If England get to the final it will be interesting to see if the match is made available on a free-to-air platform. It could make a big difference.