In an interview in the latest issue of Wisden Cricket Monthly, Mark Ramprakash revealed his thoughts on England’s continual struggle with the bat in Test cricket, following his stint as England batting coach.

Ramprakash, who was England’s batting coach for a five-year period from 2014 to early 2019, was asked by Wisden Cricket Monthly‘s editor-at-large John Stern if he’d had an impact on the England batsmen. “I don’t know, I really don’t know. I’m not sure how to evaluate my time,” he told Wisden Cricket Monthly. “On the one hand I could have been stronger, and I could have been a bit more… interacted a bit more and been a bit stronger with my thoughts at times.

“But then I also know that you have to give players space to think for themselves, to breathe and go out and play their game. Sometimes, you almost have to allow them to struggle so there’s a learning from it.” 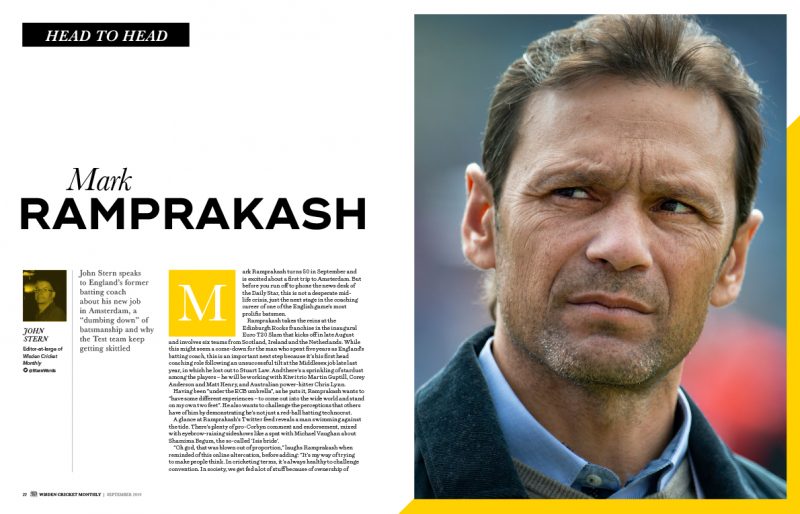 Ramprakash, who played 52 Tests for England, blamed England’s recent batting shortcomings partially on the “dumbing down of batting,” as the rise of limited-overs cricket has taken the focus away from “old-fashioned” batting values.

“We have been shot out for some low scores but a lot of our players are very good one-day cricketers, so it’s sort of inevitable,” said Ramprakash. “There has been a shift in mentality with so many players gravitating towards the shorter format – the fun of hitting the ball that doesn’t move around much and the big crowds. There is a mentality to it of ‘Go and enjoy yourself and if you don’t come off don’t worry about it’. I was talking to Michael Carberry recently about valuing your wicket, balancing risk and reward, patience, batting time, wearing down the bowlers – these are old-fashioned things, I know, but it’s what a batsman has to contend with in Test cricket.”

“We have fewer players who want to embrace those skills and that’s partly due to the last three years prioritising white-ball cricket. Because of white-ball cricket, there’s a sense of ‘don’t overthink it’, ‘don’t hit too many balls’, ‘I want to feel relaxed in my mind.’ To me that is a slight dumbing down of batting. The art of batting is thorough preparation, knowing the challenges the opposition will present, practising those and also practising your strengths.”

The full interview with Mark Ramprakash can be found in issue 23 of Wisden Cricket Monthly. Order here.