This summer England’s physical disability side will compete on home soil in the world cricket series – a landmark tournament for a burgeoning game. Steve Morgan, writing for Wisden Cricket Monthly, went to meet the squad at a two-day training camp in Loughborough.

Hit flat, true and accompanied by a brutal whip-crack, the ball is still gathering pace as it thuds against the back wall of the National Cricket Performance Centre in Loughborough. Fifty yards away, the face of Matt Askin is masked by his helmet grille, but he’d be forgiven a broad grin. Ditching his prosthetic arm has given him a new lease of life. Flourishing his bat as if it weighed no more than a cheerleader’s baton, he now larrups it further and faster than ever.

“Our most-improved player over the last couple of years,” enthuses Liam Thomas, vice-captain of England’s physical disability (PD) side. By day teachers, tilers, students, water workers and er, biscuit exporters, the remarkable bond cricket has forged within the team is clear watching them watch each other. “Hitting sixes with one hand, eh?” adds Thomas. “Amazing.” Earlier, left-hander Thomas nailed a succession of lofted drives facing the Merlyn bowling machine with immaculate footwork. His right leg ends just below the knee.

"This isn't a sympathy set-up. It's educating people - getting away from the 'oh, bless them, isn't that nice?' attitude"

Snapshots like these are everywhere across 48 hours spent with the England PD squad. Like their batting – replete with modern smarts; tips, scoops and reverse sweeps – they smash preconceived notions out of the park. Until you get your bearings, it can seem almost otherworldly. There are stories of battles against the odds, made even more affecting by the candid, matter-of-factness with which they are shared. But that narrative is tried, tested and, frankly, tired. Teenage bone cancer, amputation, club feet and missing limbs are emotive back-stories that lend themselves to slow-mo, black-and-white montages with swelling strings, but sympathy is neither sought, nor required. 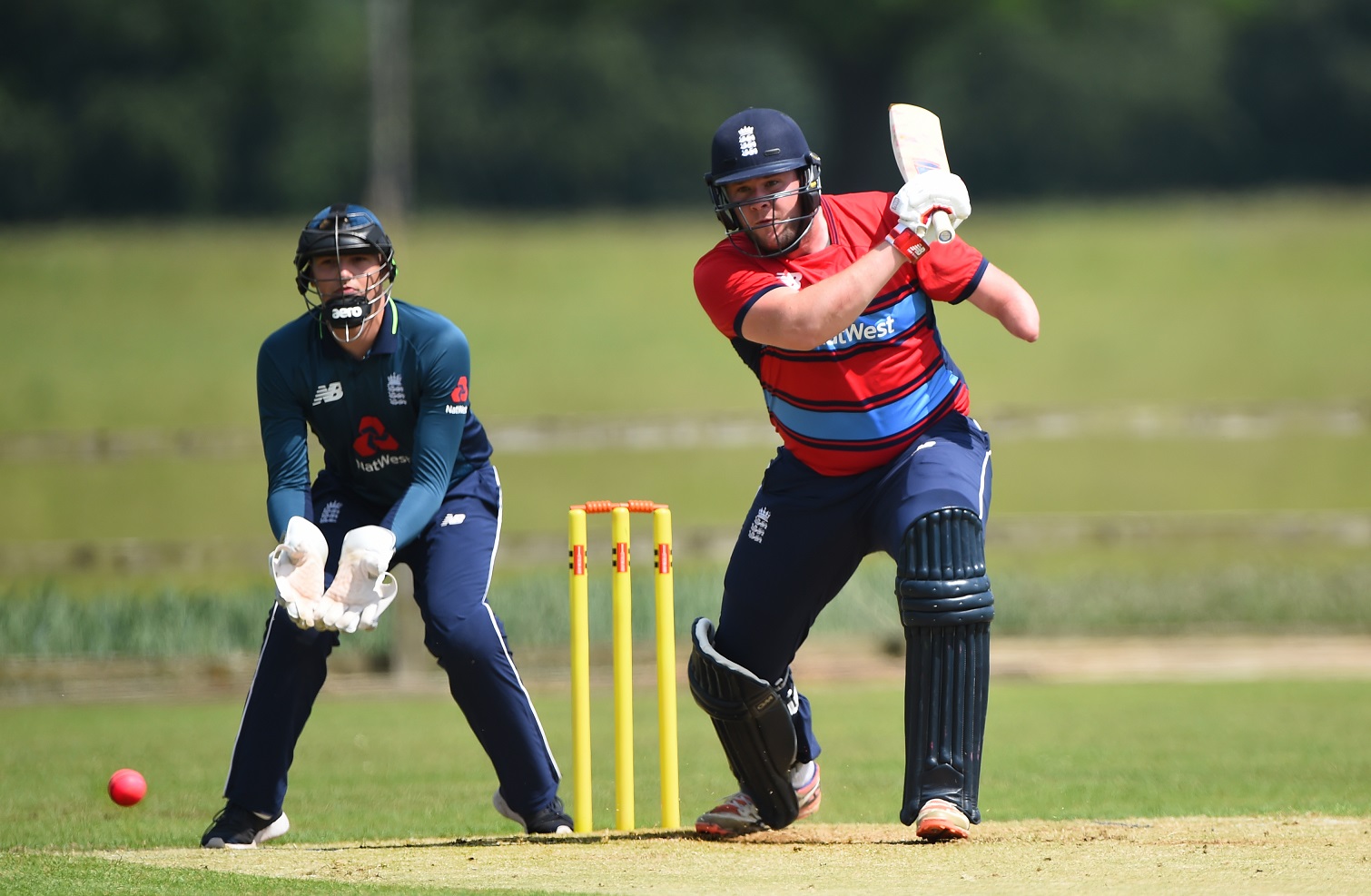 Respect and the stage to perform on. That’ll do. That’s why they’re here. This is the cream of a burgeoning sport, out to inspire the next generation by normalising their handicaps.

Joining the PD elite at Loughborough are their counterparts from England’s deaf squad. This innovative joint residential camp has been designed to bring four sides with distinct cultures – PD, deaf, LD (learning disabled) and VI (visually impaired) – closer underneath the overall disability umbrella. 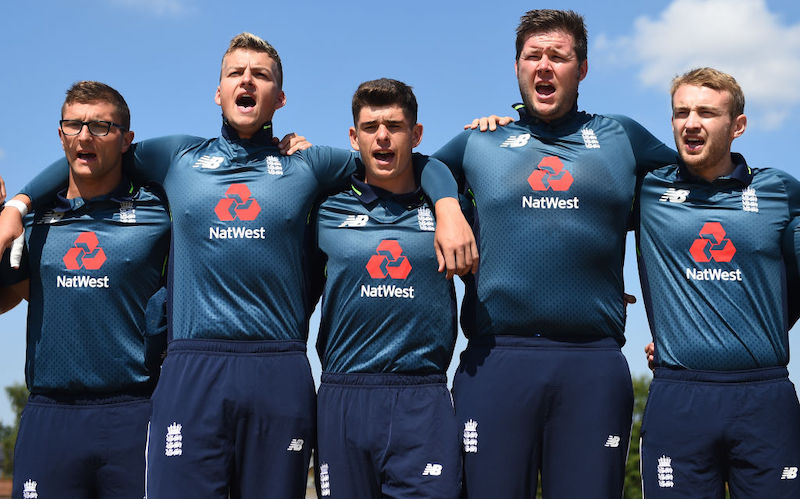 Sizing each other up in open net sessions lends proceedings a keen edge on the cusp of a pivotal season, for the PD lads in particular. If the sharp cricketing focus will inevitably be on Eoin Morgan and Joe Root’s sides’ bid for World Cup and Ashes glory, England PD have eyes on their own prize.

The first Physical Disability World Cricket Series – six teams duking it out this summer across eight days of T20 action in the West Midlands – is one all concerned hope will be a kicker, not just for PD cricket, but disability cricket as a whole; the equivalent of the ‘Shrubsole effect’ that so dramatically spiked interest in the women’s game. The hope is that all games will be streamed live. Millions will watch in Bangladesh, where England’s victorious PD squad were mobbed for autographs during the Red Cross tournament in 2015. India’s involvement, backed by the BCCI, could be a huge game-changer.

It’s a watershed moment for backroom veterans Ian Martin, ECB’s head of disability cricket since 2007, and operations manager Neil Bradshaw. Martin brokered the first PD international, between England and Pakistan in 2012. Bradshaw, who oversees logistics across the board, gave up his Matalan warehouse shift manager’s gig to go full-time last year. His initial involvement, a decade back in Cheshire, was done as a favour. “I got into it simply because I fancied a pint at a cricket club,” he chuckles. “I saw 10-12 disabled kids running their own warm-up, so just started helping out.” 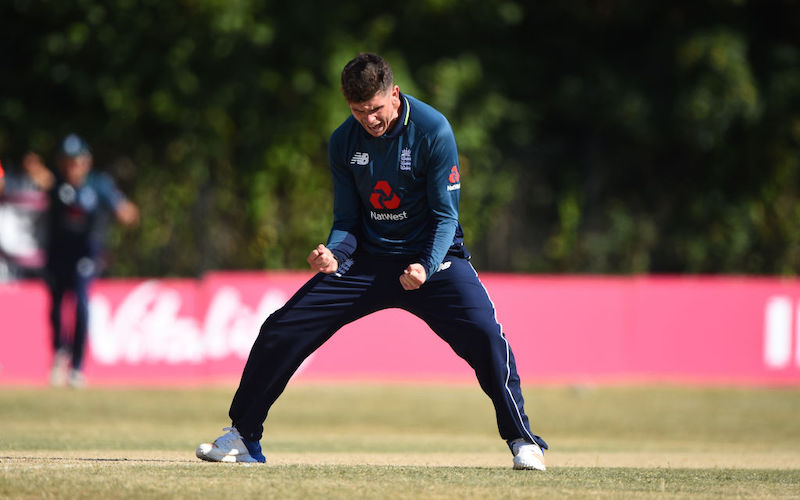 Martin and Bradshaw – die-hard Everton and Liverpool fans respectively – are a close-knit pair who have built patiently towards this moment. As Bradshaw sees it, fate dealt these cricketers a different path; his remit is to push the envelope in search of validity. “That’s where our frustration lies,” he says. “This isn’t a sympathy set-up because these lads can’t get access to their cricket anywhere else – the standard’s really high. It’s educating people – getting away from the ‘Oh, bless them, isn’t that nice?’ attitude. People don’t understand the game until they’ve seen the game.”

Pakistan, victors in last year’s tri-series in England, are first up at Kidderminster on August 5, followed by India, Afghanistan, Bangladesh and Zimbabwe, with the top two sides meeting in the final at New Road, Worcester on August 13.

Finding footage of their opponents is like digging for truffles, the notion of compiling dossiers on ever-changing sides a pipe dream. In contrast, England’s PD squad – there’s also a second-string Lions squad – is pretty settled, and bolstered by the addition of feisty all-rounder Liam O’Brien, who struck memorable half-centuries against Pakistan last year. Even the relatively young are seasoned performers. Batsman Callum Flynn, 24, and spinner Dan Hamm, 23, recall being nicknamed ‘Fatty 1’ and ‘Fatty 2’ due to their puppy fat when they were called up at 16. 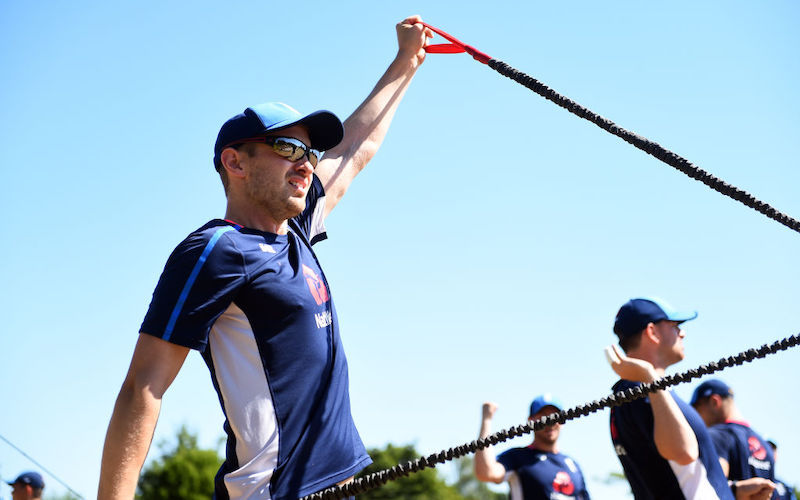 ‘The joker’ Dan Hamm goes through his pre-match preparation

Hamm is the joker in the pack. As everyone prepares to leave on Sunday afternoon, he alights on Askin’s discarded prosthesis. “Look!” he says, waving it like a triumphant detective cracking a case, “we’ve found this – which must mean… there’s a body somewhere!” Askin, clearly familiar with this sketch, just raises his eyes, smiles and shrugs his shoulders.

The squad assemble early on a crisp, sunny Saturday morning against a university backdrop already alive with the sound of clashing hockey sticks on neighbouring astro pitches. Greeting hugs, stretches and introductory chats are followed by a run-through of the weekend’s itinerary, delivered by PD head coach and former England, Surrey and Sussex leg-spinner Ian Salisbury, Mark Nash – brother of Nottinghamshire’s Chris – who is Salisbury’s counterpart for the deaf team, and bowling coach James Kirtley, another ex-England man, and another ex-Sussex stalwart.

Nottinghamshire and former England coach Peter Moores – clearly hugely revered by all – arrives later to conduct a vigorous afternoon session with the keepers. Performance analyst Chris Highton is on hand to crunch the numbers and go through footage. Tweaks and ailments are tended by physios Scott Gormley and Richard Olejar, the latter a quietly-spoken Slovakian taekwondo international, known as ‘the assassin’ for reasons that later become clear. Where front of house is concerned there’s Sula Gleeson, the long-standing freelance signer for the deaf team and a dry, wisecracking presence.

"Everyone’s got their own battles, ours are just more visible"

After a couple of hours of power hitting against the bowling machines, there’s a performance analysis seminar from Highton, who urges the players to embrace the data and make it work for them. “It’s about making strengths super strengths and weaknesses strengths,” he says. Then it’s down to the nitty gritty: batters versus bowlers in a series of T20 scenarios. Fielding drills complete the afternoon’s work.

It’s with bat and ball in hand that competitive instincts seriously kick in. The most eye-catching exchange – and there are a few as the teams feel each other out in half-hour powerplay, middle and death-over scenarios – is between deaf speedster George Greenway, capable of whistling it down at almost 80mph, and O’Brien, who is not given to taking backward steps.

“Make sure you say he didn’t get me out,” the latter says of his tussle. He’s only half-joking. The Greenway-O’Brien face-off – “a real ‘I’m better than you’ contest, almost bastard v bastard,” purrs Neil Bradshaw – along with Hugo Hammond’s now-you-see-me-now-you-don’t movement at the crease are fascinating viewing. Hammond’s funky approach is not to Callum Flynn’s taste. “I’m a proper purist,” he says, clucking as Hammond swishes and misses after a side-step. “H! Just stand still and whack it miles!” offers Liam Thomas.

All the while, coaches Salisbury, Nash and Kirtley watch on. “Play and explore,” Kirtley tells the group, while Nash enthusiastically outlines the increased confidence and kudos representing England has given his charges. 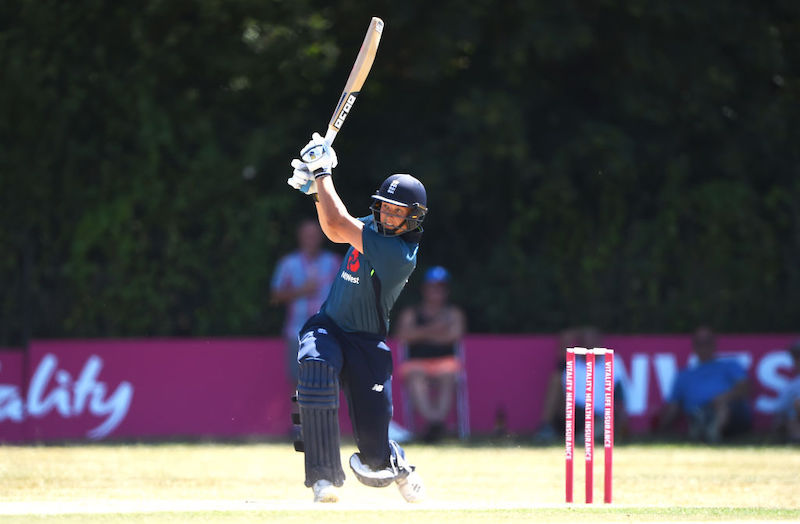 There’s a neat symmetry in Salisbury and Kirtley’s involvement, with both facing significant hurdles in successful playing careers. Salisbury was saddled with the ‘English Shane Warne’ tag – a hospital pass if ever there was one – while Kirtley’s perpetual struggle with question marks surrounding the legality of his action put him through many hard yards himself at Loughborough, wired up and monitored. When he praises Salisbury’s “empathy and authenticity” he could just as easily be talking about himself.

Liam Thomas, a 25-year-old with a sixth-month old son, was downgraded to the Lions set-up a couple of years back and has returned with renewed vigour. He talks glowingly and with disarming candour about Salisbury’s influence on him. “When I’m strong, I’m really strong – one of the strongest around, but when I’m weak, I’m just a wreck,” he says. “Still, everyone’s got their own battles, ours are just more visible.”

Honesty, friendship and integrity, winning on and off the pitch: these are constantly recurring themes across the weekend. Saturday evening is spent at the campus bar enjoying a couple of well-earned drinks during which the squads start to mingle – Kirtley’s memorable catch in an ODI against India in 2002 to dismiss Sourav Ganguly is dug out on YouTube to an appreciative huddle. Salisbury doesn’t bang the drum about curfews. He doesn’t have to. Several of the players retreat to their digs before last orders.

Sunday morning reveals why Richard Olejar is known as ‘the assassin’. At 9am both squads – and, at Salisbury’s insistence, your 50-year-old correspondent – warm up with Olejar. For 45 minutes we’re put through a series of hops and/or leaps, up one, two, and then three steps. Scott Gormley’s mobile blares out the Rocky theme as we pound the concrete. Then it’s rigorous stretching before getting down to work again on T20 scenarios. We finish around 4pm.

Salisbury and Nash wrap up the weekend – everyone is thanked, no one is left out – then everyone goes their separate ways, back to the day jobs on Monday. There’s a wistful, end-of-school-term air as the players drift away.

The following month the squads revert to their own regular meets. The next assignment for the deaf squad, who don’t have a major event this summer but, alongside the visually impaired side will compete for the Ashes next year, is a trip to La Manga for an eight-team tournament against teams including Spain, the Royal Engineers and some handy club sides, which they win. The PD squad continue their preparations for August’s World Cricket Series.

I mention to Matt Askin that time has raced by – 48 hours gone in what seems like five minutes. “Yeah,” he says, smiling broadly. “I never want to go home.”