Phil Walker speaks to a handful of frontrunners fighting on one of the game’s key battlegrounds.

Cricket edges into the century’s third decade with a deeper understanding of its darkest problem than at any other point in the last 20 years. Two decades on since the Hansie Cronje ‘leather jacket’ Test, a general assertion has taken hold that the game is cleaner than at any other time in recent memory.

That’s the good news. The bad news is that corrupters, lurking in the shadows, preying on the weak – and with new openings through social-media channels – are an ineradicable part of professional sport. The other bit of bad news is that human weakness remains a remarkably resilient concept.

James Pyemont, the cricketer turned copper who’s now the ECB’s head of integrity, is one of many in the vanguard of the fight against corrupters and the corruptible. “We want to do everything we can to ensure that what people watch and see is clean, that’s the point of it all,” he says. “But if people do transgress, then we have everything in place to prosecute those who do step over the line.”

According to the head of the ICC’s Anti-Corruption Unit (ACU), Alex Marshall, another former policeman who’s turned his magnifying glass to cricket, the ECB’s unit is among the sturdiest in the world. Pyemont and his colleague Hayley Green, in cahoots with the Professional Cricketers’ Association, deliver a programme of education and prevention to male and female cricketers to ensure that nobody inside the game, from administrators and coaches to academy starlets up to Test cricketers, can claim ignorance of the rules, or unawareness of the implications of breaking them.

“Fundamentally,” says Pyemont, “it boils down to people. The things that get people into trouble in 2020 in any sphere, in relation to integrity and corruption, will be essentially the same as for the last 10 millennia. That’s why our programmes are set up to be as human and as empathetic as possible.”

The act of manipulating the outcome of cricket matches for money, whether by fixing the result (match-fixing) or fixing a specific moment within a match (spot-fixing), has done more to scandalise the modern game than all other deeds of skulduggery combined. Ian Thomas, the former Glamorgan batsman who now fronts up the PCA’s anti-corruption wing, puts it succinctly: “You only need one scandal for it to have a catastrophic effect on the game.” One is surely bad enough. Cricket has weathered plenty more than that in this century alone.

While English cricket itself remains relatively inoculated, the slew of short-format franchise leagues around the world and the ease of movement for individuals has made the global game more connected than ever. English cricketers often travel during the winter months, often to far-flung places to play in new tournaments, and the more obscure the enterprise, the higher the risk of being lured in. Every major cricketing nation has an anti-corruption unit wired through to the ICC; the sharing of intelligence and the prosecution of preventative measures is necessarily joined up throughout the game. 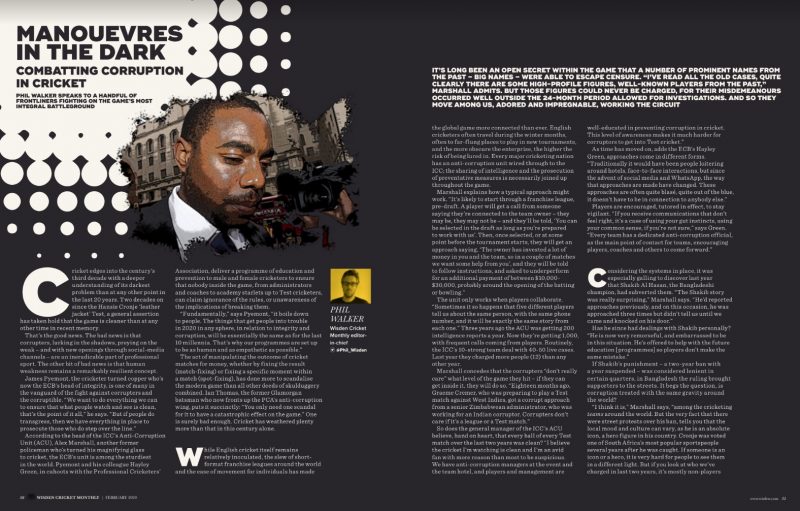 Issue 28 of Wisden Cricket Monthly includes a special report on the state of English cricket. Subscribe to the magazine here

Marshall explains how a typical approach might work. “It’s likely to start through a franchise league, pre-draft. A player will get a call from someone saying they’re connected to the team owner – they may be, they may not be – and they’ll be told, ‘You can be selected in the draft as long as you’re prepared to work with us’. Then, once selected, or at some point before the tournament starts, they will get an approach saying, ‘The owner has invested a lot of money in you and the team, so in a couple of matches we want some help from you’, and they will be told to follow instructions, and asked to underperform for an additional payment of between $10,000-$30,000, probably around the opening of the batting or bowling.”

The unit only works when players collaborate. “Sometimes it so happens that five different players tell us about the same person, with the same phone number, and it will be exactly the same story from each one.” Three years ago the ACU was getting 200 intelligence reports a year. Now they’re getting 1,000, with frequent calls coming from players. Routinely, the ICC’s 10-strong team deal with 40-50 live cases. Last year they charged more people (12) than any other year.

Marshall concedes that the corrupters “don’t really care” what level of the game they hit – if they can get inside it, they will do so. “Eighteen months ago, Graeme Cremer, who was preparing to play a Test match against West Indies, got a corrupt approach from a senior Zimbabwean administrator, who was working for an Indian corruptor. Corrupters don’t care if it’s a league or a Test match.”

So does the general manager of the ICC’s ACU believe, hand on heart, that every ball of every Test match over the last two years was clean? “I believe the cricket I’m watching is clean and I’m an avid fan with more reason than most to be suspicious. We have anti-corruption managers at the event and the team hotel, and players and management are well-educated in preventing corruption in cricket. This level of awareness makes it much harder for corruptors to get into Test cricket.”

As time has moved on, adds the ECB’s Hayley Green, approaches come in different forms. “Traditionally it would have been people loitering around hotels, face-to-face interactions, but since the advent of social media and WhatsApp, the way that approaches are made have changed. These approaches are often quite blasé, quite out of the blue, it doesn’t have to be in connection to anybody else.”

Players are encouraged, tutored in effect, to stay vigilant. “If you receive communications that don’t feel right, it’s a case of using your gut instincts, using your common sense, if you’re not sure,” says Green. “Every team has a dedicated anti-corruption official, as the main point of contact for teams, encouraging players, coaches and others to come forward.”

Considering the systems in place, it was especially galling to discover last year that Shakib Al Hasan, the Bangladeshi champion, had subverted them. “The Shakib story was really surprising,” Marshall says. “He’d reported approaches previously, and on this occasion, he was approached three times but didn’t tell us until we came and knocked on his door.”

Has he since had dealings with Shakib personally? “He is now very remorseful, and embarrassed to be in this situation. He’s offered to help with the future education [programmes] so players don’t make the same mistake.”

If Shakib’s punishment – a two-year ban with a year suspended – was considered lenient in certain quarters, in Bangladesh the ruling brought supporters to the streets. It begs the question, is corruption treated with the same gravity around the world?

Shakib: “I want cricket to be a corruption free sport and I am looking forward to working with the ICC ACU team to support their education programme and ensure young players don’t make the same mistake I did.”https://t.co/emmEKYrl1O

“I think it is,” Marshall says, “among the cricketing teams around the world. But the very fact that there were street protests over his ban tells you that the local mood and culture can vary, as he is an absolute icon, a hero figure in his country. Cronje was voted one of South Africa’s most popular sportspeople several years after he was caught. If someone is an icon or a hero, it is very hard for people to see them in a different light. But if you look at who we’ve charged in last two years, it’s mostly non-players – administrators, management, analysts, coaches, board members and a couple of players.”

The Shakib horror story followed that of Sanath Jayasuriya, the former Sri Lanka captain turned chairman of selectors, whose refusal to hand over his mobile phone as part of an ICC investigation into corruption in Sri Lankan cricket resulted in a two-year ban from all cricket. That ban was handed out in February 2019, just a month after the ICC held an unprecedented 15-day amnesty for all figures who came under Sri Lanka Cricket’s anti-corruption code.

“When I came in a lot of people around the world of cricket told me that the ICC would never go after the top-end, famous, highly-ranked people, which seemed a mystery to me because I’ll investigate anyone,” says Marshall. “It was a big moment in cricket [the Jayasuriya ban] and it did make people react. I think it led to a lot of people being more open.”

It’s long been an open secret within the game that a number of prominent names from the past – big names – were able to escape censure. “I’ve read all the old cases, quite clearly there are some high-profile figures, well-known players from the past,” Marshall admits. But those figures could never be charged, for their misdemeanours occurred well outside the 24-month period allowed for investigations. And so they move among us, adored and impregnable, working the circuit. “I was very unhappy when Jayasuriya appeared [in the crowd] at the World Cup,” Marshall adds. “We were talking about a live, serious corruption scandal, he was persona non grata as far as I was concerned.”

English cricket’s tightknit world experienced its own wake-up call in 2010, when the news broke that a promising fast bowler, Essex’s Mervyn Westfield, had the previous season accepted £6,000 to underperform in a televised 40-over match. Westfield had fallen prey to another human impulse: he’d bragged about money to a mate, in this case a teammate, who duly reported it to the coach and captain. Some six months later, the club finally contacted the ECB.

When the case came to court in 2012, Essex’s Pakistani overseas star Danish Kaneria was named as the man who ‘turned’ Westfield, and Kaneria was subsequently banned for life by the ECB. (Only in 2018 did Kaneria finally admit his guilt.) Westfield, meanwhile, did four months of “hell” in Belmarsh, now plays club cricket in Essex, and works alongside the PCA educating young cricketers. 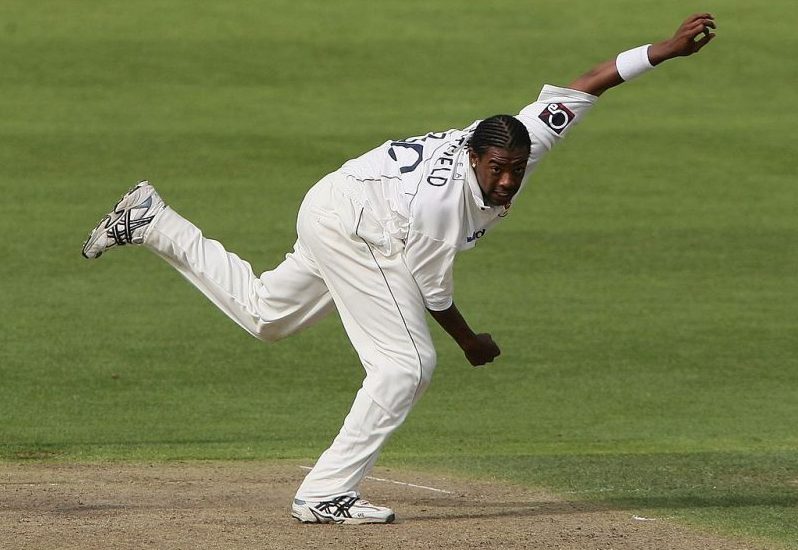 “He was a young, naïve young player who got manipulated, groomed if you like, and it’s desperately sad”

“Having worked with Mervyn,” says Ian Thomas, “I just hope we never have another case like that, because he was a young, naïve young player who got manipulated, groomed if you like, and it’s desperately sad. It told us how vulnerable cricket really was. Good old English cricket… and people preyed on it, and then we learned. I’m confident that we won’t see that kind of story happen again.” Has Thomas received any approaches from concerned English players in, say, the last six months? “No. None at all.”

“These days it’s pretty black and white,” says Daryl Mitchell, Worcestershire stalwart and PCA chairman. “Just make sure anything suspicious is reported. I’ve had a couple of messages on Facebook from people I don’t know asking about conditions and team selection, who’s fit and who’s not. I’ve just taken a screenshot, sent it to the ECB and it’s dealt with. I think it’s happened twice. You can’t be too careful. Education around it is very good now and the things that the PCA have put in place, like the rookie camp for those first-year professionals, it’s brought up at those.”

The Westfield case, thankfully still an isolated one, was English cricket’s pitiful submission to a vast global story, the scale and depth of which has only recently been recognised. “The job will never be done,” Marshall says. “But we can successfully disrupt and suppress. That’s what we can do.”