Issue 19 of Wisden Cricket Monthly includes a special feature on the finest cricket books ever written, the results of which will also be revealed on wisden.com over the next week. WCM reviews editor Jon Hotten explains how the judging process worked.

In March 1706, William Goldwin, a new master at Bristol Grammar School and recent graduate from Cambridge, published a slender volume of his early verse called Musea Juveniles. Inside was the poem that would lend him a strange kind of immortality, 95 lines in Latin that he titled, ‘In Certamen Pilae – ‘on a match at ball’.

It was the first piece of cricket literature, invaluable to historians in its descriptions of the ‘smooth expanse’ of meadow that the players stumble upon, the leather ball and curved bats, and the scorer notching the total on a stick, but priceless too for the way in which it used the humour of recognition among players (those that read Latin, at least). 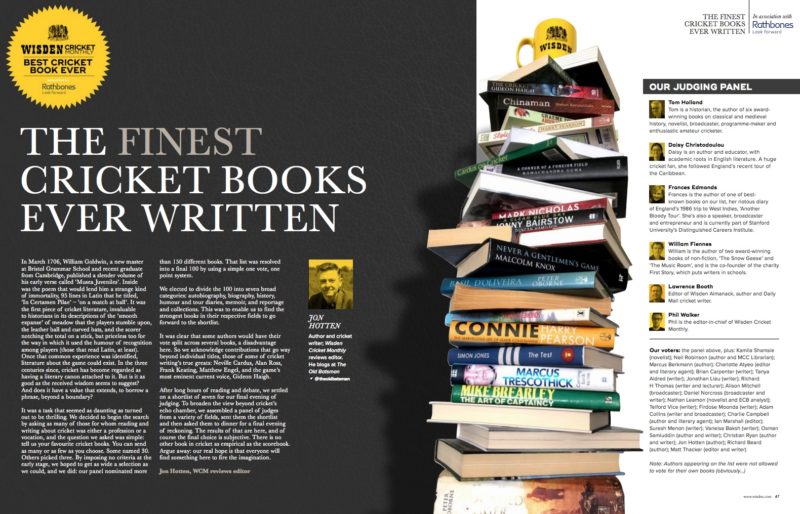 Once that common experience was identified, literature about the game could exist. In the three centuries since, cricket has become regarded as having a literary canon attached to it. But is it as good as the received wisdom seems to suggest? And does it have a value that extends, to borrow a phrase, beyond a boundary?

It was a task that seemed as daunting as turned out to be thrilling. We decided to begin the search by asking as many of those for whom reading and writing about cricket was either a profession or a vocation, and the question we asked was simple: tell us your favourite cricket books. You can send as many or as few as you choose. Some named 30. Others picked three. By imposing no criteria at the early stage, we hoped to get as wide a selection as we could, and we did: our panel nominated more than 150 different books. That list was resolved into a final 100 by using a simple one vote, one point system.

We elected to divide the 100 into seven broad categories: autobiography, biography, history, humour and tour diaries, memoir, fiction, and reportage and collections. This was to enable us to find the strongest books in their respective fields to go forward to the shortlist.

It was clear that some authors would have their vote split across several books, a disadvantage here. So we acknowledge contributions that go way beyond individual titles, those of some of cricket writing’s true greats: Neville Cardus, Alan Ross, Frank Keating, Matthew Engel, and the game’s most eminent current voice, Gideon Haigh.

After long hours of reading and debate, we settled on a shortlist of seven for our final evening of judging. To broaden the view beyond cricket’s echo chamber, we assembled a panel of judges from a variety of fields, sent them the shortlist and then asked them to dinner for a final evening of reckoning. The results of that are here, and of course the final choice is subjective. There is no other book in cricket as empirical as the scorebook. Argue away: our real hope is that everyone will find something here to fire the imagination.

Tom is a historian, the author of six award-winning books on classical and medieval history, novelist, broadcaster, programme-maker and enthusiastic amateur cricketer.

Daisy is an author and educator, with academic roots in English literature. A huge cricket fan, she followed England’s recent tour of the Caribbean.

Frances is the author of one of best-known books on our list, her riotous diary of England’s 1986 trip to West Indies, Another Bloody Tour. She’s also a speaker, broadcaster and entrepreneur and is currently part of Stanford University’s Distinguished Careers Institute.

William is the author of two award-winning books of non-fiction, The Snow Geese and The Music Room, and is the co-founder of the charity First Story, which puts writers in schools.

Lawrence is editor of the Wisden Almanack, author and Daily Mail cricket writer.

Phil is the editor-in-chief of Wisden Cricket Monthly.