After returning from a ban which left his reputation in tatters, and only a couple of months on from having his technique torn to pieces by Stuart Broad, the most indestructible cricketer on the planet rose again with a Test triple-century. Adam Collins reflects on the latest chapter in the unmissable David Warner story.

Australia has a fickle relationship with the pop-cultural phenomenon known as ‘cancel culture’. On face value, we’re enthusiastically in favour of calling out poor behaviour and ‘cancelling’ those who have badly overstepped. In practice, it doesn’t last for long – especially if you’re an elite sportsman. Our football codes prove you can get away with pretty much anything so long as you play well on the weekend. But David Warner, in his customary ‘all-in’ manner, gave it a red-hot go at Newlands in March 2018. Nobody lost more paint than the opener, thrown as directly under the bus as was possible by administrators.

But at the end of 2019 it will be Warner on the commentary team at the start of the family-friendly Big Bash season. Nothing better symbolises his resurrection: those with money want a piece of him again. The aforementioned threshold for forgiveness might be low but, even so, this has been a swift about-turn. He didn’t feature in Cricket Australia’s generic branding ahead of this summer. A month on, he’s the frontman. 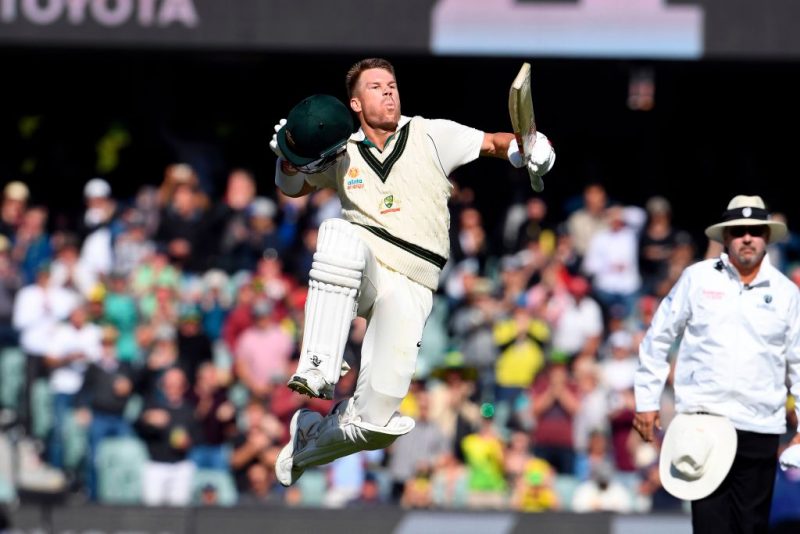 How? Bulk runs. The great panacea for any batsman. Warner’s confidence never waned as one Stuart Broad dismissal followed another, and against Pakistan, on home decks that have always treated him well, he went where even Bradman didn’t with an unbeaten 335 in Adelaide. It was an innings entirely different to his earliest exploits in national colours, where the crowd at cow corner were forever ducking for cover. This was calculated accumulation at its best, running the opposition into the turf, never satisfied. At the age of 33, the finished product.

But suspicion from some quarters remained close to the surface. When Warner was rumbled in Cape Town, the loudest voices calling for him to be banned for life, and so on, belonged to the great many Australians with an interest in the game without living it day-to-day. Many of the same cohort were filthy that he had the temerity to pass Bradman’s 334, seemingly oblivious to the fact that captains, not batsmen, dictate the time of a team’s declaration.

He didn’t feature in Cricket Australia’s generic branding ahead of this summer. A month on, he’s the frontman

But those a bit closer to the Warner flame remember how he was asked to behave on the field earlier in his career. Granted, he didn’t need a lot of encouragement, but he was, at some level, doing what he was told: to be an utter pest. To snarl in a way that Australian fans say they wish their team wouldn’t but are conditioned to accepting and are complicit in embracing.

We also saw the other side of what happened in South Africa, namely the misogynistic attacks that followed Warner’s wife around the country on that spiteful tour, the most disgraceful of which came the day before the scandal. A year earlier, in the forerunner to this magazine, he told me that his relationship with Candice was at the crux of every bit of self-improvement he had embarked upon since they met. An attack on her was an attack on him.

That is not to excuse what went down, but it bears repeating to understand how things got so badly out of hand. Laughable as his words seemed in the fall-out after Newlands, it also didn’t invalidate what Warner said in that interview about what he wanted his legacy to be. “I want to be the person who anyone can come to,” he said. “You want to have more friends than enemies. Where I have come in the last 12-18 months, I have been able to actually speak to people and change their opinions and be a nicer person and show them what I really am.”

As Australia endured their annus horribilis in 2018, these comments – and others like it, such as having an interest in public office to help the Indigenous community from where he grew up – jarred. Not only to those dipping in and out of the national sport, but to those who couldn’t look past firmly-held beliefs that he was too rotten to recover. Unable to score runs while suspended, his utility was nil. But by showing the discipline to keep his mouth shut while the other banned players equivocated in front of the cameras, it showed that he wanted to do this again.

And here we are, a record-breaking series later. Given his exceptional record on home soil, the lazy tag of flat-track bully will likely stick with him. Does he care? If so, he isn’t letting it break through a cheery disposition and a broader charm offensive. Does it hurt that for some fans the hate will never subside? For that, and probably a whole lot more, we’ll have to wait for his post-career book. It might turn out that his chapters on 2019 are even more instructive than those on 2018.

For now, the most complicated player of his generation will continue apace. Barring anything unforeseen, he won’t be cancelled. Admirers and loathers alike will continue to watch on with fascination, intrigued to find out how this story ends.