Jos Buttler takes the cover of our final issue of 2018 – out on December 20 – as we reveal Wisden Cricket Monthly‘s inaugural teams of the year.

With the help of an expert panel of writers and broadcasters, we’ve selected four teams – men’s Test, ODI and T20, and a women’s cross-format XI – and profiled the standout performers.

We also have an exclusive with West Indies captain Jason Holder, who talks candidly about the toughest job in cricket, a feature on the curiosities of being an English spinner featuring an interview with Jack Leach, and a quiz of the year with some fantastic prizes up for grabs.

The magazine also showcases some brand-new features, including our take on the Guardian‘s ‘Secret Footballer’ series as a trophy-winning county cricketer reports from deep inside the dressing room. 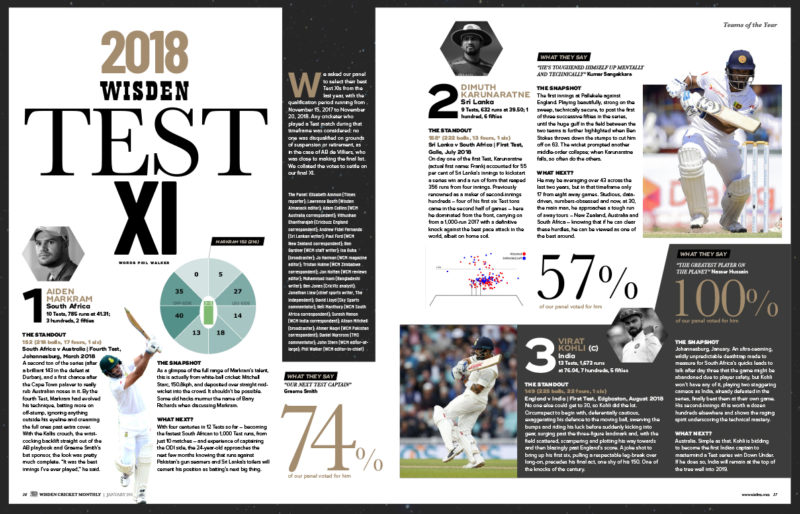 “Don’t get me wrong, we are pros and we’ll play topless with nipple tassels and flashing footwear if we are paid enough. But we don’t want to be lied to or pushed around with no idea what is actually going on.”
In new series ‘Deep Cover’, our undercover county cricketer voices his frustrations about the Hundred

“The story of England’s four great all-rounders is partly a saga of yeoman triumph over establishment orthodoxy. Yet in this quartet can be traced a different story, too: the dimming of English cricket’s light bulb, the waning of its resonance, its retreat into the national margins. The 150-year journey from Grace to Stokes is also a tale of decline.”
Jonathan Liew argues that while Ben Stokes has the potential to follow in the footsteps of Grace, Botham and Flintoff, he’ll never be a national sporting icon

“I want to get to a situation where, when we cross the line, I’m not looking over my shoulder to make sure people are doing what they’re supposed to be doing, fielding where they should be, doing what they need to be doing, and every man knows the ins and outs of their team and their teammates. As opposed to me having to always do it. I’ve got enough to worry about.”
Jason Holder, the Windies’ accidental saviour, speaks to Phil Walker 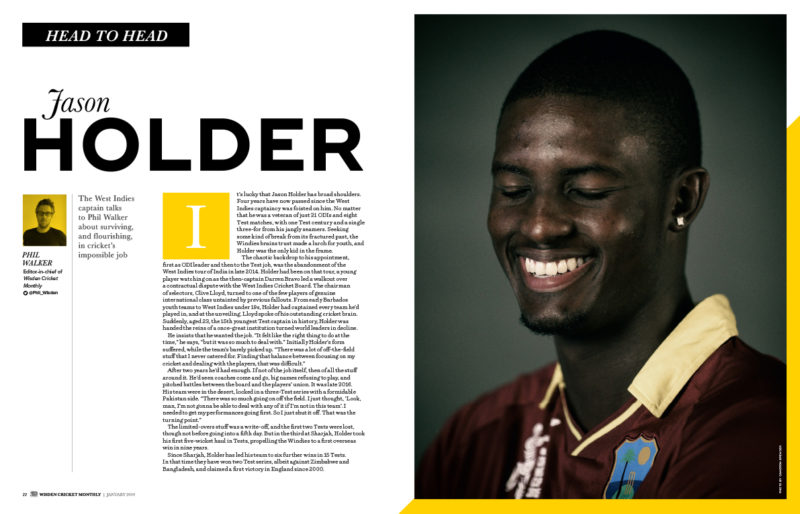 “Whether it’s 50 or 20 overs, if you’re going to call it a World Cup you need a good mix of countries playing competitively against each other, and in order for that to happen there needs to be some serious discussion about how we can assist countries such as Ireland, Bangladesh, Pakistan and Sri Lanka so they can keep up with the likes of Australia, England and India.”
Columnist Mel Jones gives her appraisal of the Women’s World T20

“Kaur is a big-match player. Nerves, anger, adversity, responsibility and the sense of occasion drive her. She played the World T20 like it was personal.”
Karunya Keshav on India’s T20 captain Harmanpreet Kaur, selected in our Women’s Team of the Year 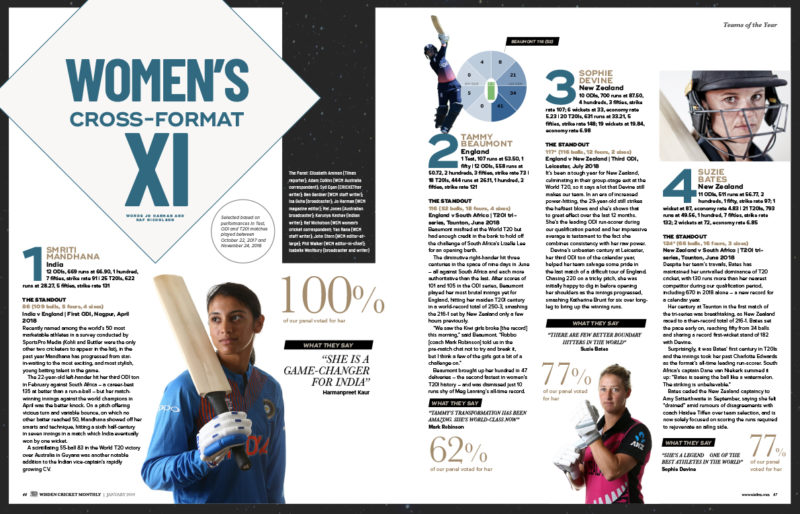 “What we are doing in cricket in this country is still quite embryonic in terms of infrastructure if you compare us to football, but there are some areas of our identification and selection processes that I think are well ahead of other sports.”
Mo Babat, a former PE teacher who is now at the heart of the ECB’s talent identification system, speaks to Elizabeth Ammon

“When I was young, everyone just used to say be the best spinner you can be and that’ll take care of itself, you’ll get picked, you’ll progress if you’re the best spinner. But as the years went on, and I’d be knocking on the door and taking wickets in the second XI, it was all about ‘the balance of the side’. You need to be more of an all-rounder.”
Ravi Patel, recently released by Middlesex, speaks to WCM as part of a feature on the challenges of bowling spin in England 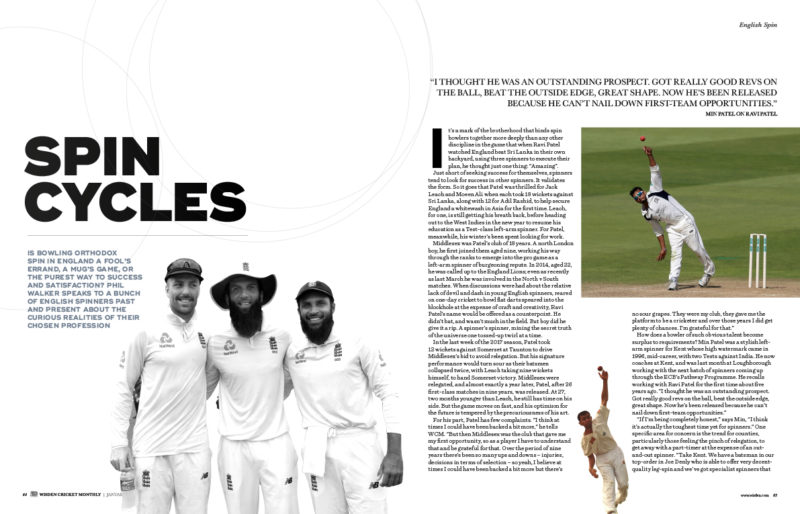 “One of my mates came out of the bedroom in his pants and just saw Steve Waugh, the captain of Australia at the time, standing in front of him. It must have been quite surreal.”
Rob Key on his life in the game

“The refreshments? Cold Carib or Stag beer, with various rum concoctions for those of iron constitution (Garner). Coconut water straight from the shell to rehydrate. A bag of top grade Westmoreland sensimilla for those partial.”
In the first of a new series, Derek Pringle imagines his perfect day at the cricket 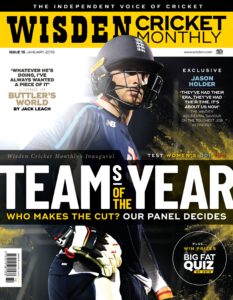