In the latest issue of Wisden Cricket Monthly, out March 21, we speak to fast-bowling sensation Jofra Archer, who recently became eligible to play for England and is now firmly in contention for the World Cup and Ashes this summer.

In an exclusive interview, the Barbados-born all-rounder talks in-depth about his decision to switch his allegiance to England, how he developed into one of the fastest bowlers in the world and where he sees himself fitting into the Test team, should the call-up come.

We also explore why England continue to struggle to produce express fast bowlers, speaking to top-level coaches and Zak Chappell of Nottinghamshire, one of the country’s most promising young quicks.

Elsewhere in the magazine we preview the new season by assessing how each of the 18 counties are shaping up, take a closer look at Lancashire, Glamorgan and Warwickshire, and pick out seven up-and-coming stars who you may not have heard of but likely soon will. Also in that section, editor-in-chief Phil Walker tackles the thorny issue of The Hundred, asking ‘How did it come to this?’.

Also in a jam-packed issue, Charlotte Edwards reflects on her singularly dedicated career, Jonathan Liew explains why cricket will never be cool, Mel Jones sets out her vision for the future of the women’s game and we have part two of our equipment showcase, presenting the best new gear for 2019.

“I only did it so I could play for Sussex as a local. I was a young boy. I knew I’d stand more of a chance playing county cricket as a local than an overseas. I never knew things would have turned out the way they have so quickly.”
Jofra Archer speaks to Jo Harman about his decision to pursue a career in England and his rapid progress since 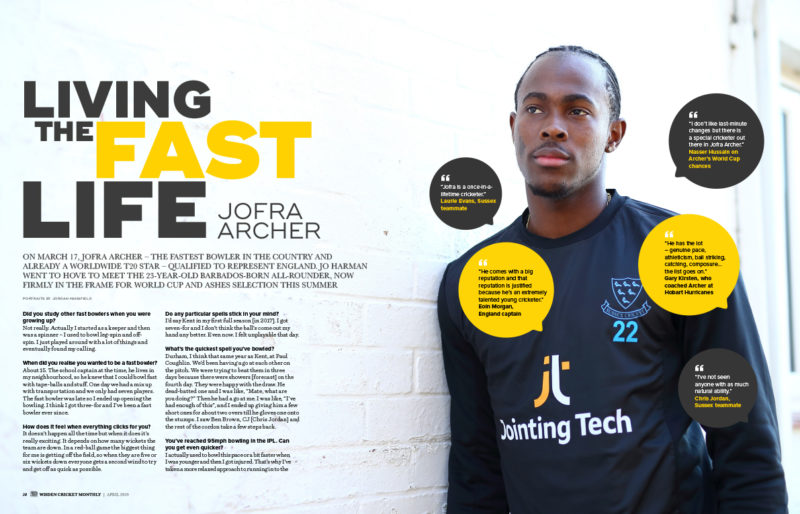 “We play a lot of cricket. If you’re bowling high 80s, 90 miles an hour, you can’t do that all season. It’s almost impossible.”
Zak Chappell, the 22-year-old England Lions and Notts fast bowler, on why he thinks we struggle to produce express quicks in this country 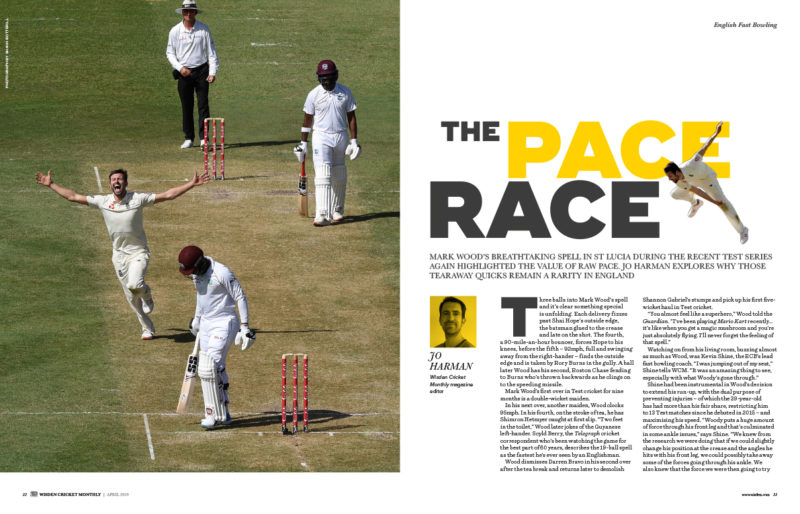 “With maybe a short and thrilling interlude in 2005 – lasting exactly the length of a camera shot of Kirsten Dunst and Razorlight’s Johnny Borrell at the Lord’s Test – cricket hasn’t been cool for as long as most of us have been alive.”
Jonathan Liew on why cricket will never be cool, and why that’s probably OK

“I’ll never forget our coach trying to keep a straight face as the hotel manager, in broken English, explained how a large porcelain elephant ended up in a lift, with CCTV of the player sliding it across the lobby.”
Our undercover county cricketer lifts the lid on pre-season tours

“Qualifying for a global event should be about the best teams getting there and for me the ratio is about right. Where we want to globalise the game is the T20 competition. We’ve given T20 international status to all member countries and that’s where we maybe need to increase the number of teams in our pinnacle event. So you’ll see that go from 16 to 18 to 20 in the not too distant future.”
Dave Richardson, the ICC’s outgoing chief executive, gives his justification for the 10-team World Cup 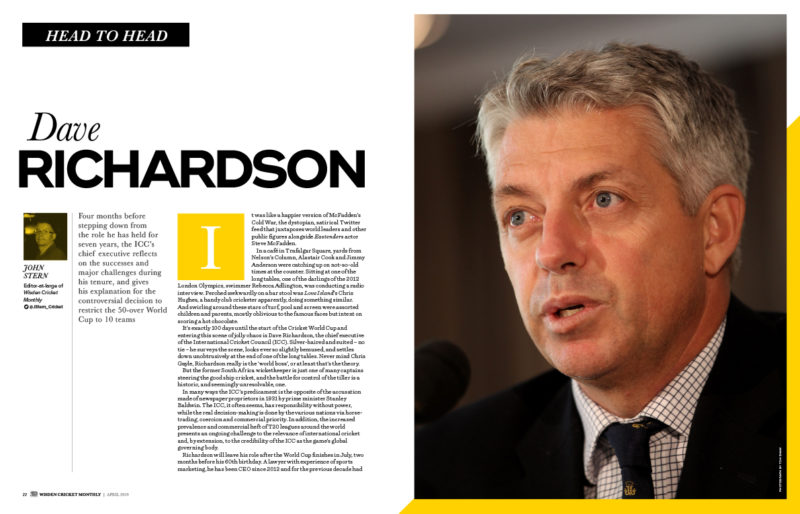 “T20 will give you marketing, profile and some fantastic TV but for the strength of the game as a whole we still need to be playing more 50-over cricket. Too much focus on T20 is going to be detrimental to the development of players’ skillsets.”
What next for women’s cricket? Our columnist Mel Jones identifies some key areas that need attention

“I sort of laid down the law which I don’t think went down as well as it could’ve. I was a novice to it all, I’d only done a little bit of captaincy before and I hated it.”
Jeetan Patel opens up on the difficulties he faced when he first became Warwickshire skipper, as part of a 20-page county special previewing the new season 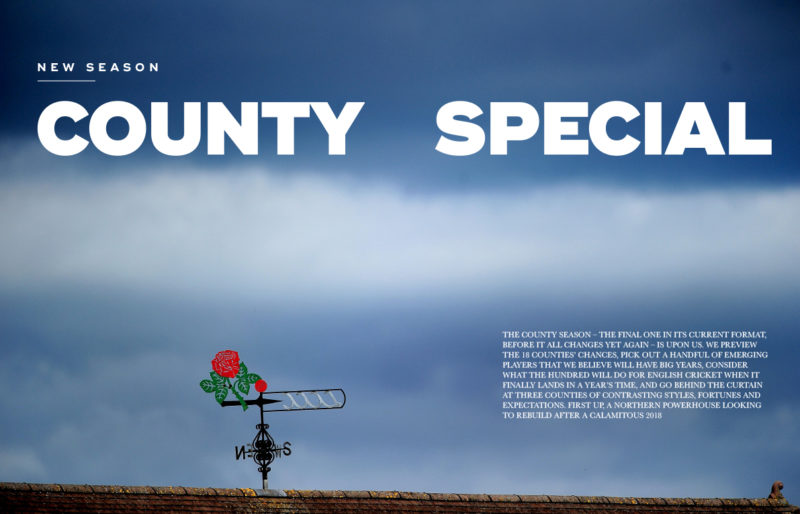 “Whether any meaningful passions can be generated in those crucial early moments for these strange-looking entities, as fans squint to identify with the red one, the blue one, the one from the north-east or the one from the south-west, requires at this stage a hefty leap of faith. And the public are not in the mood for jumping. At any rate, not yet.”
Phil Walker on The Hundred

“That was incredibly hard for us both. Clare [Connor] told me that it was the hardest thing she has had to do because we’ve been through quite a lot together. There will always be a strong bond between us. Our lives have been intertwined.”
Charlotte Edwards reflects on the end of her international career in ‘A Cricket Life’

“I’d want my TMS colleague Simon Mann to be there. He is a die-hard Gloucestershire fan who made my life hell after we both worked on the 2015 One-Day Cup final at Lord’s. I want my revenge. Watching Simon crushed beneath Surrey’s juggernaut will make me almost impossibly happy.”
Test Match Special commentator Daniel Norcross imagines his perfect day at the cricket 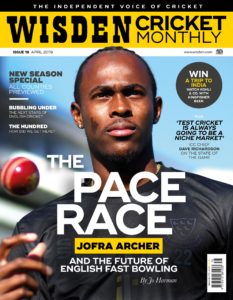