The latest issue of Wisden Cricket Monthly, out May 23, is the ultimate World Cup special and includes an exclusive interview with England captain Eoin Morgan.

Our bumper tournament preview also includes analysis of each of the 10 countries involved, predictions from our team of writers across the world, Andrew Strauss on plotting England’s course from World Cup embarrassments to runaway favourites, and an interview with New Zealand’s reluctant icon Kane Williamson.

We also tell the inside story of England’s miserable 1999 World Cup campaign and take you back to 1975 and the final to end all finals.

“I don’t believe it’s possible to eliminate all doubt. But with experience you recognise certain circumstances where you’ve experienced it before. It’s still hard work. And part of having that bit of self-doubt is the drive to always get better.”
England captain Eoin Morgan speaks to Phil Walker 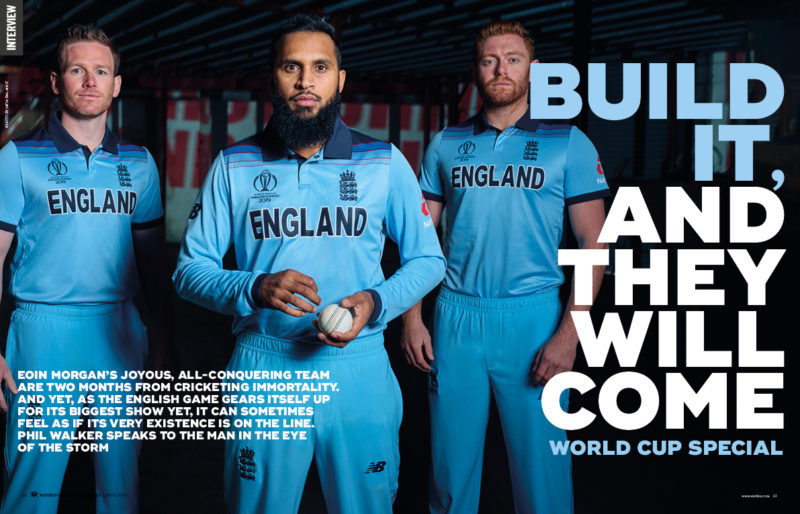 “I know him reasonably well. I’ve played with and against him. And it’s just baffling how stupid he’s been. How many chances he’s had. It annoyed me when his management company had a go at the ECB. Are you really that blinkered that you think you’re on a pedestal and should be given no end of opportunities?”
Our secret cricketer gives his thoughts on Alex Hales and the issue of drugs in the county game

“Nasser [Hussain] coming into the side stands out in my mind as being a mistake. He was a wonderful Test player and he brought the power of the England team back to the captain, which was a great thing, but he wasn’t a one-day player. He wasn’t in my top 50 one-day players in England.”
Adam Hollioake reflects on the mistakes made by England in the inside story of their miserable 1999 World Cup campaign 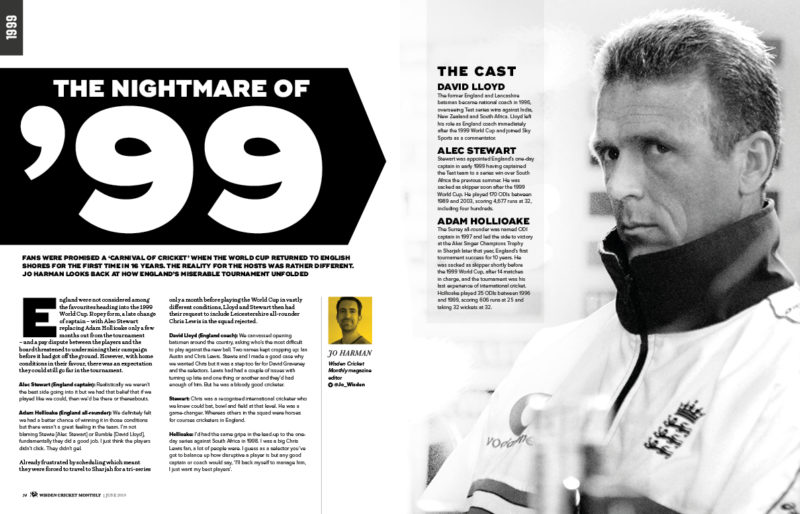 “In many ways the antithesis to The Hundred, perhaps the ‘downgraded’ 50-over cup can offer something to the more traditional fans of county cricket who are turned off by the new competition.”
Our returning county columnist Elizabeth Ammon on the future of English domestic one-day cricket

“At the other end Dickie Bird asked Lillee how many they had run. ‘You should be counting,’ was his understandable riposte. ‘But I make it about 17’.”
Richard Whitehead recounts the story of the first World Cup final, played between West Indies and Australia in 1975 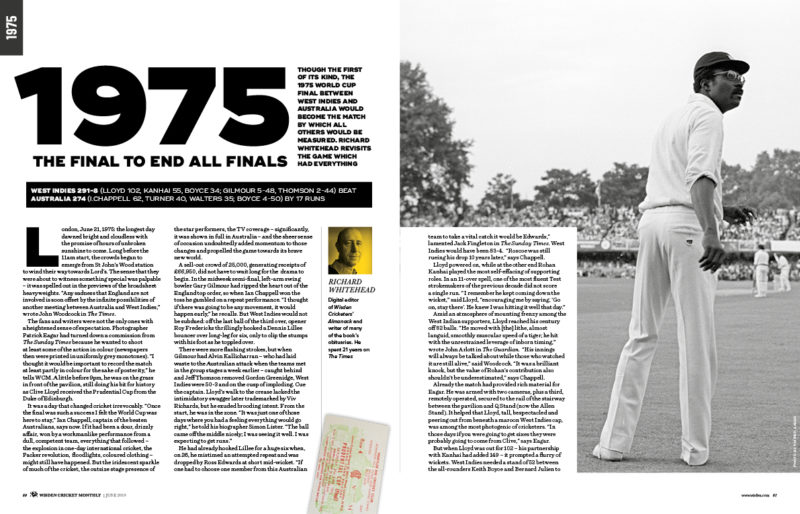 “In New Zealand you can walk down the street, pick up a cup of coffee and not have too many dramas. I guess in different countries there are different attitudes towards things. In New Zealand people are fairly laid-back in most things they do. It’s good, everybody just cracks on with it.”
Kane Williamson, New Zealand’s understated genius, talks to Jo Harman 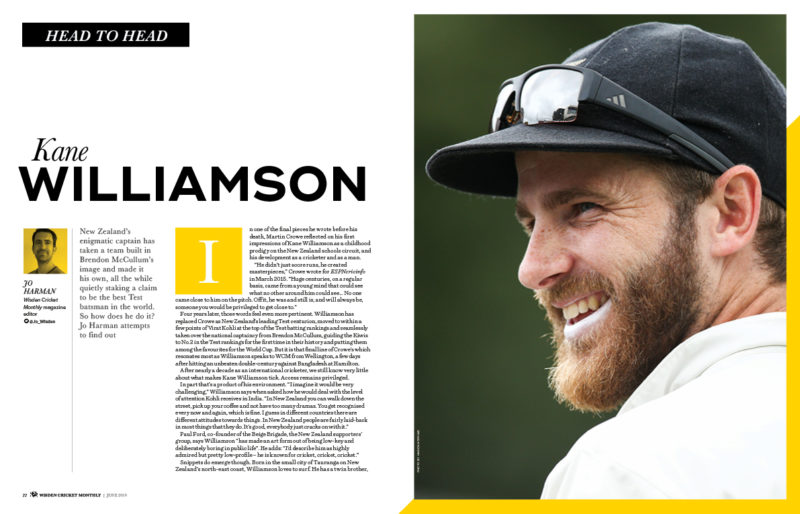 “The parable of Mendis serves as much as a warning as an inspiration. In a world where no mystery stays mysterious for long, young spinners face a constant challenge to innovate and develop.”
Jonathan Liew on the mysterious tale of Sri Lankan spinner Ajantha Mendis

“Becoming a Kolpak player was the best thing I’ve ever done. Duanne [Olivier] has absolutely made the right decision. I’ve never heard anyone say they regret it.”
Simon Harmer, the former South African spinner now playing for Essex, speaks to Daniel Gallan as part of a feature on the Kolpak conundrum 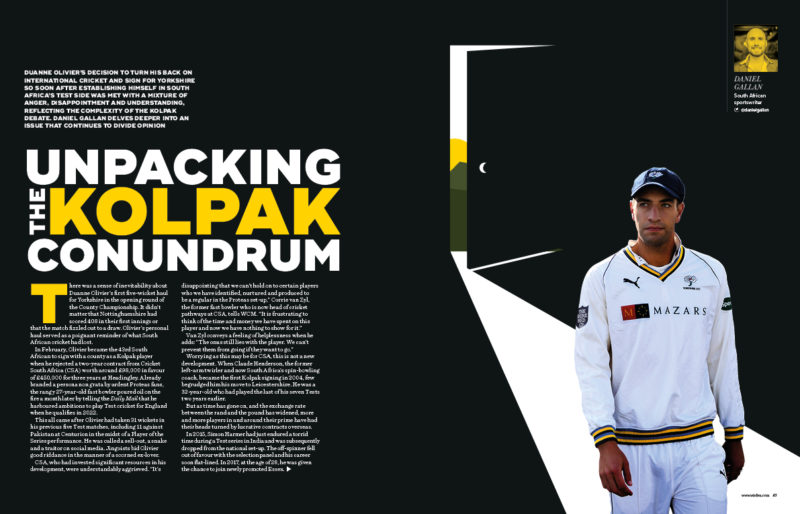 “Garry Sobers became my hero. I would need every page of this magazine to tell you properly about the magic in him. Let me boil it down to this: Sobers compelled you to look at him even when he did nothing but bury his hands in his pockets.”
Duncan Hamilton remembers the touring West Indians of 1973 in ‘My Golden Summer’

“I’m such a bad loser, whether I’m playing tiddlywinks with my two-and-a-half-year-old daughter or whatever, I hate it. I suppose age gives you better ways of dealing with defeats but I’m still not very good at it.”
Surrey spinner Gareth Batty on the defining moments of his life in the game 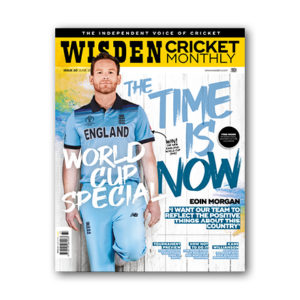