Jos Buttler takes the cover of the latest Wisden Cricket Monthly, out August 22, speaking exclusively to Phil Walker about England’s emotionally charged World Cup victory, the challenges of readjusting to normal life after that extraordinary high, and his determination to prove himself as a Test match batsman.

“I’m the best version of myself that I’ve ever been,” says Buttler. “I just want to enjoy that and try and be as good as I can be.”

Elsewhere we profile five heavyweights of the domestic game who continue to set the standard at their respective counties and beyond, Jonathan Liew considers whether it’s time for a reappraisal of cricket’s understanding of beauty as Steve Smith continues to set a new benchmark for modern batting, Zafar Ansari discusses the game’s obsession with numbers and the effect that has in the dressing room, and Peter Siddle, the great Ashes survivor, looks back on a decade of battles against England.

We also have an interview with Mark Ramprakash, who voices his concerns about a “dumbing down” of batsmanship, a Women’s Ashes post-mortem asking where Heather Knight’s side go next after a thumping at the hands of Australia, county columnist Elizabeth Ammon analyses what’s gone wrong at Nottinghamshire this season, and Marcus Trescothick picks out the highs and lows from his epic career.

The September issue of WCM also introduces a new series from Lawrence Booth, in which the Wisden Almanack editor picks out the game’s great trailblazers, beginning with the imperial, imperious Ranji.

“You want to live it again. That 30 seconds of pure joy and elation when you break the stumps, that’s what you play cricket for. But things move on really quickly and it’s about going again.”
Jos Buttler speaks to Phil Walker about recalibrating after England’s World Cup victory 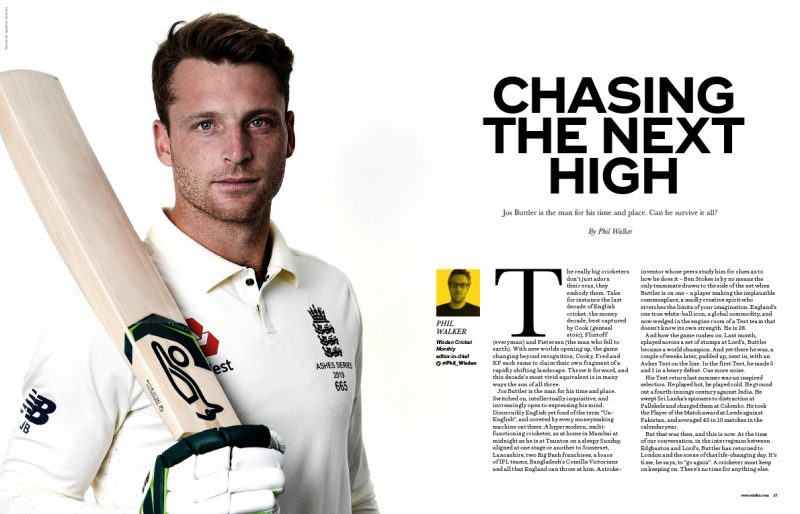 “Smith, a bottom-handed player who faces the bowler almost chest-on and would shovel his own grandmother through mid-wicket if she set him a 7-2 field, was always likely to fall foul of the style police: in many ways, the ultimate triumph of ugly function over beautiful form.”
Following Steve Smith’s brace of centuries in the first Ashes Test, Jonathan Liew considers whether ugly is the new beautiful

“As far as I’m concerned, I’m the best off-spinner in the world. If I didn’t believe that, then what am I doing? But how can I say that when I’m not competing against the best batters in the world?”
Essex spinner Simon Harmer is one of our five MVPs of county cricket 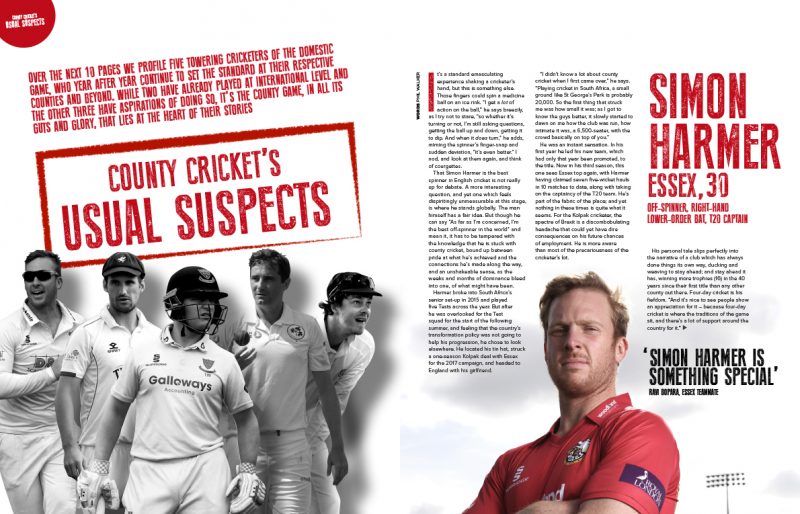 “At Cambridge, where Ranji was accepted to Trinity College as a “youth of position” after failing his entrance exam, he struggled for the approval of the university’s captain, Stanley Jackson, who would go on to lead England; years later, Jackson admitted he “lacked a sympathetic interest for Indians”, which was one way of putting it.”
Lawrence Booth highlights the influence of Ranji in the first of his new series

“While Mitchell [Johnson] was bowling fast and putting the pressure on them, KP was one player who we could exploit the opposite way. I was obviously the slower bowler out of the three of us and we set good fields, played on his ego a bit by giving him an opportunity to score against me, and it worked.”
Peter Siddle, on his fourth tour of England and playing his sixth Ashes series overall, speaks to Jo Harman about a decade of going toe-to-toe with the old enemy 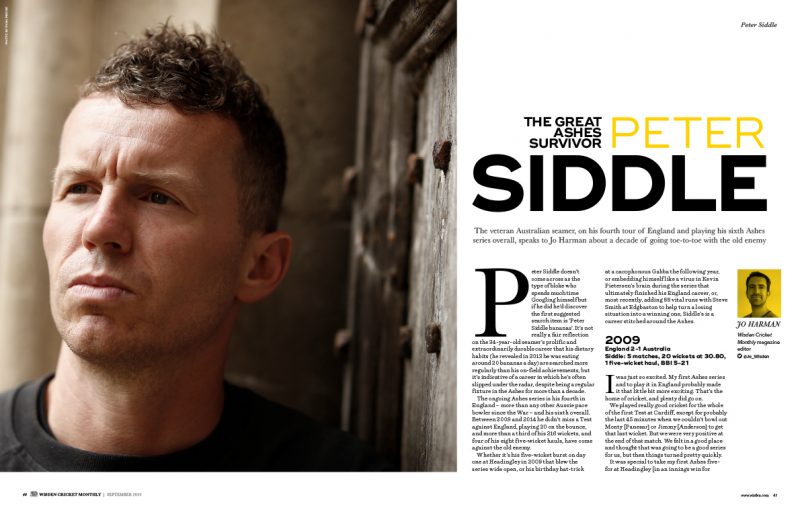 “Because of white-ball cricket, there’s a sense of ‘don’t overthink it’, ‘don’t hit too many balls’, ‘I want to feel relaxed in my mind’. To me that is a slight dumbing down of batting. The art of batting is thorough preparation, knowing the challenges the opposition will present, practising those and also practising your strengths.”
Ex-England batting coach Mark Ramprakash speaks to John Stern

“I almost dream of it now, while I’m still playing and it’s a lot harder now compared to when I was at my peak. It felt so good, to be in so much control, and you don’t realise at the time how nice a feeling it is. I look back on it now as my highlight and my best ever innings. I was in the zone, in that space in your mind, and it was absolutely perfect.”
Marcus Trescothick looks back on the highs and lows of his run-laden career 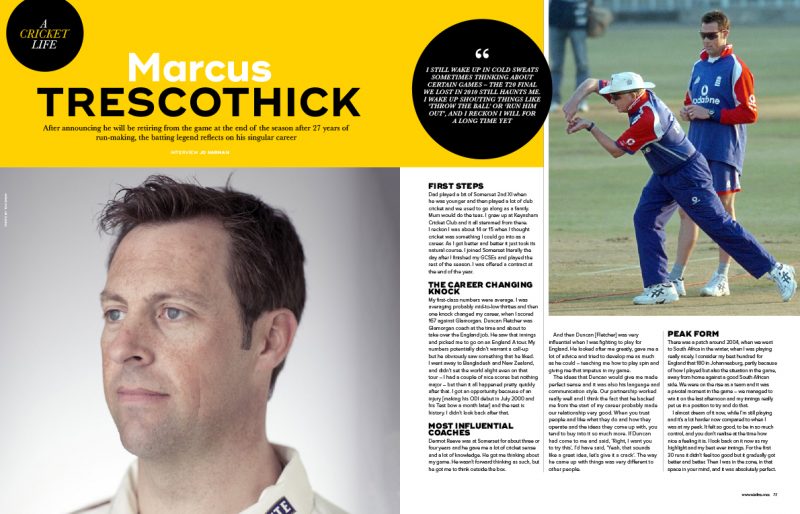 “It’s easy to lose sight of the psychological challenges that come with a profession in which you come to be defined as a collection of numbers constantly being gathered and recorded.”
Columnist Zafar Ansari considers how the power and proliferation of numbers can impact both on a player’s performance and their psychological wellbeing

“It’s not a job for the meek, the easily distracted, the troublemaker, the overly emotional: those that chose it must draw on a deep mine of mental strength. These arbiters of the game mustn’t be intimidated, they must trust their judgment, they must compartmentalise every mistake.”
Tanya Aldred takes us inside the minds of first-class umpires and explores the psychological pressures that come with the job 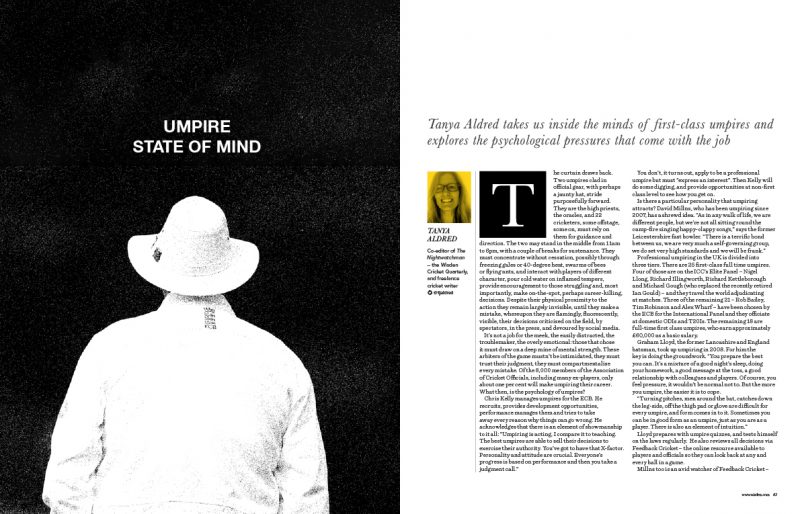 “My run-up is probably 90 per cent of my rhythm. I feel like if my run-up’s smooth and at the right pace, I don’t really have to worry about my action or accuracy, everything just seems to flow. That’s probably the biggest indicator of my form.”
Pat Cummins, the No.1 Test bowler in the world, shares his expertise on bowling fast in our coaching series 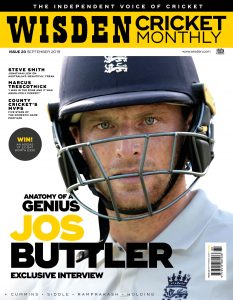