In the latest issue of Wisden Cricket Monthly – out February 27 – we trace the lineage of English batsmanship from the Golden Age to now, speaking to Graham Gooch, Geoffrey Boycott, Michael Atherton, Alec Stewart and Ollie Pope.

“Anyone can bat,” Gooch tells Jon Hotten. “But can you make any runs? That’s the question.” Across a 14-page feature we explore how England’s most prolific batsmen of their day have gone about their craft, from Ranji to Root and all points in between.

We also reveal the 19 most exciting teenage cricketers in the UK after canvassing opinion from coaches and players across the country. Included among our list of bright young things is an opening batsman hoping to become his county’s first England Test debutant since 2006, a 17-year-old intent on becoming the fastest women’s bowler this country has ever produced, and a Barbados-born all-rounder who’s got Surrey’s backroom staff very excited indeed.

Elsewhere we have exclusive interviews with former South African fast bowler Makhaya Ntini and Pakistan’s captain-turned-coach/selector, Misbah-ul-Haq, as well as part one of Wisden’s Gear of the Year, showcasing the best new kit on the market.

“Occasionally I didn’t feel great. You’re not going to feel perfect every day. I don’t like the word ‘zone’. That’s not a mental world you need to be in to score runs. It’s about you and the bowler and the conditions and the appetite to score big runs. That’s what I used to say to Alastair… never be satisfied.”
Graham Gooch, the most prolific run-scorer in the history of the game, talks to Jon Hotten as part of our cover feature on the lineage of great English batsmen 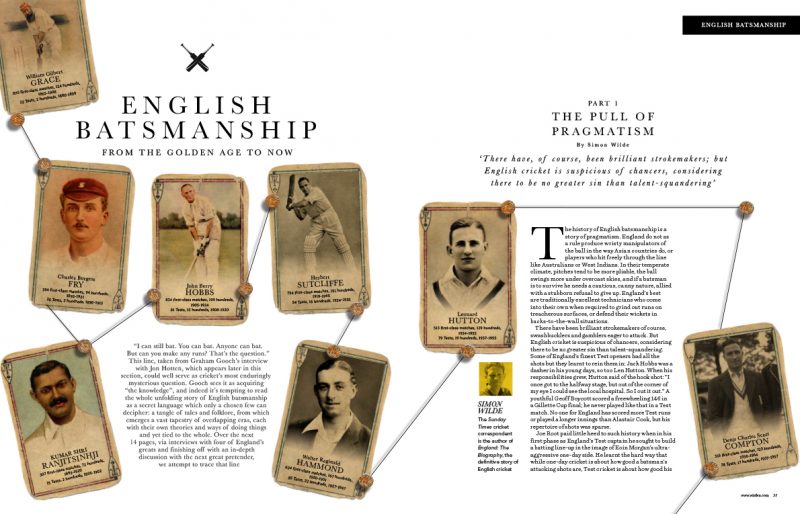 “I accept that my journey is something that other people with my skin colour look to. I was the first black African to play for South Africa so of course there are going to be people who look to me. But I don’t want to be remembered because of my skin. I want to be remembered as a bowler who earned his legacy.”
Makhaya Ntini reflects on his groundbreaking career

“I think I’m not the norm in the way I go about my cricket. A lot of players are more interested in white-ball cricket and playing in franchise leagues around the world and earning money. It’s not to say that I don’t want to do that, but for me my highest ambition is to play Test cricket for England.”
Gloucestershire and England under-19 batsman Ben Charlesworth is one of the 19 players selected in our list of the most exciting teenagers in the UK 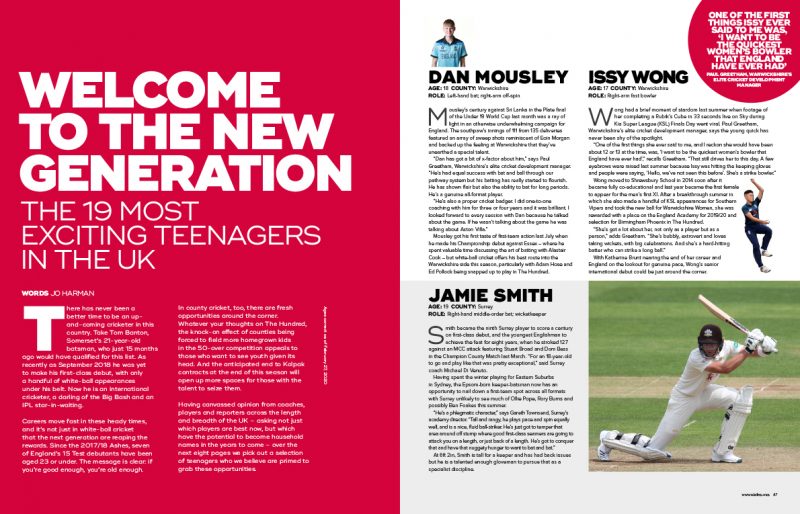 “Before the World Cup final in 2017 I was weighing up my options. I was in the England system at that point and it can feel really far away, getting from the academy into the England squad or working your way up from county level. But seeing that happen, it was just like, ‘Oh my god, that would be an amazing feeling’.”
Leg-spinner Sarah Glenn, a bolter in England’s T20 World Cup squad, on the moment which decided her future

“When [the PCB] shared that idea with me of taking both roles I was a bit worried. You have to face a lot of pressure and criticism. You cannot blame anyone else. You have to be held accountable. But at least you have all the power in your hands.”
Misbah-ul-Haq talks to Taha Hashim about his dual role as Pakistan’s head coach and chief selector 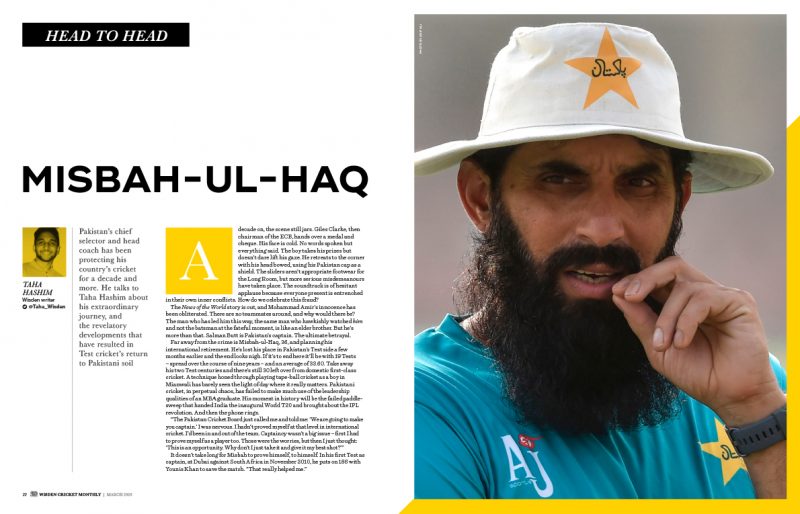 “Redemption needs remorse and demonstrable action. Kuggeleijn and New Zealand Cricket could have shown both without contradicting his defence. They might have used his case as a teaching opportunity, linking it to relevant programmes. Instead they handed him a uniform in silence.”
Geoff Lemon on why selecting Scott Kuggeleijn is a stain on New Zealand’s good-guy image

“I remember one season we played Hampshire in two Championship matches and the three one-day competitions: five matches, seven innings. Barry Richards, the great South African, batted against us seven times that year. His top score was 15 and Mike Hendrick got him out every time. That’s how good Hendo was.”
In the first of a new series, former national selector Geoff Miller picks Derbyshire’s Greatest XI, with the rest of the first-class counties to follow in the coming months 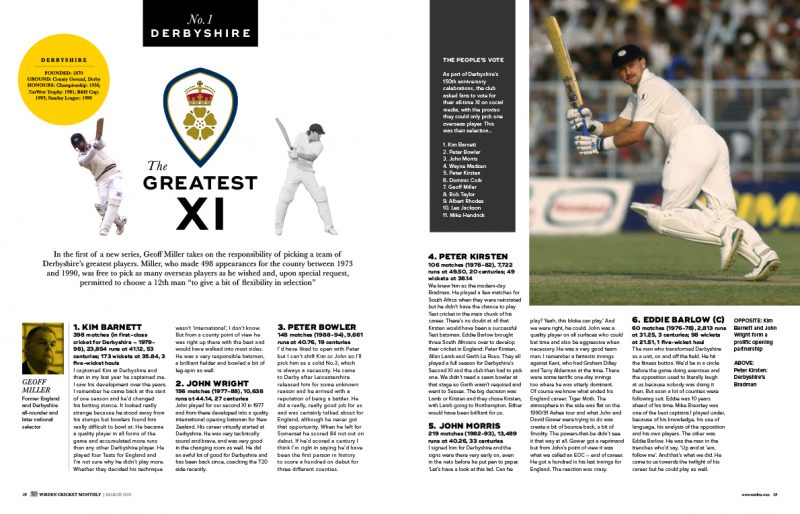 “The sense pervades that Buttler, the white-ball captain-in-waiting and England’s limited-overs GOAT, is simply too big to fail, given what he represents about the sport’s zeitgeist, its marketability, its ability to keep inspiring yet more generations.”
Columnist Andrew Miller considers the conundrum surrounding Jos Buttler’s place in England’s Test side

“Even at the 2019 Big Bash – my last tournament as a player – a young player who’s now in the Australian side came at me during a game saying, ‘What are you still doing here? Still chucking it are we?’ Those things always happened, but you can’t show others how it’s getting to you. Once you’ve been called, it never leaves you.”
Johan Botha, the retired South African spinner, opens up as part of James Alder’s feature examining what it’s like to be labelled a ‘chucker’ 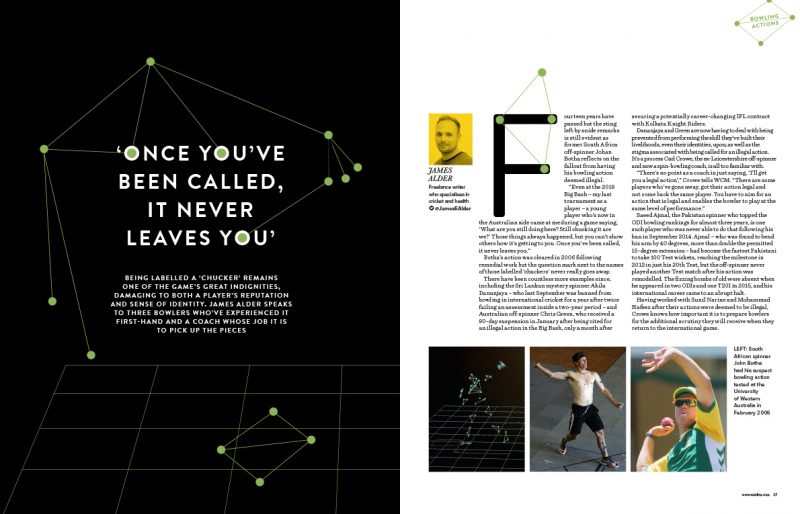 “The village green at Littlewick Green in Berkshire, back-end of Maidenhead. I grew up round there and I still go there, in disguise. It’s a beautiful little village and there’s one pub there, The Cricketers. I’ve sat there many a Saturday afternoon with a hat on, sunglasses, and just got pissed up and had a wonderful time, watching 22 cricketers having a lot of fun. Nobody has spotted me to this day, and this is going to blow me out the water.”
Umpire Ian Gould settles in at his favourite pub for his ‘Perfect Day at the Cricket’ 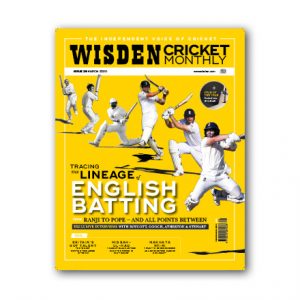