In the latest issue of Wisden Cricket Monthly – out March 26 – Phil Walker takes a trip to Mark Wood’s hometown to meet the England fast bowler who, in the words of his ex-bowling coach Kevin Shine, “is different to pretty much any fast bowler we’ve got or have had”.

Wood reflects on his singular career so far, including last summer’s World Cup win and an electrifying recent tour of South Africa, as he gives WCM’s editor-in-chief a guided tour of Ashington, a small town with extraordinary sporting heritage that was once the centre of the north-east’s coal-mining industry.

Elsewhere, columnist Andrew Miller considers what the game might look like when it re-emerges from its lockdown, Graham Thorpe talks to John Stern about how he learnt to enjoy cricket again, and Shahid Afridi picks out the defining moments from his hair-raising career. “My approach has always been to never fear failure,” the Pakistani all-rounder tells Saj Sadiq.

We also do our best to preview the new county season, even as its future hangs in the balance. Wisden Almanack editor Lawrence Booth celebrates Northants and Gloucestershire punching above their weight to kick off a section which also includes an interview with Essex’s new captain Tom Westley and Taha Hashim’s feature on where things have gone wrong for Middlesex since their 2016 County Championship triumph. Meanwhile, county columnist Elizabeth Ammon argues the end of Kolpaks will be to the benefit of English cricket as a whole.

There are also leg-spin secrets from Rashid Khan in our coaching section, Adam Collins’ reflections on the Women’s T20 World Cup, and Martin Tyler, Sky’s voice of football, recalls standing in as 12th man for Surrey and living with two Test captains.

“It’s amazing that a town of about 30,000 people has the two Charltons [Bobby and Jack], Harmy [Steve Harmison], and World Cup winners. For me, I think it’s that community spirit, the values that are instilled into you as a kid, that you’re kind to people, you look after people, but you have that hard work and dedication to look after one another.”
Mark Wood on why his hometown of Ashington, which was also the birthplace of Newcastle United FC legend Jackie Milburn, keeps churning out iconic sports stars 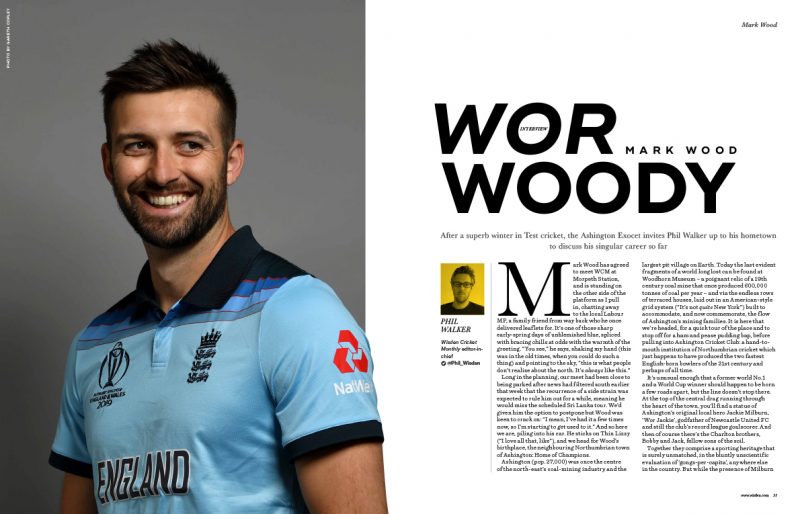 “As of this past fortnight, sport now belongs to nobody, and while it’s far too soon to make any bold predictions about cricket’s post-pandemic future, this globally-imposed pause for reflection may yet herald changes in attitude and engagement that we, quite literally, can only dream of right now.”
Columnist Andrew Miller writes that the outbreak of the coronavirus has put cricket’s numerous petty squabbles in perspective

“Cricket makes you smile less, but it makes you cry much more. Cricketing politics at times within the dressing room, poor performances, and when you are in a bad patch… that also made me feel very down. Then there were the captains who tried their hardest to get rid of me from the team. There were some very tough times during my career but I remained strong and I always had that self-belief.”
Shahid Afridi on the greatest hits and biggest disappointments from his thrill-a-minute career 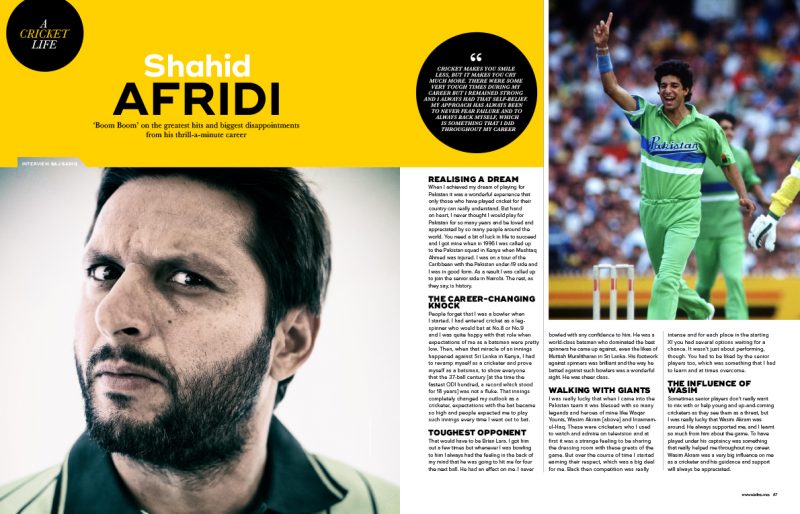 “I remember Ben coming to Durham from Cumbria as a 14-year-old and it was clear he was an outrageous talent with real physical prowess. He wasn’t the most consistent performer by any stretch but his competitiveness and drive to become what he is now – one of the best cricketers in the world – soon became apparent.”
Ben Stokes is a shoo-in as Geoff Cook, the godfather of Durham cricket, picks his county’s ‘Greatest XI’

“For the rest of the summer, at the start of every game, no matter where it was, there’d be an envelope waiting for me from Neil Foster with a photocopy of my bowling figures in it.”
Jonathan Agnew reflects on the ‘Year of the Bat’, the record-breaking, run-laden summer of 1990 in which he returned what were then the worst first-class figures in Leicestershire’s history 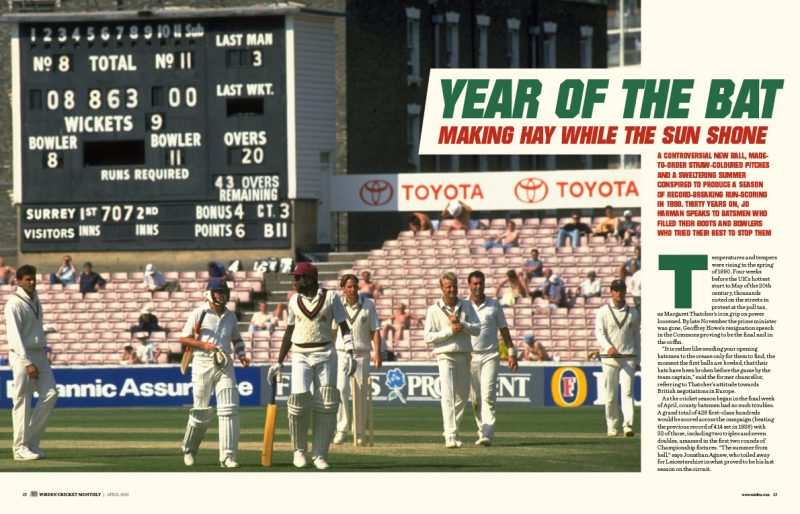 “I’d had a normal life until I was 46. I woke up after a Friday night out and…. f*****g bang. I’d had a pituitary tumour for 16-17 years. Apparently I should have been having migraines, wobbly vision – I’d never had anything. I thought: ‘Bloody hell, this is some hangover’. Then I felt my face and it was wet, blood coming out of the corners of my eyes. I thought I was broken.”
Pete Blueitt is one of three members of England’s visually impaired team who tell Steve Morgan their extraordinary stories

“People can get caught up with Chelmsford, and our facilities. But we are a big club. We’ve won Division One twice in three years. I don’t buy into that small-club mentality. It comes down to the quality of the cricketers you produce, not how big your changing room is.”
Essex’s new club captain Tim Westley speaks to Phil Walker as part of our county season preview 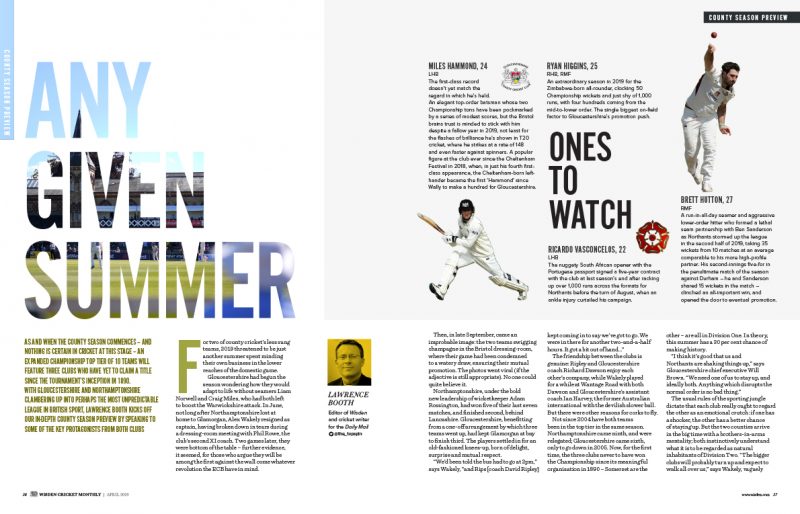 “If it turns out that the World Cup final is the last meaningful cricket played over the next six months or more, what a powerful memory it leaves. It will never get better than that for Meg Lanning’s charges. Just as significantly, the achievement was reward for leadership and investment over a sustained period. None of what happened at the MCG was in (dare I say it) isolation.”
Adam Collins on Australia’s fifth Women’s T20 World Cup title

“I was determined, a bit on the shy side. But you grow up and as you mature you understand the environment much better. You understand you’ve got to live, you’ve got to enjoy.”
Graham Thorpe on the ups and downs of his England career 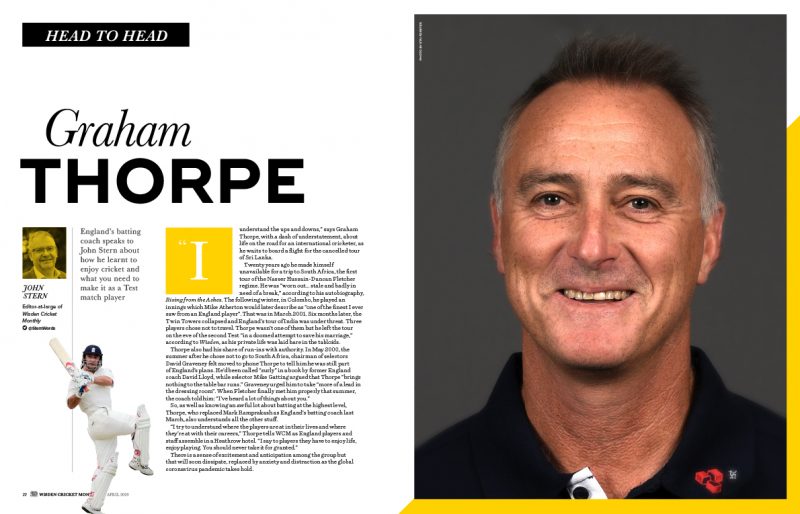 “I watched the first Test of the 1970/71 Ashes with Bob [Willis] on the BBC highlights and by the third Test I was still sitting in the same place and he’s on screen playing against Australia! It was an extraordinary thing to happen to my flatmate.”
Sky Sports football commentator Martin Tyler recalls flatting in Streatham with an England cricketing legend 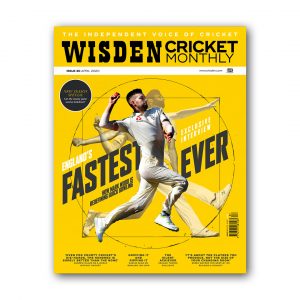