England’s record-breaking ODI opener Jason Roy takes the cover of issue 4 of Wisden Cricket Monthly, telling us that he is “ready for Test cricket”. The Surrey strokemaker is one of five exciting talents we pick out who can spark England’s Test team back to life after a miserable winter in Australia.

We also have an exclusive interview with Anya Shrubsole, as the World Cup-winning seamer relives that unforgettable day Lord’s and reflects on the the life-changing impact it has had.

Elsewhere, regular columnist Kumar Sangakkara explains what made his former teammate Murali so special, on and off the pitch; Luke Alfred tracks down Wally Hammond’s children to reveal the untold story of the batting legend’s melancholic later years in South Africa; Barry Richards looks back at the highs and lows of his extraordinary career; Tim Wigmore unravels the mysteries of the IPL auction; and John Stern meets Graeme Hick in Australia.

To round things off Felix White sits down with Geoffrey Boycott to discuss, among other things, the Yorkshireman’s sixth-sense, satnav voiceovers and Katy Perry’s Twitter following.

Here are 10 standout quotes from the new issue:

“I feel ready to play Test cricket. Mentally I’m in a good place right now. I might not be there numbers-wise in my first-class career… but you don’t actually know if you’re made to play Test cricket until you play.”
Jason Roy tells Phil Walker he’s not prepared to be pigeonholed as a white-ball batsman, and has designs on a Test place 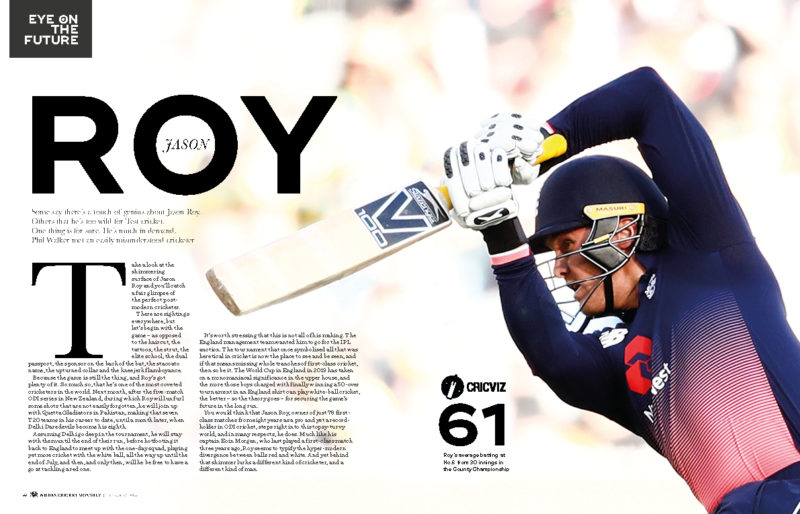 “He’s a left-armer, can swing the ball and bowls at 90mph. There aren’t many guys around who can do that.”
Jon Lewis, Sussex’s assistant head coach, explains why George Garton, the 20-year-old left-arm quick, has got people talking

“Every game for him was played as if it was his first. The nerves, anticipation, butterflies in the stomach; you could see his excitement to get the ball in his hand. Just before we’d field he’d sometimes go to the bathroom to throw up, he was that nervous, and that was after he’d taken 700 wickets. He had that much passion for the game.”
WCM columnist Kumar Sangakkara picks out his former teammate Muttiah Muralitharan as his second ‘Titan of Cricket’ 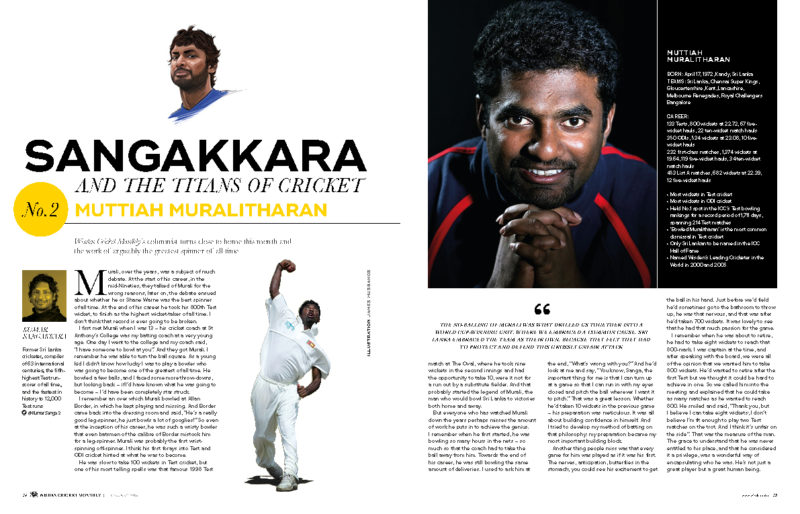 “The IPL has embraced a fundamental democratisation of the sport. The league doesn’t care about a player’s passport or history, only their ability to help win T20 matches.”
Tim Wigmore on how the IPL auction vulgarised – and democratised – today’s game

“I tried to tinker with a couple of things to do with my trigger movement halfway through my career and in hindsight I wish I hadn’t. I never really felt a hundred per cent comfortable in doing it. I did it because I felt other people were telling me to.”
Graeme Hick, the former England batsman and now Australia’s batting coach, speaks to John Stern about learning from his own mistakes when developing his coaching philosophy 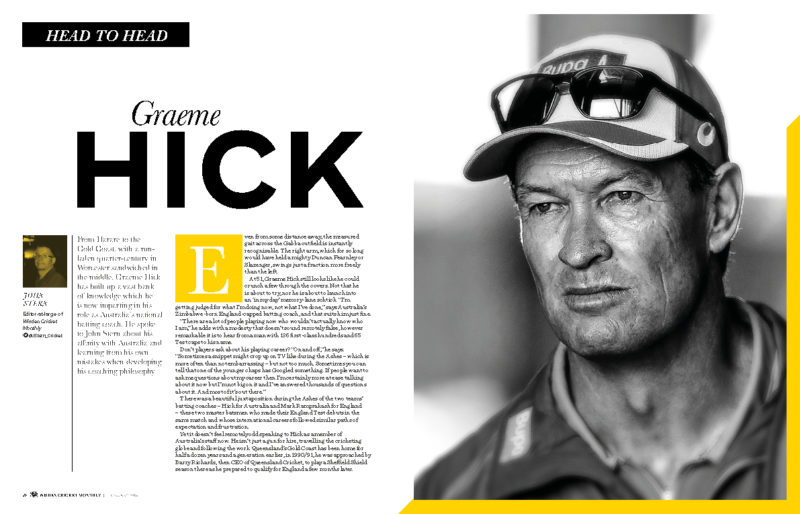 “I didn’t always do myself justice – I gave away my wicket on far too many occasions. I wasn’t playing Test cricket so at times I played to challenge myself.”
Barry Richards recalls the standout moments from his prolific career

“I have always thought of myself as a fairly normal person who just happens to play cricket. So in my head I thought it would all go back to normal. What became evident is that you return to a slightly different version of normal.”
In an exclusive interview, World Cup winner Anya Shrubsole reflects on her life-changing year 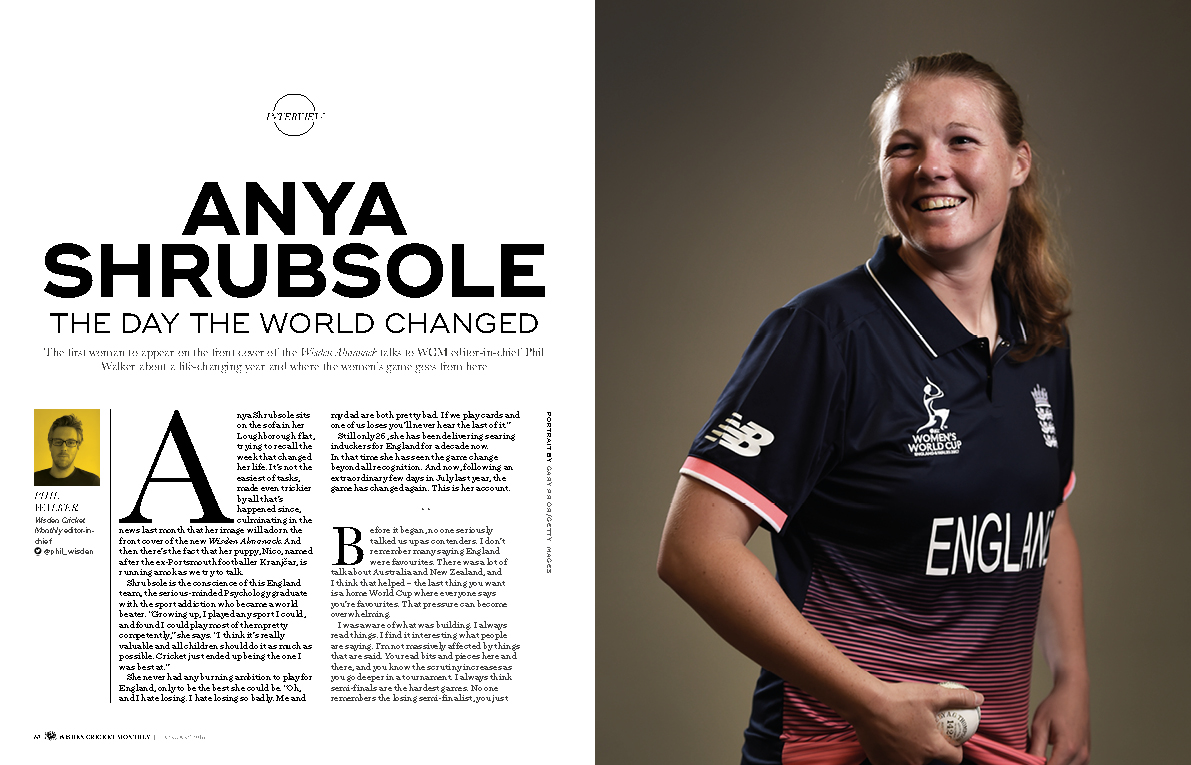 “Trevor Bayliss flagrantly disregarded the iron law of English one-day cricket: that in order to do remotely well at an international tournament, England must not, under any circumstances, be regarded as favourites.”
For Heaven’s sake, Trevor, don’t use the F-word, writes WCM columnist Jonathan Liew

“I remember walking into the ward with Mom and I did not recognise Dad. He had turned white overnight and had stitches from his forehead to the back of his head. Mom said his head had split like a melon.”
Valerie Guareschi, Wally Hammond’s youngest daughter, remembers the aftermath of a serious car crash involving her father, as we explore the untold story of the batting great’s later years in South Africa 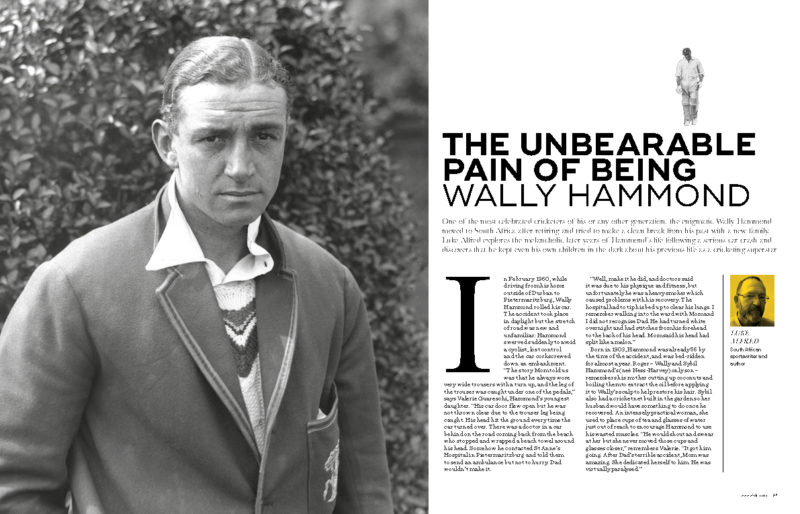 “I can see what’s going to happen. It’s a gift.”
The inimitable Geoffrey Boycott in conversation with Felix White 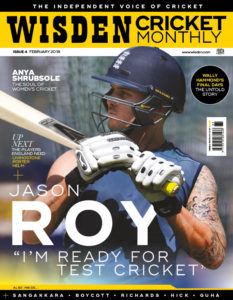