A controversial new ball, made-to-order straw-coloured-pitches and a sweltering summer conspired to produce a record-breaking year for the bat in 1990. Thirty years on, Jo Harman speaks to the batsmen who filled their boots and bowlers who tried their best to stop them.

Temperatures and tempers were rising in the spring of 1990. Four weeks before the UK’s hottest start to May of the 20th century, thousands rioted on the streets in protest at the poll tax, as Margaret Thatcher’s iron grip on power loosened. By late November the prime minister was gone, Geoffrey Howe’s resignation speech in the Commons proving to be the final nail in the coffin.

“It is rather like sending your opening batsmen to the crease only for them to find, the moment the first balls are bowled, that their bats have been broken before the game by the team captain,” said the former chancellor, referring to Thatcher’s attitude towards British negotiations in Europe. 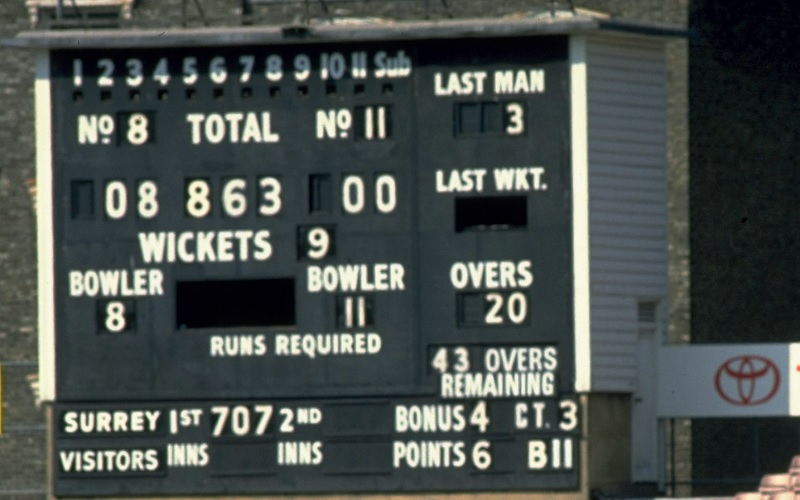 As many as 1,570 runs were scored across the first two innings in the 1990 County Championship fixture between Surrey and Lancashire at The Oval

As the cricket season began in the final week of April, county batsmen had no such troubles. A grand total of 428 first-class hundreds would be scored across the campaign (beating the previous record of 414 set in 1928) with 32 of those, including two triples and seven doubles, amassed in the first two rounds of Championship fixtures. “The summer from hell,” says Jonathan Agnew, who toiled away for Leicestershire in what proved to be his last season on the circuit.

The gradual shift towards four-day cricket – the Championship season had consisted of six four-day matches and 16 three-day matches since 1988, before switching to entirely four-day fixtures in 1993 – probably played its part, with groundsmen keen to ensure their pitches lasted the duration. However, Angus Fraser, the Middlesex and England seamer, remembers the previous summer’s Ashes series being the trigger for the run glut.

The modified ball was the biggest point of contention, provoking outrage from seamers across the land

Fraser had made his Test debut during that 4-0 defeat to Allan Border’s Australians; one of 12 seamers used by England as they tried in vain to stem the flow of runs from Steve Waugh, Mark Taylor and co. “England had a poor summer and of course it’s down to the fact that our bowlers haven’t been good enough, and that the seam on the ball is making county cricket too bowler-friendly,” says Fraser with the weariness of someone who’s become well accustomed to this line of argument over the years.

“So rather than changing one thing they changed two things and they didn’t know which one actually had the effect. The seam on the balls was reduced and groundsmen were directed to produce flatter, whiter pitches. The usual knee-jerk reaction to an Ashes defeat.”

The modified ball was the biggest point of contention, provoking outrage from seamers across the land. To make the pacemen work harder for their wickets the Test & County Cricket Board (the forerunner to the ECB) stipulated that balls should have only a nine-strand seam, compared to 15 the previous summer, while also reducing the height of the seam from 0.9mm to 0.7mm.

“It was almost like a hockey ball,” says Agnew. “It just had no seam, almost like a bit of cotton wrapped round it. And it did absolutely nothing. Nothing at all.”

In combination with the sun-baked, bright-white pitches, it led to some extraordinary totals, with seven counties passing 600, including two scores of 700 and Lancashire’s eye-watering 863 at The Oval in the first week of May. That Lancs innings, which came in reply to Surrey’s 707-9 declared, included 366 from Neil Fairbrother, and at one stage had the scoreboard operator scrambling to find a nail to hang an additional digit as the visitors threatened to bring up four figures.

“I remember turning to slip at one point and saying, ‘I don’t think I’ve actually touched the ball for 25 minutes’,” says David Ward, who kept wicket for Surrey in that match. “The pitch was flat.” 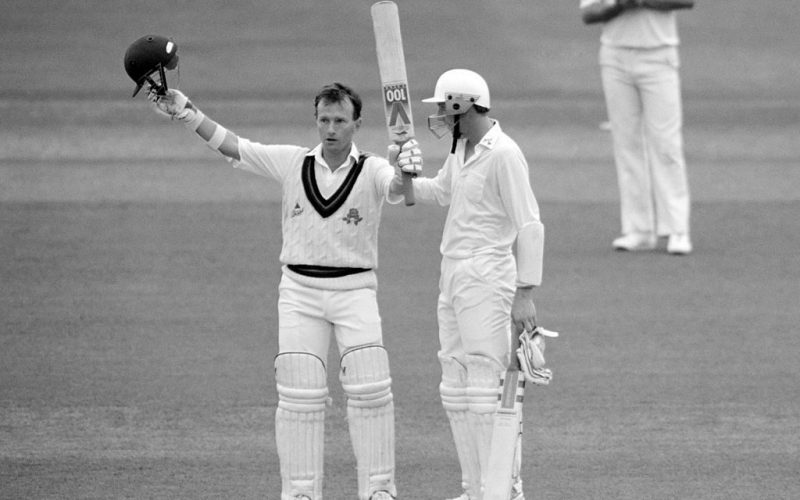 The same round of fixtures featured a triple century for South African opener Jimmy Cook as Somerset declared on 535-2 at Cardiff (his first of eight hundreds for the season), while Essex responded to Leicestershire’s 520 by piling on 761-6 declared at Chelmsford, with Graham Gooch – who scored 2,746 first-class runs at 101.70 across the summer, including 456 in one Test against India at Lord’s – and Paul Pritchard scoring double hundreds.

“We just spent two days going around the park,” says Agnew, whose figures of 0-170 were the worst in Leicestershire’s history at the time. “I remember at the end of my run, when Gooch was well over 100, I shouted out to whoever it was at deep square-leg to come in and save the single. I ran in and of course it was a bluff; I bowled the quickest bouncer I could muster at Gooch who smashed it for six. ‘Nice try, Aggy,’ he said. ‘You’ll have to do better than that, mate’.

“But the lowest moment was when Neil Foster came out to bat. He and I always had a spiky but friendly relationship. We were good mates but very much in competition with one another. We were knackered, the ball was a cut-up rag and he came out and slogged it. When he was in the nineties I bowled him a bouncer, he top-edged it and a sitter was put down at fine-leg. He went on to get a hundred, which was one of the lowest points of my life, I think. For the rest of the summer, at the start of every game, no matter where it was, there’d be an envelope waiting for me from Neil with a photocopy of my bowling figures in it.”

The former England fast bowler recalls that it was during the Chelmsford run spree that he accepted an offer to become cricket correspondent for the Today newspaper, paving the way for his retirement at the end of the season. “It was a great offer, and there was no way I could’ve turned it down because jobs were so rare, but I think I probably looked at the way the wind was blowing and figured it was time to go.”

Agnew was by no means the only bowler to suffer. The 1991 Wisden Almanack reported that of all those who bowled more than 200 overs and took 10 wickets in Championship cricket in 1989, 38 averaged less than 26. In 1990 only five bowlers managed to do so: Malcolm Marshall, Ian Bishop, Curtly Ambrose, Waqar Younis and Ole Mortensen.

“The bowlers were pissed off,” says Alan Butcher, who captained Glamorgan and scored a career-best 2,116 first-class runs for the season, averaging 58.77 and sharing 10 century stands with his opening partner Hugh Morris. “But the Reader ball we used to play with had such a pronounced seam, they’d had their moment in the sun, or perhaps in the overcast gloom.

“I did feel in extremely good form, and I had done for most of my time at Glamorgan. For the first time in my career I’d seen a psychologist on a regular basis and I had a zen-like feeling when I batted. I never went through a period during that time when I felt out of nick. That combined with the pitches and the ball, it just came together.” 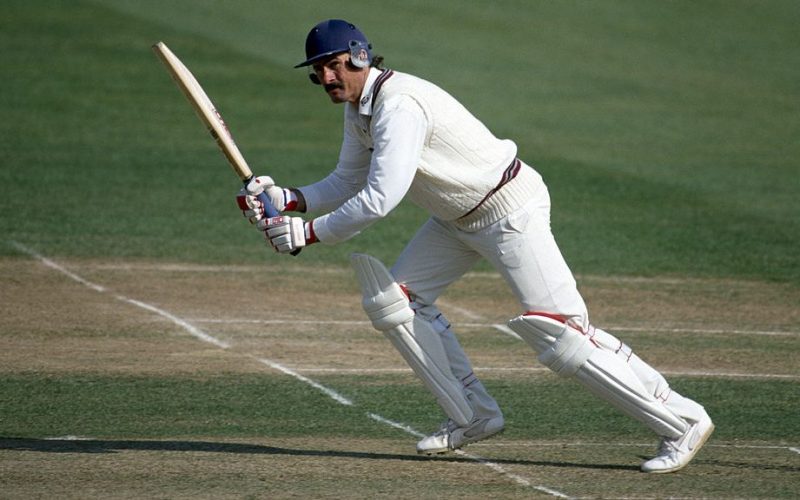 Jimmy Cook was a prolific run-scorer for Somerset

David Ward was another batsman enjoying a golden summer. Surrey’s hard-hitting right-hander had been in and out of the side since scoring a century on his first-class debut in 1985 but was buoyed after being told he would start the season as wicketkeeper, guaranteeing him a first-team spot. A century against Oxford University got him up and running before he notched another against a Hampshire attack led by Malcolm Marshall in his next match. Ward finished the summer with 2,072 first-class runs at 76.74, signing off the season with two double-hundreds in his last five knocks.

“Everybody says the ball was the main reason for the run glut,” says Ward. “And I didn’t get too many years where I averaged that sort of level. But I like to think that I played quite well. If it was just the slightly smaller seam which produced a more batter-friendly year, why didn’t everybody get millions of runs? As someone who did get some runs, that’s my stance and I’m sticking to it!”

Aside from the ball and the pitches, Butcher, who made his first-class debut in 1972 and retired in 1992, says 1990 was “without question the easiest point in my career to score runs” and describes county attacks of the time as comparatively weak. “In earlier years there were bowlers who would just stop me scoring. You didn’t know where your runs were going to come from.”

It’s a theme that Jack Bannister explores in his uncompromising piece from the 1991 Wisden Almanack titled ‘Don’t Blame The Ball’. Bannister argued that the combination of the nine-strand ball and flat pitches had shown up the deficiencies in what he described as “the unimaginative purveyor of the kind of seam bowling which relies more on containment than penetration”.

“The Reader balls used until 1989 made life easy for such bowlers,” wrote the former Warwickshire seamer. “They just had to point it and wait for the hand grenade to explode. Subtleties, such as swinging the ball, varying the point of delivery and change of pace, were ignored, simply because they were unnecessary. Now they are required, and any bowler who cannot master what used to be ordinary basics will have to look for another job.”

Bannister added that Angus Fraser, who took 41 Championship wickets at 26.17 as Middlesex won the title, “glitters like a lone jewel among much dross in English cricket”.

“We bowlers like to moan at the best of times and I’m sure there were a few egos bruised by what was taking place,” says Fraser. “But I think it was the right route to go down in a lot of ways. I’m fighting against my breed here, but as a bowler you’ve got to learn to hit a good length and be disciplined.

“When the sun’s shining and you’ve got some runs, the radio’s on and the window’s open, and you’re just enjoying your drive home”

“I probably look back on that as one of my better summers. Doing well for England, winning my first Championship. That was a really enjoyable season. There’s nothing wrong with having to work hard every now and then is there?”

Bannister reported that while “the cricketers, through their association, and the captains begged the TCCB to relent and increase the strands for 1991 either to 12 or 15… the cricket committee stuck to its guns”, and the runs continued to flow the following season, Jimmy Cook notching another 11 first-class hundreds. But a 26 per cent dip in the number of first-class centuries from 1990 to 1991 suggests some mercy was at least shown to bowlers in terms of pitch preparation.

Ward, so prolific as Surrey’s No.4 in 1990, was still in good touch the following summer, passing 1,000 runs. But for him, and for county cricket in general, there has never been another summer quite like ‘The Year of the Bat’.

“When you’re going well, you don’t think about it,” says Ward. “You just go out and bat. When you’re going badly the windows are up as you’re driving out the gate, the radio’s off, you keep replaying how you got out. But when the sun’s shining and you’ve got some runs, the radio’s on and the window’s open, and you’re just enjoying your drive home.

“The first game of the following season I asked Stewie [Alec Stewart] what number I was batting and he said No.6. I said, ‘I’ve just got 2,000 runs last year’. ‘That was last year,’ he replied. Normal service resumed.”