In the first of a new series brought to you in association with Proatar, Michael Holding recalls the hard yards and bumps in the road along the way to becoming one of the most complete fast bowlers in history. First published in issue 23 of Wisden Cricket Monthly.

I’ve been a member at Melbourne Cricket Club in Jamaica since birth – my father registered me before I was born. I tended to do things quite naturally, but there were still people who helped me through. There were two bowlers in particular who took me under their wing.

One was Bruce Wellington, a left-arm spinner who played for Jamaica, and the other was Arthur Barrett, a leg-spinner who played for Jamaica and the West Indies. As a kid, at weekends I used to play friendly matches in the bauxite areas of Jamaica, because the bauxite mining companies had quite a lot of money and they would invite clubs like us to come down and play. We used to refer to it as ‘curry goat cricket’ because that was always our lunch.

My father used to buy cricket books for me. The usual coaching thing would say that to get the ball going away to the slips you should slant the seam, and to slant it the other way to get it coming in. I was doing as the books told me, but I was struggling to get the ball to land on the seam. And one day Bruce Wellington came over to me and said, ‘Mikey, you don’t need to be slanting the seam at all. Keep the seam straight and upright in your two fingers and use your body and your action to get the ball to go where you want it to go’. I held on to this advice for the rest of my career.

It was Arthur Barrett who taught me how to get it coming back into the right-hander. I put my left arm in a different position and opened up my left leg on the bowling crease. I was very eager to learn that. Because at schoolboy level, as I was getting quicker, not many catches were being taken. 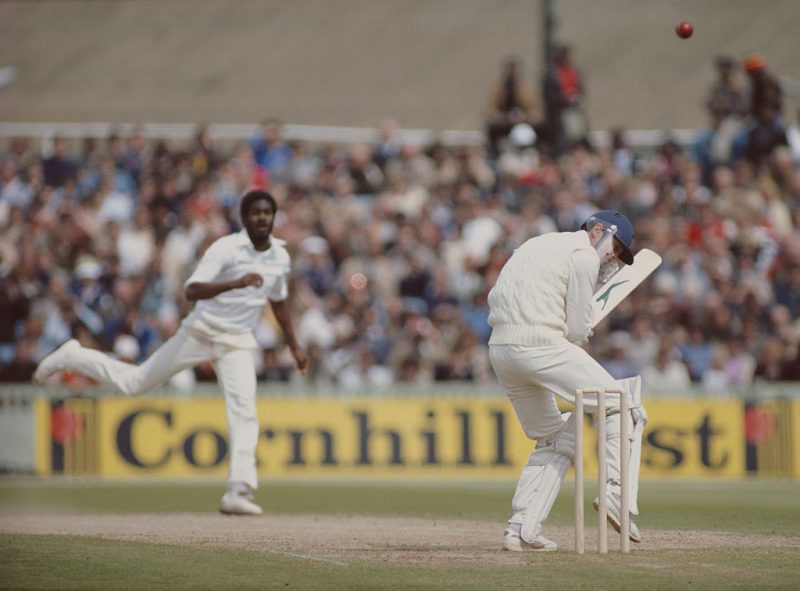 I only started bowling fast when I was 19, and getting close to playing for Jamaica. I was still tending to bowl within myself. I had a coach at school who didn’t believe in youngsters over-extending themselves as fast bowlers. He believed that fast bowling was hard work, an unnatural thing to do, and that you needed a fully formed body to really extend yourself. He insisted that I not try and bowl as fast as I possibly could.

Andy Roberts used to go about the place looking quite surly, and people thought he was such a moody fellow. But because we roomed together, I got to understand how bright he was, how quickly he could assess opposition batsmen and work out how to bowl to them. I remember we were in India once. He was sick, so he was in the dressing room watching. I was bowling to Syed Kirmani, and he got a message sent out to me to go round the wicket and aim for Kirmani’s leg stump. Initially I thought, ‘Why is Andy telling me to go round the wicket and bowl at his leg stump?’ I think it took three balls for me to hit his leg stump.

"The speech which he generated for his deceptive approach to the stumps was..frightening." – Tony Cozier

Most of my career I was able to push myself up to 90 per cent of my full pace. I didn’t play as much cricket as these guys do now. I didn’t play county cricket until I was almost retired, and Test cricket wasn’t wall-to-wall as it is now. I played for the West Indies for 12 years, missed two years because of World Series Cricket in Australia, and I only played 60 Test matches. That’s five Test matches a year.

As a fast bowler, as you play in different conditions, you have to be able to adjust your line and length at will. I keep on hearing people talk about a bowler’s ‘natural length’. But you can’t have a natural length. Your natural length has to depend on the pitch. It should be close to being automatic that you adjust the length at which you bowl.

I didn’t get much movement because of my pace. There were times when I had to take the pitch out of the equation. At The Oval in 1976, when I took 14 wickets, I mainly bowled yorkers. But when I got it right I got the wickets – 12 of the 14 were either bowled or lbw.

I played league cricket in 1980 for Rishton in the Lancashire league. I bowled off a very short run, because almost every time I played a match, it was wet. So it was like adopting a new technique. And then after that season at Rishton, going back into traditional long-form cricket, I struggled for a while to get back my flow. Fast bowling is all about rhythm, running in smooth and not even having to think about it.

Towards the end, I lost a bit of my pace. Technically I didn’t change, but I was bowling much more off my shorter run. After having my knee operation, my mind just wouldn’t allow me to let loose. It wasn’t as mentally satisfying, bowling like that. I still got wickets, but mentally and psychologically I felt better off the long run. In some ways it was a case of feeling that the more hard work, the more worth it were the results.

The one piece of advice I would offer was what my coach gave me. Don’t try and over-extend yourself as a teenager. Bowl well within yourself, but at the same time, train really hard. Because all that training will benefit you later on in life.

Michael Holding is one of the legends of cricket available on Proatar, the coaching and mentoring app. Send a video of your skills and get it analysed by Mikey as he does on TV. Download the app and use code XYZ to get 10% off your first booking.