The inaugural day/night Ashes Test may have ended in a draw, but it was far from boring. This was a match with much to enjoy, for fans of both sides and for the neutral.

First, what it means in the context of the series. Neither side will be too disheartened with the result. Australia missed the chance to seal the Ashes, but know that they need just one T20 victory to do so, while England will be happy to remain in contention though behind the eight-ball.

Both sides too will be pleased with how they performed, especially considering this was their first Test since 2015; though there was perhaps a little long-form rust, they adapted well.

For England, the standout was Heather Knight, now England’s most dependable performer, who chipped in with a pair of contrasting fifties, each perfectly suited to the match situation at the time, one a platform-setter, the other a match-saver. Then there was Tammy Beaumont, who, of the post-Edwards improvers, is perhaps the most suited to this format, possessing all the sticktoitiveness multi-day cricket requires. She displayed the tenacity we’ve come to expect in compiling a first-innings 70, and looked to be giving a second-innings reprisal before being bowled by a ripper from Test debutant Amanda-Jade Wellington – it pitched leg and clipped off in a manner not dissimilar to a famous ball by another Australian leg-spinner.

Georgia Elwiss, playing her first England game in just under a year, faced almost 300 balls across both innings for 68 runs – a performance unlikely to win her a limited-overs recall, and all the more special for it. Sarah Taylor added another classic catch to the collection, standing up to Anya Shrubsole and gobbling up a healthy nick from a full-blooded Elyse Villani drive. Spin duo Laura Marsh and Sophie Ecclestone both impressed, Marsh with her control, and Ecclestone with her penetration and continued impression that, even aged 18, nothing will ever faze her.

For Australia, though there wasn’t a ‘c Healy b McGrath’ to inspire reminiscence in the scorecard, Alyssa and Tahlia both contributed vital 40s to help their side recover from 168-5. McGrath’s bowling too was solid, although not as eye-catching as Wellington’s, who always seemed most likely to break the game open. 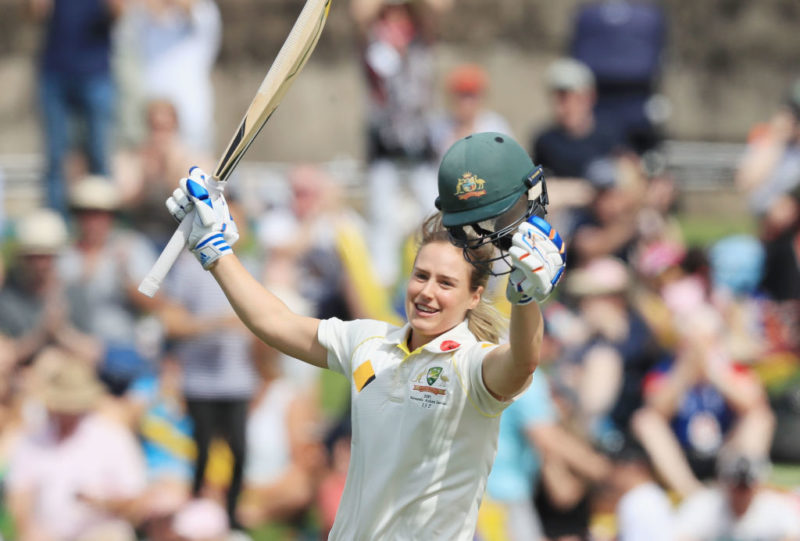 And then there was Ellyse Perry, who gave fans one of the all-time great innings to savour. She extended her first international century to 213*, the highest Test innings by an Australian woman, and the highest by a woman on Australian soil, a fact all the more remarkable considering she had to rescue her side, who were 95-4 at one point. They were staring down a hefty deficit before Perry took hold, lifting them to a lead of 168, a position from which they couldn’t lose.

It was an accomplished and at times dominant innings, with its only flaw Perry’s premature celebration of her double hundred: on 194, the all-rounder smashed Laura Marsh deep into the leg side, seemingly for six, only for the TV umpire to rule that it had bounced inside the rope. A single left last batsman Megan Schutt to play out the last two balls of Marsh’s over, but she managed to do so, and Perry was soon smoking one down the ground for four, before a more muted celebration. If ever an innings deserved two rounds of applause it was this one. A four and a six brought about a declaration, giving Australia a day and a bit to bowl England out and chase down the leftovers, but England rose to the challenge and in reality, were virtually untroubled.

Some might look at the scorecard, see that only 21 wickets fell in four days, and conclude that this was a dull game on a dull pitch played by teams without a sense of adventure. In reality, while it didn’t pulsate, it ebbed and flowed, and the result was largely down to the excellence of both sides, neither of whom deserved to be beaten. The drama and quality was demonstrated by the attendance of over 12,000 across the four days, and had a fifth day been available this game would have been delicately poised, with all results still possible.

Any ‘traditionalists’, yet to fully accept women’s cricket, who caught a glimpse of this game might even have been more convinced by what was on display than by England’s World Cup win. This was Proper Test Cricket, and served not just as an argument that there should be more women’s Tests, but that they should be extended by a day.

This game was a draw, but, to use the old cliché, it might be that cricket was the winner.