England defeated Sri Lanka by 18 runs on DLS method in the fourth ODI at Pallekele to take an unassailable 3-0 lead in the series with one match still to play.

The series has been blighted by rain and that theme continued, with a heavy downpour halting England’s reply to Sri Lanka’s 273-7 after 27 overs. At that stage the visitors were 132-2, 18 ahead of the par DLS score.

Niroshan Dickwella (52) and Dasun Shanaka (66) led the charge for the hosts after Eoin Morgan had won the toss and elected to field. Moeen Ali (2-55) and Adil Rashid (1-36) continued their fine recent form, while Tom Curran (1-50) impressed again in the death overs.

In reply, Alex Hales, selected in place of the injured Jonny Bairstow, made just 12 before he was stumped by Dickwella off the bowling of mystery spinner Akila Dananjaya but Jason Roy (45) ensured England kept their noses in front until he was trapped lbw by the same bowler. 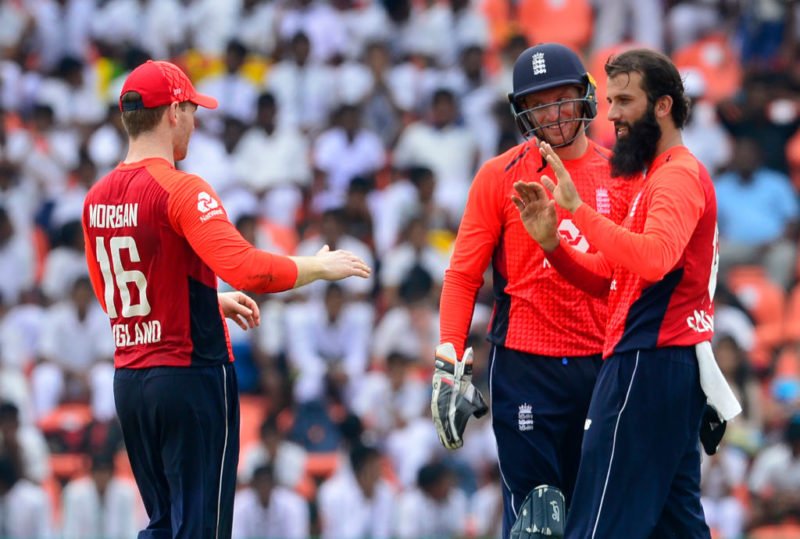 Moeen Ali took two wickets before the rain came down

From there Morgan (31*) and Joe Root (32*) masterminded the chase, ensuring England were ahead on DLS with room to spare as dark clouds engulfed the ground before the inevitable downpour.

“I thought today was quite a scrappy game, to be honest,” Morgan told Sky Sports after the match. “We had the better of the conditions having won the toss and bowled and I felt the wicket was a bit tacky and turned a little more than it probably did when we batted. But we felt that Sri Lanka crept up to a very competitive score. We could have been more disciplined in the areas that we bowled. Credit to Sri Lanka, they fought back well.”

Related Story: ‘The worst decision ever by any captain’: Warne on Ponting’s Edgbaston toss call

With the series in the bag, Morgan didn’t rule out making changes for the final match of the series in Colombo, with Joe Denly, Sam Curran, Mark Wood and Liam Plunkett waiting in the wings.

“Just because we’ve won the series doesn’t mean that we don’t want to win the next game,” added England’s captain. “It’s an important game but also maybe an opportunity to look at some other guys as well.”