“Sometimes dreams come true,” Alastair Cook told Sky Sports in a chat at the end of the fourth day of the fifth and final Test against India at The Oval on Monday, September 10.

It must count as a bit surreal – not only has Cook hit 71 and 147 in his farewell Test match, he might have done so in an England win if the bowlers can pick up the seven remaining wickets on the final day.

India, chasing 464 to make it 2-3 after Cook’s 33rd Test century, ended the fourth day at 58-3, after having slipped to 2-3. They have recovered a bit, but will have to bat better than they have all series to save this one. 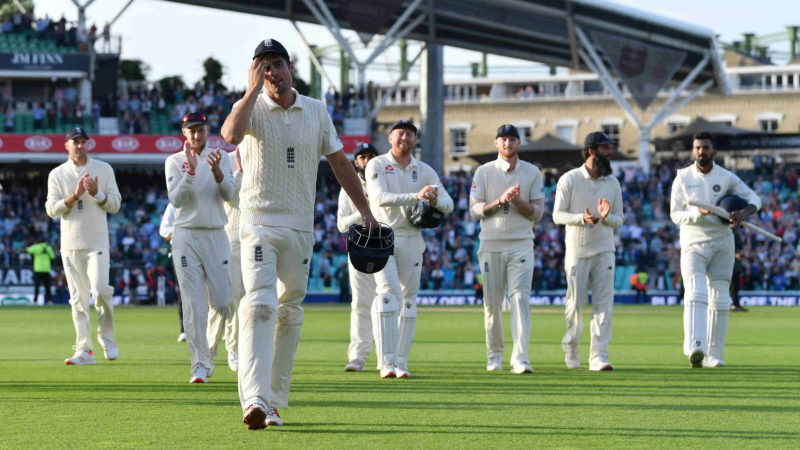 For Cook, who also went past Kumar Sangakkara to reach the fifth spot in the list of highest Test run-getters of all time during his final innings, it will be a great way to round off a stellar career, which began with a century too, against the same opposition away in Nagpur in 2006.

“It’s one of those days where you will look back and forever go ‘wow!’,” he said.

Had one of those ‘I was there’ sporting moments today. Cooky’s 💯. Wonderful day. So many emotions. Everyone at The Oval today will remember that for a long time 😀 pic.twitter.com/3Q2pJxxW3Y

“It has been one of those ‘don’t get out for nought’ games for me,” he told reporters after the day’s play. “The standing ovation I got walking out this morning, (I said) ‘you’ve got to score a couple at least’ or it would have been embarrassing.”

WATCH: Highlights from one of the most sensational days in English cricket history!

The runs have made a special time for the Cook family even more remarkable, as Alastair and Alice are expecting their third child. “It’s been the most surreal four days of my life really – I suppose if she (Alice) goes into labour tonight that will probably top it off but it’s been incredible,” he said.

“There’s a few of my friends here as well so for that all to happen today and every reception I’ve had over the last four days it’s just been incredible, even that last couple of overs when the whole crowd were singing my Barmy Army (fan) songs, incredibly special.”

"It's obviously a big decision because chasing your dreams, playing for England is all I've ever really known"

In a Test career that will end after over a decade of top-drawer performances, picking the best day is tough, but this one will rank as one of the most memorable, the former captain admitted.

“On a purely selfish point of view, I couldn’t have asked for a better week for me, so yes, on that side (it is memorable). But obviously there have been bigger things in more important games that have meant more,” he said. 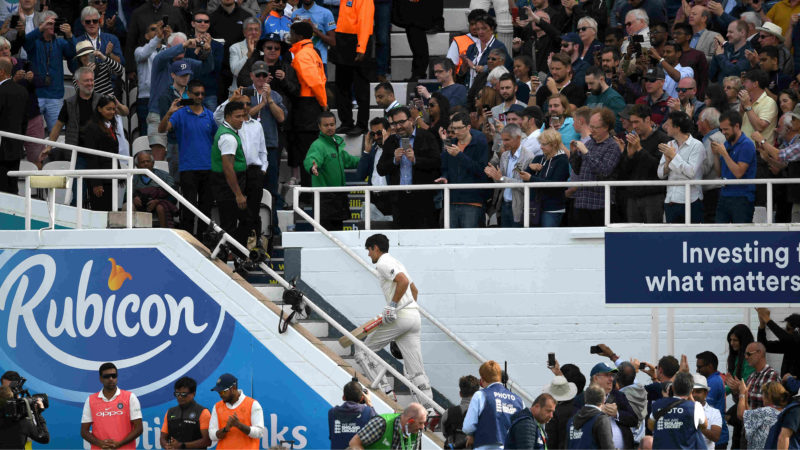 “To perform and have a day like that I suppose after 160 other games, it’s a nice way to go. It’s just time for me, it’s time for my family and now it makes it even better. It’s always nice people wanting you a little bit more than trying to kick you out and to go out on your own terms (makes it special).”

And no, there’s no going back on the decision. “Over the last 12-18 months, things have started to creep into my mind and losing that edge which has definitely happened in training and stuff so that decision was made for me, kind of,” Cook explained.

“But it’s obviously a big decision because chasing your dreams, playing for England is all I’ve ever really known. When you know it’s right, it’s right. This is just the icing on the cake.”