England are losing the race to join Australia in the T20 tri-series final after being defeated by New Zealand, who secured their first points of the series as England remain rooted to the foot of the table after their third successive loss.

England’s bowlers were made to toil as the home side reached 196/5 with Martin Guptill smashing 65 and Kane Williamson 72. The tourists had threatened to cause an upset as Alex Hales thrilled at the top and Malan carried the momentum forward, but the chase derailed as England reached 184/9 to give New Zealand a 12-run victory. 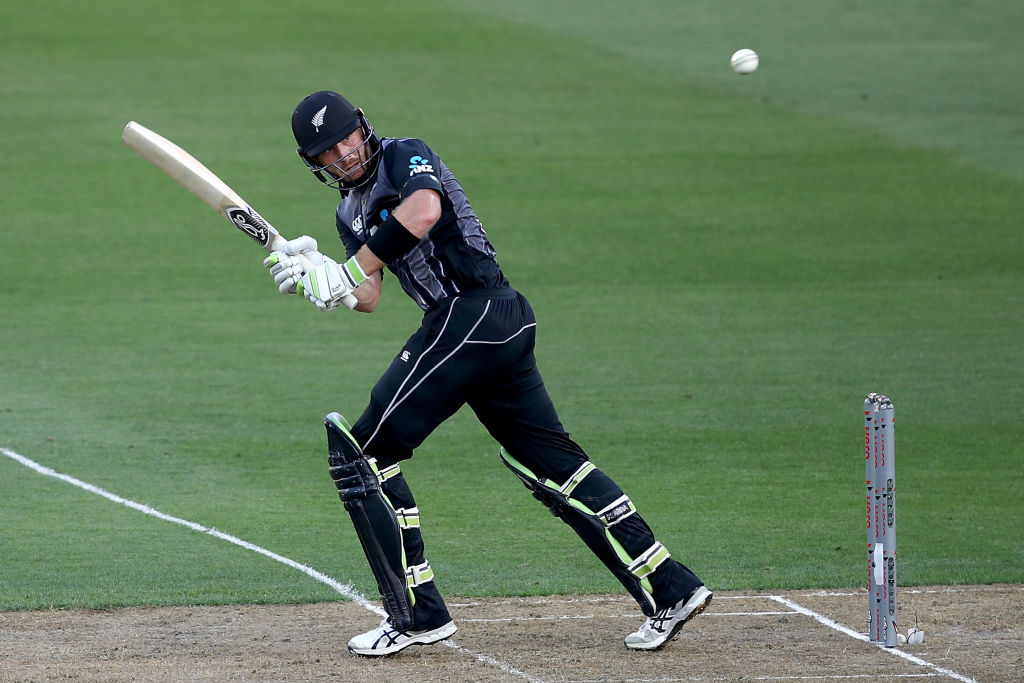 Martin Guptill hit himself back into form

Jos Buttler, stand-in captain due to Eoin Morgan’s absence through injury, won the toss and elected to chase on a pitch from which neither captain really knew what to expect. After Tom Bruce and Tom Blundell dropped out of the Kiwis’ 13-man squad, the uncapped wicketkeeper Tim Seifert and former Hong Kong international Mark Chapman were given a chance to impress for the hosts.

England, meanwhile, turned to veteran seam bowler Liam Plunkett to supplement their existing pace battery of Chis Jordan, Mark Wood and David Willey, but the Yorkshire ace went wicketless as Guptill and Williamson dented England’s hopes of a spot in the series finale.

Guptill and Munro had put on 39 when the latter departed in the fourth over, when Billings grappled a chance at long-leg after a top-edge from a short-of-a-length ball from Wood. Nine overs later, the experienced duo, ranked the 11th and 13th best T20 batsmen in the world respectively, had carried the Kiwis to 121 by the time Guptill paddled straight to short fine-leg off a low full toss outside leg stump off Rashid. 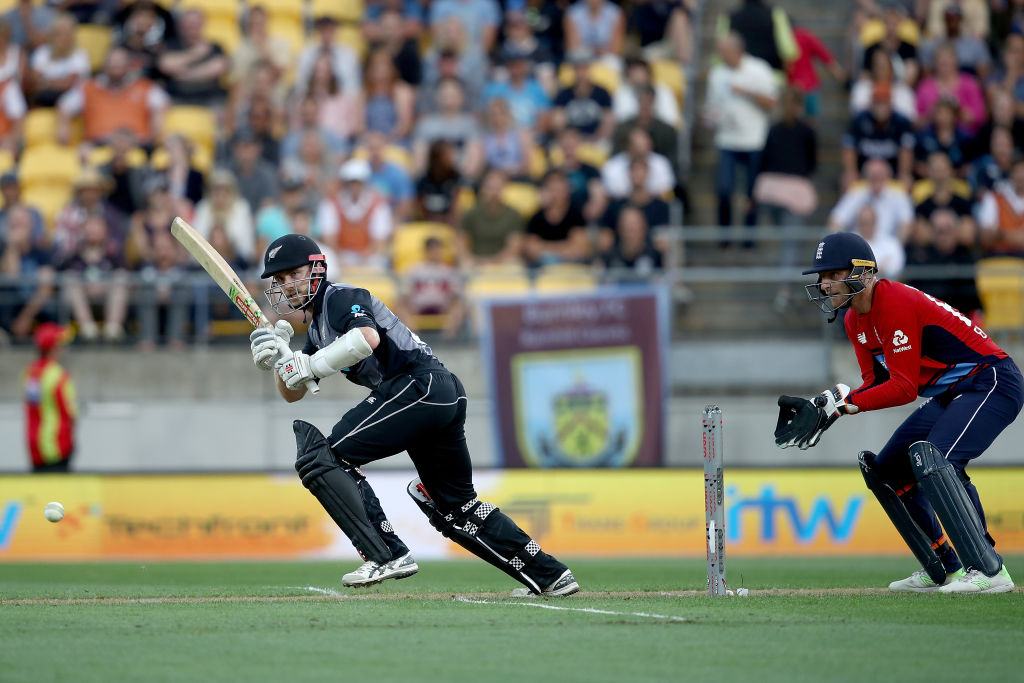 It was a silly shot, but the damage had largely been done. The opener scored a 40-ball 65, which included three sixes and six fours, and tucked into Willey and Wood from the start to give New Zealand’s innings an early lift-off. It was an impressive innings, made even more so by the fact the opener had just 114 runs to his name from his last nine airings.

Guptill’s back-to-back sixes off Rashid allowed New Zealand to recover after a few quiet overs after the Powerplay, which lifted New Zealand to 120/1. It was then time for a mini England revival, as Guptill and de Grandhomme – caught by Jordan off the bowling of Rashid – both fell with the score on 121.

Williamson wasn’t far short of Guptill’s strike rate of 162.50, with 156.52. His 46-ball 72 was the highest score of the match. Jordan removed Williamson with the last ball of the 17th over after the Kiwi captain wandered across his crease before the ball took his off stump via a flick off the pad.

Chapman had entered the arena to witness his skipper smash Wood for 20 runs in the 16th over, before grabbing some of the limelight with a flick over the square-leg boundary off Willey. He eventually holed out at deep mid-wicket, caught by Billings off the bowling of Wood after Billings had spilled a similar chance. Seifert added 14 more runs from just six deliveries, including two aggressive hits off Jordan over point and long-off. 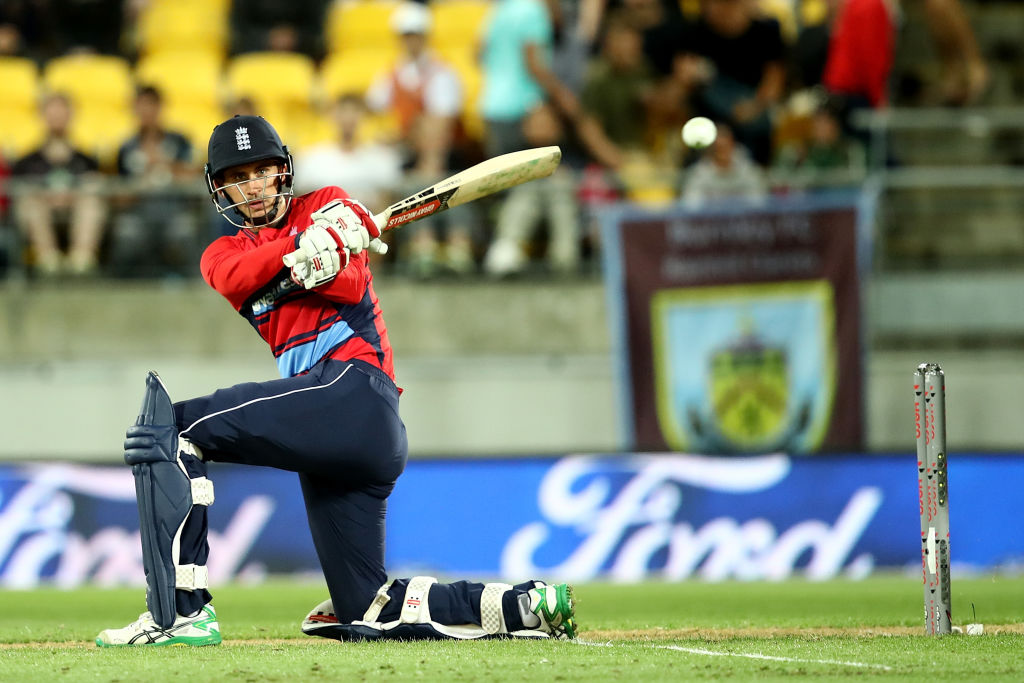 England’s reply got off to a promising start as the eighth-highest ranked T20 batsman in world cricket, Alex Hales, along with Dawid Malan, propelled England past fifty in just the fifth over, with boundaries coming frequently. That was despite Jason Roy’s early departure – his third single-digit score in the T20 tri-series.

The big hitting continued as Hales smashed six fours and three sixes before toe-ending a pull off Ish Sodhi to de Grandhomme at deep mid-wicket. After the opener’s 24-ball 47, England found themselves at 79/2 in the ninth over, as England’s powerful start stuttered.

If the game hung in the balance, momentum shifted in New Zealand’s favour when Williamson claimed a tremendous diving direct hit to see off James Vince, before Sodhi removed prize scalp Jos Buttler caught by Southee at long-off. England were 109/4 at the end of the 12th as they continued to play with freedom, with Malan still standing. Billings swept Mitchell Santner to Sodhi at short fine-leg, before the former spilled a straightforward chance to give Willey a reprieve. 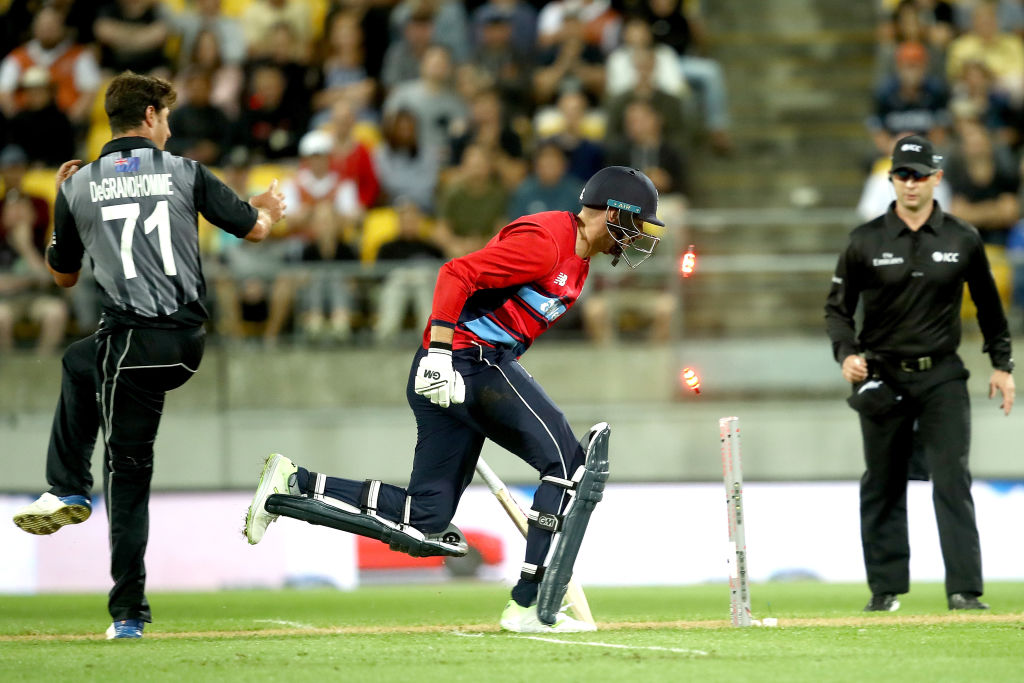 Malan’s 40-ball 59 – his second half-century of the tournament, which included six fours and two sixes – was not enough to save the tourists. He departed soon after raising his bat – caught by Trent Boult off the bowling of Santner.

England were still very much in the game, but with just four wickets left New Zealand knew a few breakthroughs could diminish all hopes of a late-innings onslaught. Boult delivered; two brilliant yorkers removed Jordan and Plunkett in the space of two balls, which left too much for England’s tail to do.

The next match in the T20 tri-series will be played between New Zealand and Australia on Friday.