With Australia taking on Australia in Southampton, Taha Hashim made the trip down south to take in the opening day of an intriguing warm-up fixture for the Ashes.

It was a peculiar, almost hallucinogenic kind of day. Cameron Bancroft, Steve Smith and David Warner were all present on the field at the same time – a Newlands reunion. The World Cup run-machine Warner failed to land any punches with the bat; in fact, few did as 17 wickets fell. Temperatures in Southampton soared well beyond the 30 degrees Celsius mark to make the visiting Aussies feel very much at home. White shirts had numbers and names on the back. Australia took on Australia. 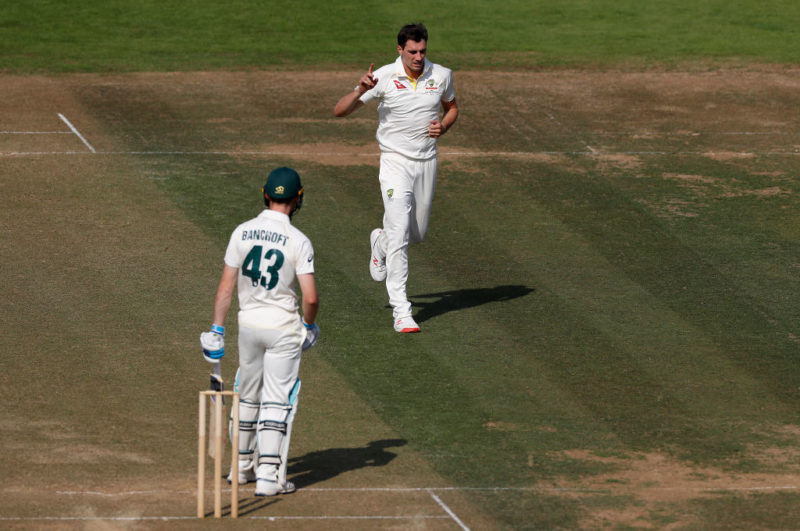 Yes, while England get set for a historic affair against Ireland at Lord’s, Australia have decided to ramp up their preparations for the Ashes by taking on themselves. Assembled on Tuesday were a Graeme Hick XII taking on a Brad Haddin XII, the start of a four-day shootout between 24 players all vying for a place in a final Ashes squad that will be announced on the fourth evening. Usman Khawaja, still nursing a hamstring injury from the World Cup, was the only man missing for the Australians.

The Haddin XII were put in to bat, and while David Warner fell for four, it saw to the arrival of Marnus Labuschagne, who has been busy filling his boots for Glamorgan in the County Championship with five hundreds and over 1000 runs in Division Two. There was a calmness that pervaded Labuschagne’s innings and escaped the rest of his batting colleagues. His forward defence is worth marvelling at, the front foot not hovering forward, but planted with authority. The head is firmly over the ball at the point of contact. And it was that lateness in his stroke that impressed so greatly in the opening session. 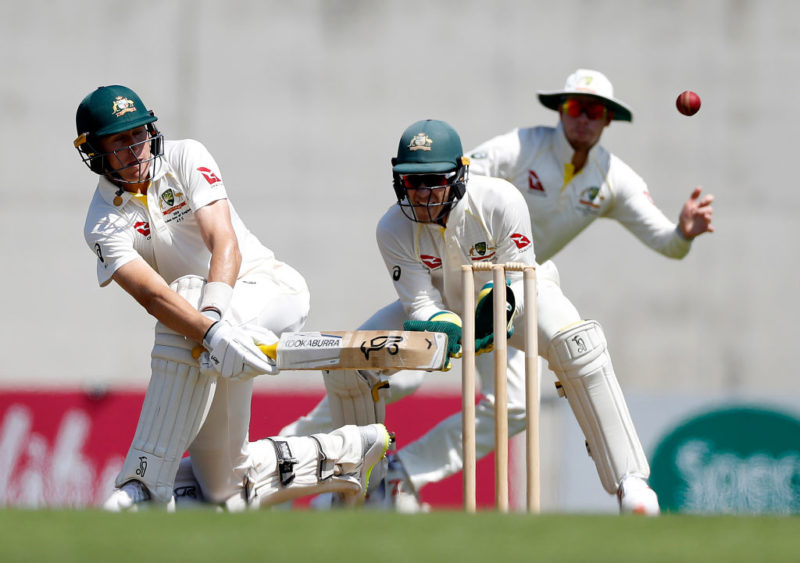 On a pitch offering exaggerated bounce, Labuschagne skipped down the track to Jackson Bird at one point and with soft hands, guided the seamer for four through the slip cordon. He was the only man able to ride the bounce on offer and when a bowler from the Hick XII erred, he pounced. A cover-drive off Chris Tremain was textbook and there was initiative against Nathan Lyon; the off-spinner’s first over saw the 25-year-old sweep towards fine leg and hit a back-foot punch through the covers, a showcase of cool, calculated footwork.

At lunch, the Haddin XII were languishing on 64-5, but not Labuschagne: 41 not out and revelling in his own little world. Labuschagne’s Test career has enjoyed a peculiar beginning. In the UAE last year it was his leg-spin that appeared more useful than his batting, before the home summer saw him thrust into the batting order at No.3. As one of a number of men auditioning for batting spots in Australia’s squad, a big score would have been a grand statement. Alas, James Pattinson intervened, preying on a prod from Labuschagne – his first mistake of the day – to find the outside edge and send him on his way. As such, a question mark hovers over whether a final place in Australia’s squad beckons.

England’s bowlers seem to be dropping like flies. James Anderson’s calf is dodgy, Jofra Archer and Mark Wood’s sides strained. In contrast, Australia have plenty of reserves in the bank. While the first-choice trio of Mitchell Starc, Pat Cummins and Josh Hazlewood found themselves together in the Haddin XII, a less-heralded group of seamers were making merry in the morning. Michael Neser is a name few will know around these parts, but the right-armer nibbled away liked a local veteran and removed both the openers. There came the bulky unit who will always have your attention: the fearsome James Pattinson. He bustled through the crease, quick and with the aid of a pitch making his deliveries carry towards Tim Paine’s head. And while only the one wicket came his way, he conceded just 16 from his 10 overs. 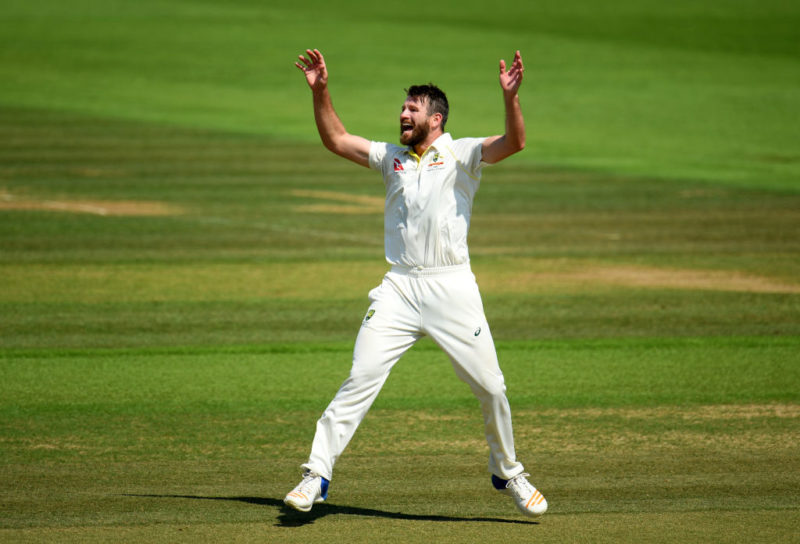 Although Neser finished with four wickets and Pattinson rattled the bat with venom, Jackson Bird was the most impressive bowler on display. His last Test appearance came in the MCG Test of 2017, a turgid affair that saw Alastair Cook run the Aussies into the ground with a double-century. But Bird is a bowler who – when straying away from a floaty length – can be a handful. His first over of the day was a fine example. He nearly cut Travis Head in half with a ball that shot off a length, and found his reward with the same line when Head lost his head with a slash that travelled fast towards Steve Smith in the slip cordon: a fine catch to match a fine spell.

Smith makes his return in whites…and dances away

It wasn’t a day for the batsmen as Pat Cummins, Josh Hazlewood and Peter Siddle showcased their skills when it came the turn of the Haddin XII to bowl. Bancroft’s awaited return saw him battle for 17 before Cummins squared him up to nab the edge. But the man from Perth has spent plenty of time in whites of late, captaining Durham in county cricket. Steve Smith, on the other hand, has been at the World Cup, where his time in coloured clothing saw him make a few fifties without really grabbing the limelight. But then again, with a Test average of 61.47, it’s the red-ball game in which he really thrives. 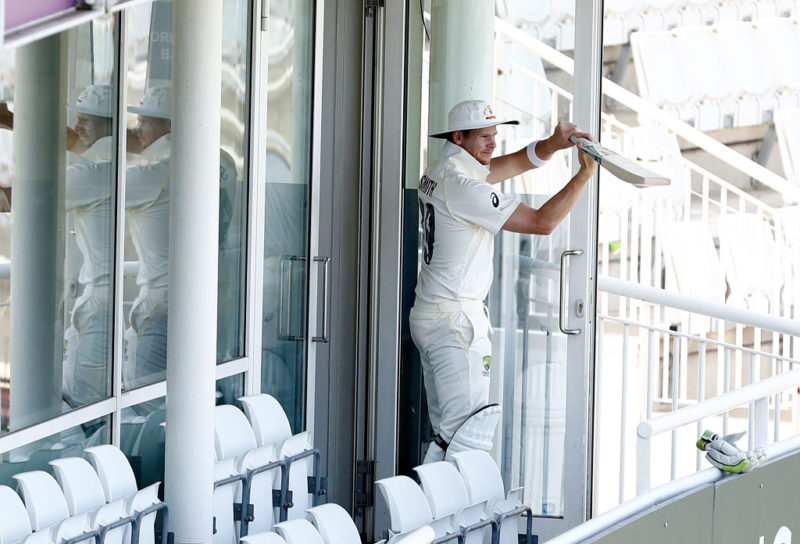 Always having a bat

There was little to write home about today, however. Nine runs came from his blade, and while he faced 18 balls, he must have played a thousand shots while at the crease. Smith’s fidgety ways when out in the middle are well known, and he was shadow-batting away between balls rather manically, his lightsaber swishes a sight to behold. It would have been apt for some funky tunes to start blaring out in the near-empty Ageas Bowl, allowing Smith to drop his bat and launch into a wide array of moves.

Smith became entrenched in a battle with Cummins, and while one wishy-washy drive over extra cover saw him play and miss, a repeated effort saw his stumps dismantled courtesy of an inside-edge. It brought an end to a colourful affair.