If there was one piece of footage that had tails wagging in anticipation of this Test series, it was of that Virat Kohli net session.

Drives, pulls, and even the most casual of reverse-sweeps; it seemed as if the contest beginning on Thursday was to be of the run-machine Kohli taking on Australia single-handedly.

This is how the best in the world nets.

The sound his bat makes is 😍😍pic.twitter.com/TLkV6F6wNs

It wasn’t to be another day of domination for India’s star man however, as he drove hard at a Pat Cummins delivery early on in the first session. While you might be fooled by his seemingly lackadaisical style at the crease, Usman Khawaja has worked tirelessly on his fitness over the last year.

Perhaps that was to explain for what unfolded next, as the batsman launched himself into the sky in almost superhuman fashion to pluck out an outrageous one-handed catch, leaving Kohli to depart for just three to his name.

Kohli’s dismissal followed on from a poor start by India, who had elected to bat. Ill-discipline outside  off stump seemed to be the order of the day, as KL Rahul and Murali Vijay edged behind to deliveries that could have been left alone. Australia’s catchers were not keen to upset the bowling attack, grappling any chances with glee.

Related Story: Stats: Rohit Sharma becomes third-fastest to 9,000 ODI runs
The removal of Kohli saw India stranded on 19-3 after just 10.3 overs. It seemed a case of déjà vu from previous Australian tours, as Cheteshwar Pujara watched his captain wander back to the dressing room, as the Australians huddled together celebrating the dismissal as if the match had just been handed to them on a silver platter.

And yet, while Kohli is the audacious frontman – a cricketing Jagger – Pujara is the Charlie Watts of the India side, ticking along at the back of the stage in an elegant yet understated manner. Rather than follow the lead of those who had fallen before him, the mighty Che decided to forge his own path, one built on patience and immense grit. 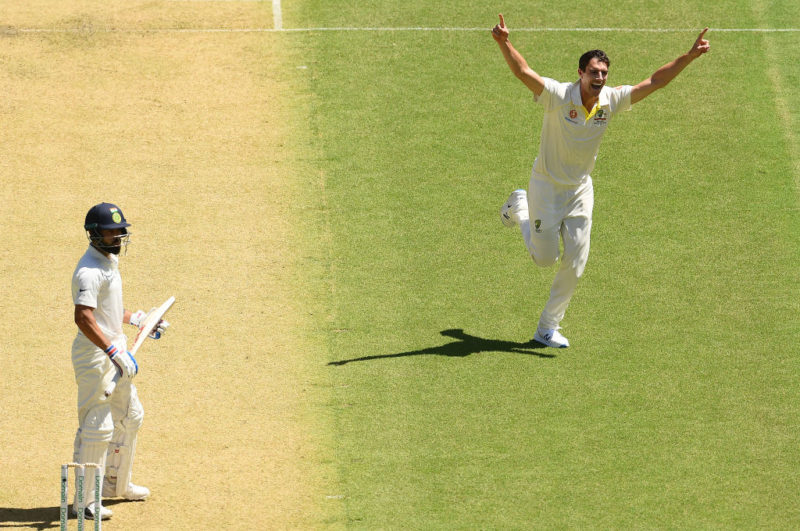 Josh Hazlewood was treated to a back-foot punch through point early on, a foreshadowing of the control that Pujara was to have over his batting throughout the day.

While Ajinkya Rahane wasn’t to offer much support, Rohit Sharma lent some more substantial help, exhibiting the glorious strokeplay that he has come to be known for. Rohit’s first boundary saw him stroke Nathan Lyon through the covers, but Australia held the upper hand at lunch with India 56-4.

While Pujara quietly ticked along, Rohit dominated the highlight reel. A lofted drive over extra cover for six off the bowling of Pat Cummins was so glorious that even Rohit knew it was quite special, holding his pose a tad bit longer as a favour to photographers around the ground. 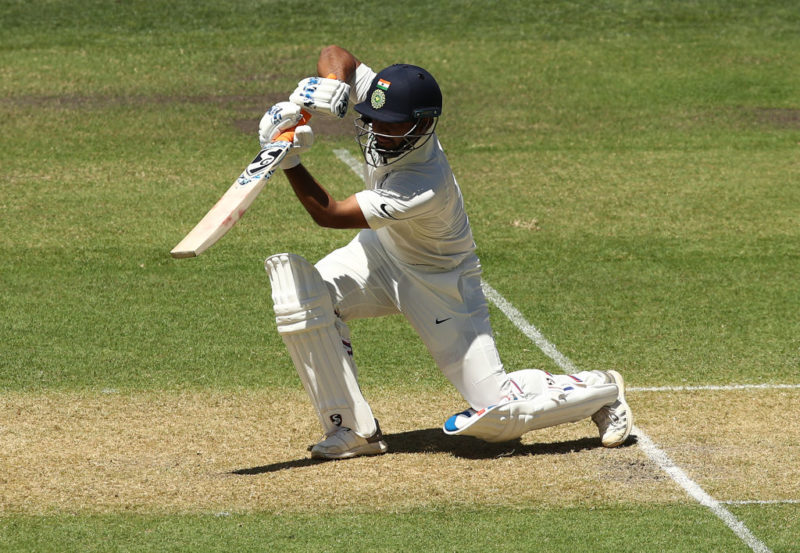 Rohit’s promise of a special innings was to be ruined by his own error, as an attempted whip through the leg side off Lyon was top-edged into the hands of debutant Marcus Harris at deep square-leg.

Pujara’s patience proved a contrast to his partners throughout the day, and he played Lyon with a  reassuring calmness, his footwork impeccable.

Related Story: Babar Azam ton in vain as Australia claim big victory
Rishabh Pant showcased the youthful exuberance that has been a feature of his fledgling Test career, a flick of the wrists against Mitchell Starc over square leg for six was almost disrespectful – the sheer nerve of the 21-year old to treat the Aussie paceman with such disdain.

Lyon put a halt to the fun, finding Pant’s edge with a gripping off-break. Ashwin joined Pujara for a re-building job, and did so in a responsible manner. Pujara made sure to dispatch of anything loose, cutting hard against Hazlewood and whipping away on the pads from Starc. 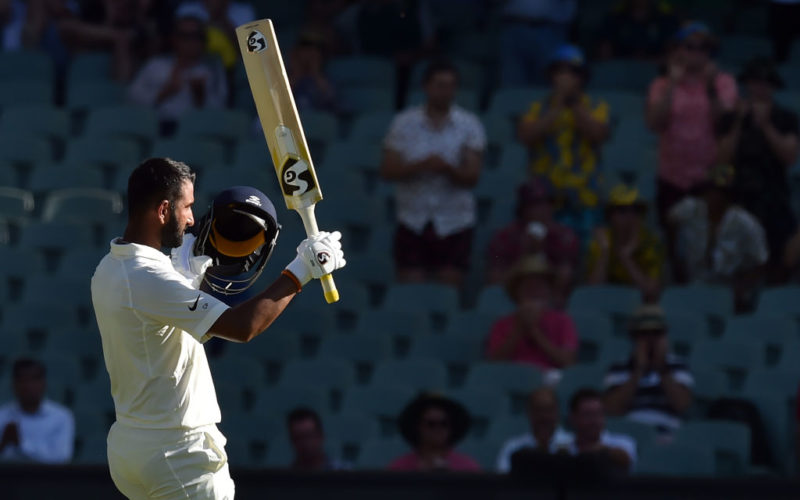 A century to remember

While Cummins found the edge of Ashwin for 25, Pujara upped the ante with just the tail to accompany him, hooking Hazlewood for six, before a pull for four took him to 99. It seemed that a little niggle in the hamstring was cause to break the shackles. The century – his first in Australia – arrived with a flick through midwicket for two.

He wasn’t to finish the day unbeaten however, falling for a monumental 123 to an acrobatic run-out from the livewire Pat Cummins, a pick-up and throw that saw him release the ball while suspended in the air at mid-on.

Unreal. This is simply stunning from @patcummins30, especially after sending down 19 rapid overs on a blazing hot Adelaide day!#AUSvIND | @Toyota_Aus pic.twitter.com/APvK1GYBRd

Nevertheless, Pujara has taken his side to a score of respectability at 250-9, and he was certainly pleased with his effort when speaking to reporters after play.

“It is one of my top innings in Test cricket, I could say top five,” said Pujara. “The way the team-mates appreciated it, they were saying it was one of the best.

Related Story: India stalwarts Rohit Sharma, Virat Kohli finish year in unique position
“To be honest, we should have batted better but they also bowled well in the first two sessions and I knew that I had to stay patient and wait for the loose balls.”

While Kohli and the wielding of his blade will continue to be the talk of the town, it is the irrepressible Pujara who has set the tone for India’s tour of Australia.