A world record, a hat-trick, and a series-clinching win. Rishad D’Souza picks out six crucial balls in Nagpur as India beat Bangladesh by 30 runs in the final T20I on Sunday, November 10.

Just that bit of luck

Shafiul Islam started things off on a great note for Bangladesh. His first over was a wicket-maiden, where he had Rohit Sharma chopping on. Then in his third, he foxed Shikhar Dhawan with a slower one, and the southpaw was caught at long-on. He very nearly had his third soon after.

Iyer, facing his first ball, was all hard hands to Shafiul, and got a loopy edge to backward point. Aminul Islam, however, dropped a fairly straight-forward chance. Iyer cashed in on the reprieve, and how!

KL Rahul often makes you marvel at the quality of his strokes. On the slow Nagpur pitch, he looked nonchalant from the beginning. Mustafizur offered him a bit of width on the first ball of the 10th over, and with what seemed like a gentle push, Rahul sent it racing to deep backward point.

Mustafizur, who hasn’t had the best series, over-pitched the fourth ball, and Rahul oozed elegance as he lofted that over mid-off for another four. He was later dismissed playing that very shot off a slower ball from Al-Amin Hossain in the 13th over, but not before bringing up his half-century, featuring seven boundaries, each one better than the other.

After being given a life on nought, Iyer wisely decided to take stock of the pitch before trying anything too fancy again. Once he got his eye in, Iyer dealt mainly in the currency of sixes.

He was especially brutal in the 15th over against Afif Hossain. He sent the first ball over long on with a big swing off the bat and repeated the shot next ball with little concern about the man stationed in the deep. Put under pressure, Afif served up a loopy full-pitched ball, which Iyer clubbed high into the stands over the deep mid-wicket boundary. 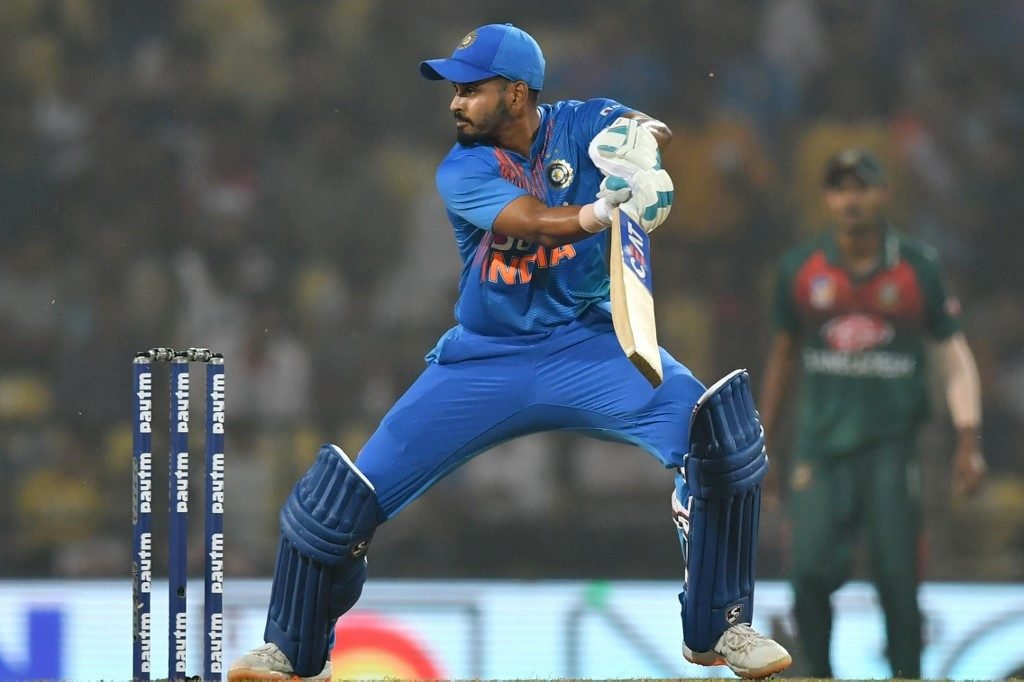 India could boost their total thanks to Shreyas Iyer’s blitz

Perhaps it is time to give Soumya Sarkar the bowler more respect than he’s accorded. Not so long ago, in a World Cup match against Australia, he removed David Warner, Aaron Finch and Usman Khawaja. He bowls military medium, but it is his discipline with areas that make him difficult to get away.

In the 17th over today, with Iyer going all guns blazing, he stuck to his strengths. Having knocked Rishabh Pant over with a simple, straight one, he bowled a cutter to Iyer, who holed out to long-on. Manish Pandey (22* off 13) finished well for India, taking them to 174-5 but things could have been a lot worse for Bangladesh if Iyer wasn’t dismissed then.

Liton Das showed his intent early on, striking two boundaries off Khaleel Ahmed in the first over. He tried to go again in the third off Chahar, but mistimed the pull and was caught at deep mid-wicket. Chahar then bowled it wide to Sarkar, who failed to keep his drive down and was caught at mid-off for a golden duck.

What an outing this has been for Deepak Chahar. Picks up 6 wickets against Bangladesh in the series decider ?? pic.twitter.com/YUVLC8bq6K

Chahar would then go onto dismiss Mohammad Mithun to break a threatening 98-run partnership between him and Mohammad Naim. He capped off a terrific day with a hat-trick to return figures of 6-7, bettering the 6-8 that Ajantha Mendis took against Zimbabwe in 2012.

Shivam Dube, a batting all-rounder, had been drafted in at No.7, but had to perform the role of a full bowler – a selection that was met with surprise by fans on Twitter as well as the commentators. As a seam bowler, there was extra pressure on him since the spinners were rendered ineffective due to the excessive presence of dew. But he made the opportunity count.

After an unimpressive first spell, he did wonders in his second. He dismissed Mushfiqur Rahim for a golden duck as the experienced batsman looked to steer him down to third man, only to get an inside-edge onto his stumps. While Naim was still out there, there was hope for Bangladesh. But Dube delivered an inch-perfect yorker to send his stumps flying, before dismissing Afif with a slower, short one to finish with figures of 3-30.

That spell left the lower-order exposed to a hungry Chahar, who cleaned the tail up in the space of three deliveries.