Centuries from Rory Burns and Joe Root underlined one of England’s better days on their tour of New Zealand. Taha Hashim looks back on the third day in Hamilton.

Forget the context of the match, this was just a lovely bit of skill. With the pitch offering little help, the wily Neil Wagner let fly a knuckle ball of the highest quality. From around the wicket the ball tailed in the manner of a Waqar yorker – simply mesmerising. Joe Root did enough at the other end, the toe of the bat getting in the way to get him off strike.

Rory Burns entered the day having had a tough time of it the previous evening, with two dropped catches keeping him alive. He looked far more assured following a night’s sleep; against Wagner, he negated the threat of the short ball with back-to-back pulls to the boundary. Nevertheless, Matt Henry was the man on the receiving end of the shot of the morning, with Burns driving brilliantly past the right of mid-on. It summed up an excellent morning for the English, with both Burns and Root notching half-centuries.

A terrific session from England.

With a clip to the leg side, Burns wanted two but Root sent him racing back after completing the first run. Fortunately for the England opener, a lack of success can frazzle minds in the field. Wagner picked up and threw after racing in from mid-on, with Tom Latham in position to take the stumps down. Henry intervened in comical fashion by advancing in front of Latham’s view before deflecting the ball away from the stumps. Burns was on the floor, head down, but undefeated.

Burns advanced to his second Test hundred, one he thoroughly deserved even if his knock had moments of fortune. But he was on his way after the next ball he faced, thanks to another comical episode. Burns was in jogging mode, while his skipper looked to be in the mood for two. Jeet Raval’s throw beat Burns’ rather tame slide of the bat when a full-blooded dive was required at the striker’s end. The third umpire took his time, seemingly troubled by the white bails which blended in with BJ Watling’s clothes and gloves. Eventually, the right call was made, and some yellow bails made their way onto the ground to avoid any future trouble. 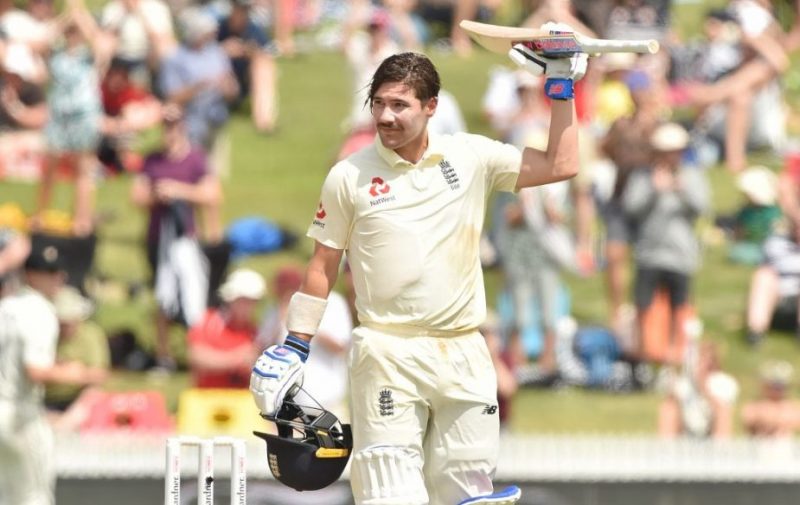 Burns celebrates his century. He was on his way back to the dressing room shortly after

Root moved into the nineties with a beautiful drive through the covers off Wagner, a shot designed for the snappers and the best of his knock. The century arrived a few overs later, breaking a nine-month drought in the format. It took 259 balls to get there – the slowest of his 17 Test tons, perhaps signalling that he wishes to lead the way with the more patient batting approach his side have adopted this tour. Tomorrow should offer more intrigue – England need Root to go on like Watling did in the first Test and display that they have it in them to grind sides down with conservatism.

A first sighter of Zak Crawley at Test level, and there was a bit of drama. His solitary run came with a dashing single that brought out a dive through the crease, and New Zealand’s fielders looked hopeful after a direct hit. Crawley survived, but he was out from his next ball faced, with a prod forward resulting in an outside-edge that Watling gobbled up behind the stumps. England will go again tomorrow on 269-5, trailing New Zealand by 106.