Cricket commentator and broadcaster Johnny Barran diarises the tale of the first Test between England and West Indies, taking you inside the commentary room and press box in Barbados.

Despite 433 Test wickets to his name and claiming a hat-trick and four wickets in five balls against the President’s XI (featuring seven internationals) in the warm-up, Stuart Broad’s prospects of a recall dominated discussion. The next talking point was the pitch. Would it be flat? Would it turn? Would it, as the locals thought, have pace and bounce? Opinion differed wildly. It wasn’t just Joe Root who was unsure.

In the pre-match presser the bulk of the questions to both captains were about a Geoffrey Boycott column describing the West Indies as an “ordinary” side, following on from Colin Graves’ “mediocre” assessment four years ago. Jason Holder replied in good grace, and insisted the comments served as further motivation. 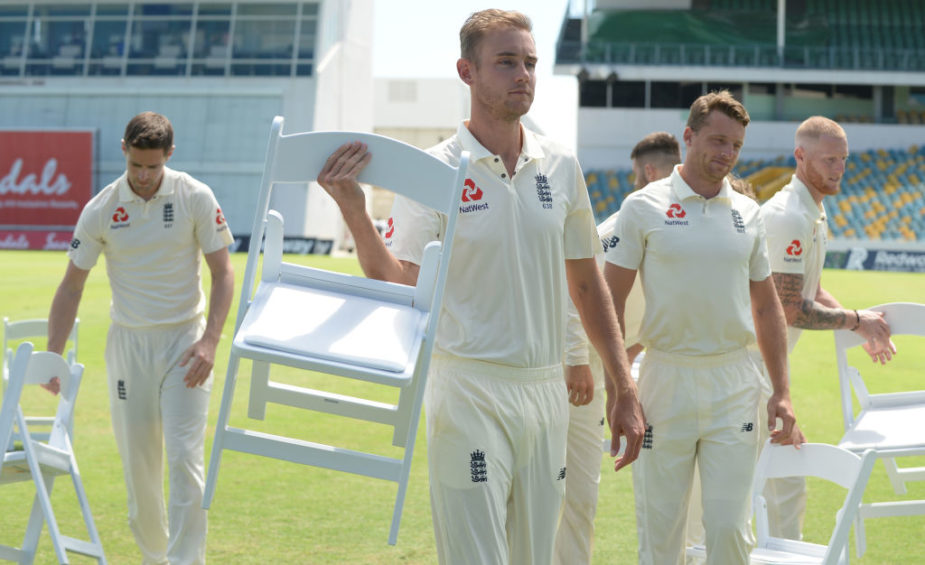 An estimated 9,000 British travel-makers have made their way to the Caribbean paradise for the first Test, and with the roads at bursting point – Barbados is the only country in the world to have more cars than people – many of the press contingent had a two-hour drive for an eight-mile journey, despite leaving at 7am.

All eyes were focused on the teams at the toss, and both sides named two markedly contrasting line-ups: England omitted Broad and played Sam Curran and Adil Rashid as they opted for three seamers and two spinners, while West Indies played four front-line seamers. Jason Holder won the toss and batted, with the last four Tests in Barbados having been won by the side batting first.

Barbados is not a happy hunting ground for England, with just two wins here since 1935 (1994 and 2004). I was lucky enough to have a bird’s-eye view of the action working as a commentator for the host broadcasters alongside a stellar line-up of Vic Marks, Tino Best, Donna Symonds, Roland Butcher and Reds Perriera, with guests that included Johnathan Agnew, Darren Gough and Colin Croft.

Related Story: ICC to stream 2010 World T20 final in full
On a surface that started sedately, England struggled to yield the desired effect with the new Dukes, as Kraigg Brathwaite and Jon Campbell put on 53 for the first wicket. Ben Stokes emerged to drag some life out of a sluggish surface, picking up three wickets in the afternoon, with the immaculate James Anderson picking up four wickets to limit the hosts to 264-8 at the close.

Although Shimron Hetmyer played beautifully for 67 not out, and Shai Hope and Royston Chase recorded half-centuries, the opinion in the press box was that, for England, it was an opportunity missed. Courtesy of information gleaned from the bars and cabs after the day’s play, the local Barbados community thought very differently; they believed the pitch would speed up on day two and start to cause the batsmen problems. Those theories prevailed. 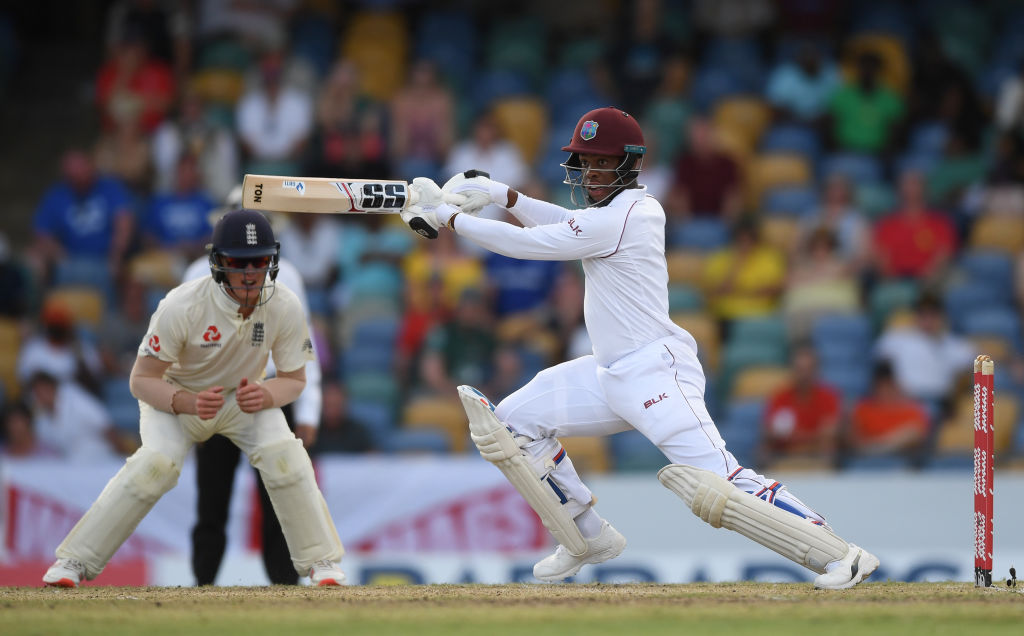 West Indies added a further 34 runs for their last two wickets, with Hetmyer hitting a splendid 81. What followed was breathtaking, with England getting demolished for 77. Keaton Jennings top-scored with 17, and only three others made double figures. Roach, making a mockery of the suggestion he had lost a yard of pace, led the attack taking five of the first six wickets as England failed to cope with the pace and bounce generated on a surface that had indeed quickened overnight. It all happened in the space of 30.2 overs, just two balls more than what a weary James Anderson bowled in the first innings.

Related Story: ‘I was spewing’: How Alastair Cook’s advice to Rory Burns backfired
The drama wasn’t to end there though, as West Indies lost five wickets for nine runs with Moeen Ali and Ben Stokes taking three and two wickets respectively, as they slumped from 52 without loss to 61-5. Hetymer and Shane Dowrich steadied the ship to leave West Indies 127-6 at the close – a staggering 18 wickets having fallen in the day.

Still, the real action was happening off the pitch, as my island hosts, East Bergholt Cricket Club, dressed up as medieval knights and danced the afternoon away. Getty Images and David ‘Bumble’ Lloyd’s effervescent commentary ensured their moves made their way around the globe. 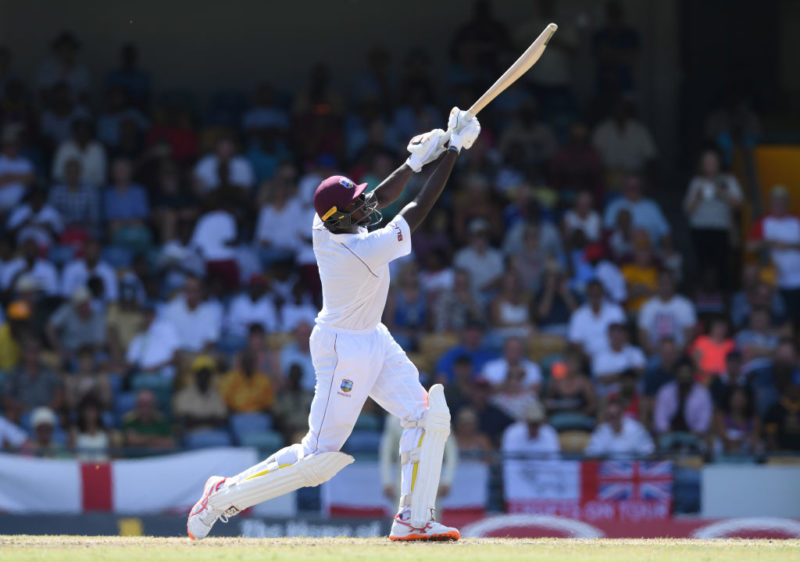 A wicketless day cemented West Indies’ dominant position as they declared on 415-6, with a lead of 627 courtesy of an unbroken seventh-wicket stand of 285 between Jason Holder, who became the third No.8 batsman in Test history to notch a double century, and Shane Dowrich, who finished 116 not out.

Still, the biggest cheer of the day was reserved for Stuart Broad when he took to the field as twelfth man late on. Despite having been in the field for the best part of three days, Rory Burns and Keaton Jennings batted out the day impressively.

As the weekend arrived so did the Bajan community, who took advantage of the cheap tickets on offer. They filled the Worrell, Weekes and Walcott stand, adding to the atmosphere alongside the hordes of England supporters hoping for the game to reach the fifth day.

Despite some early resistance from Rory Burns, who made 84, and the fact that both the ends at the Kensington Oval are named after Bajan fast bowling legends – Joel Garner and Malcolm Marshall – it was the lanky, part-time off-spinner Roston Chase, with a Test bowling average of 46, who was the arch-destroyer in England’s second innings, taking a staggering 8-60. It was the second-best bowling figures ever at the Kensington Oval, as England were dismissed for 246.

Related Story: West Indies announce 25-man group for England Test series
Not even the Barmy Army’s rendition of The Beatles tune “Help” could take the game into a final day, as West Indies won by the huge margin of 381 runs. It was left to my fellow broadcasting colleague, former England and Middlesex batsman Roland Butcher, to award the Player of the Match award to Jason Holder.

Imported sand and exotic dancers greeted the Barmy Army in the Barbadian party stand at the Kensington Oval, and they did their best to revel among the wreckage, but the New Year hangover belonged to England, who have a lot of work to do ahead of the second Test.