Andrew Strauss, the former England captain, has admitted his regret at not handling the maverick Kevin Pietersen better during his time as skipper.

Pietersen was an increasingly isolated figure in the later years of his England career, after fall-outs with the ECB, with one of his primary concerns surrounding the IPL. ECB’s policy at the time was to not have a separate window for the marquee franchise T20 tournament – something which Pietersen always campaigned for.

“I always had sympathy with KP over the IPL,” Strauss said on the Sky Cricket Podcast. “I understood what a big event it was, with all the best players playing there together, and huge amounts of money on the table as well.”

“It wasn’t that Kevin Pietersen was ahead of the curve; he was the curve.” – @Phil_Wisden.https://t.co/SVtAodSRiO

The window never materialised during Pietersen’s time, although interestingly, Strauss did introduce it once he became ECB’s director of cricket. “Long term my view was that we had to find a window for the IPL,” he said. “I told the ECB we couldn’t compete against each other as it is going to create massive issues within our team.

Related Story: Pietersen should ‘never have played for England’ after textgate, says Vaughan

“But I thought it was incredibly dangerous to allow players to miss Test cricket to play in the IPL. The message you’d be sending and the precedent you’d be setting is that the IPL is more important than Test cricket. I was saying to KP at the time, ‘listen, mate, this is the situation – you can’t opt in or out of international cricket. You’ve got obligations to England, and hopefully, there are gaps where you can play in the IPL as well’.”

Strauss now wishes he had handled Pietersen differently, allowed him more space. “I don’t think he would have been in the engine-room of the team in that sense,” said Strauss. “But I’ve always felt a good team environment embraces difference and finds a space for everyone. I think we did that for large periods of time but possibly through neglect, KP became increasingly isolated.

“Often KP wanted to be the guy who was slightly separate from the team. On any given day it didn’t feel like an issue but over time it became an issue.” 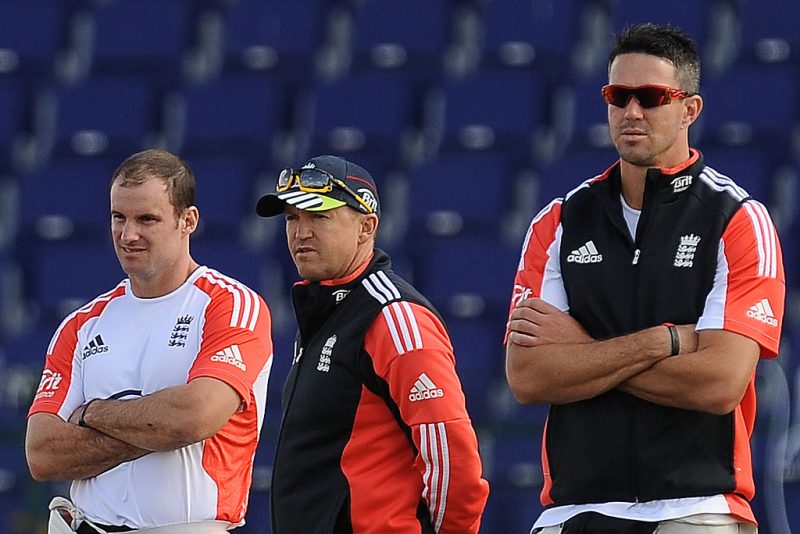 Things between Pietersen and Strauss deteriorated during the ‘text-gate’ scandal

Things came to a head during the ‘text-gate’ scandal in England’s 2012 Test tour of South Africa, where Pietersen sent text messages to South African players in which he allegedly insulted Strauss. He was dropped from the team after that, and though he returned to the set-up, his time with England ended after the 2013-14 Ashes.

“The worst thing you can do for players like KP is to straight-jacket them and say, ‘you have to abide by X, Y and Z. You can’t go and play in a flamboyant way, you have to grind it out like Jonathan Trott’.

“Effectively you’d be asking him to be someone he’s not, so you had to cut him some slack and allow him to be himself. At times, though, what worked for KP almost undermined what the team was trying to do. It felt like there were two completely separate agendas there, and that became a problem for me, the rest of the team and Andy Flower [the then head coach].