The ECB is reportedly set to spring a surprise by appointing Ed Smith as England’s new national selector.

The former Kent, Middlesex and England batsman, who has become a regular commentator on Test Match Special since his retirement in 2008, will replace James Whitaker as part of Andrew Strauss’s shake-up of the selection process, according to a report in The Times by Wisden Cricket Monthly columnist Elizabeth Ammon.

Angus Fraser and Mick Newell, the other selectors – who occupy director of cricket positions at Middlesex and Nottinghamshire respectively – are also due to leave their roles as part of the restructure, which demands that selectors no longer have ties to a particular county. 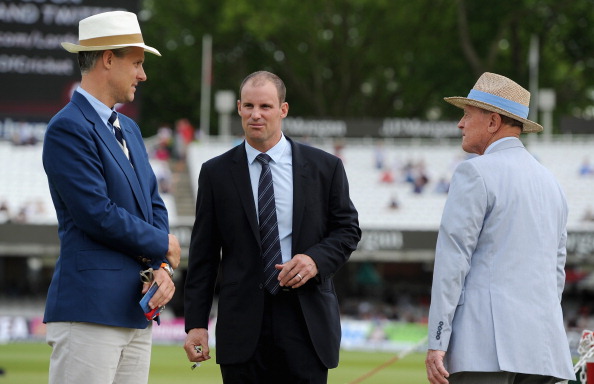 Smith with Strauss and Geoffrey Boycott in 2014

Andrew Strauss intends to create a network of 12 scouts who will report to Smith and a new full-time selector to be appointed by Smith directly. Trevor Bayliss, the England head coach, will remain as the selection panel’s third member. At present, Strauss himself sits in on selection meetings along with the team captain, though neither is officially a selector.

Smith, 40, who played three Tests in 2003 and 191 first-class matches overall, including as captain of Strauss’s old team Middlesex, is reportedly due to begin his new job in time for the first selection meeting of the summer on May 15, when the Test squad to take on Pakistan will be decided.

The news comes as the ECB considers radical changes to the structure of domestic cricket. A new working party, to be led by Leicestershire chief executive Wasim Khan, will soon meet to discuss options for the domestic season once the new-team T20 competition starts in 2020.

Among the issues it will consider is the introduction of an FA Cup-style 50-over competition as a knockout tournament involving the Minor Counties. It also looks likely that the system of promotion and relegation in Championship cricket will be replaced a conference system whereby three conferences of six teams play 10 matches each, with playoffs to decide the final standings. This, it is believed, will reduce the number of Championship games, give every team a chance of winning at the start of each season and reduce the need for short-term decision-making brought on by the threat of relegation or lure of promotion.