Seven decades on, Neil Harvey says he still feels a tinge of guilt for denying Don Bradman the four runs he needed to end his Test career with a magical batting average of 100.

Bradman, arguably the greatest batsman of all time, needed just four runs in his last innings to retire with the perfect statistic.

However, he was dismissed by Eric Hollies for a two-ball duck at The Oval in August 1948. Australia won the five-match series 4-0, but Bradman signed off with a batting average of 99.94. 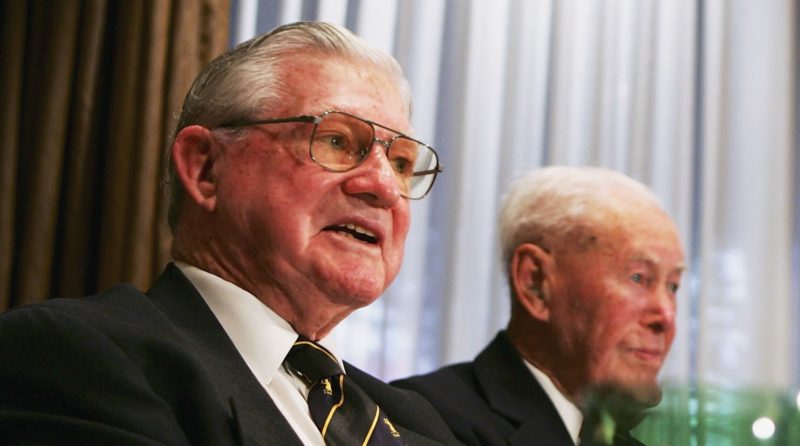 “If he would have scored those four runs instead of me, he’d have got there”

Harvey, the last surviving member of ‘The Invincibles’, scored Australia’s winning runs in the fourth Test of the series in Leeds. The left-hander walked into the middle with Bradman at the other end, unbeaten on 173. Harvey hit a boundary off the first ball he faced, taking the visitors to a seven-wicket victory.

“That four at Leeds makes me feel very guilty. It’s entirely my fault Bradman didn’t average 100 in Test cricket. If he would have scored those four runs instead of me, he’d have got there,” Harvey was quoted as saying by Sydney Morning Herald.

“I went in and Ken Cranston, a seam bowler from Lancashire, bowled this thing on my leg stump and I whacked it through mid-wicket for four. The public charging onto the ground and I can still remember Bradman yelling, ‘come on son, let’s get out of here’.”

Australia won the five-Test series 4-0 as Bradman signed off with a batting average of 99.94

Harvey, one of the Australian greats, said he was willing to take the blame for Bradman’s average falling short of the incredible three-figure mark. He added that no one knew back then that the Australian captain required four runs in his final innings to get to 100.

“Statistics were never mentioned back then; there was no television and no one in the press seemed to know. When the poor bloke was bowled that was it. He wasn’t going to get another chance because we dismissed England for 52 in their first innings.”