England off-spinner Moeen Ali, on an extended break from Test cricket since August, has insisted the sabbatical will help him prolong his career in the longest format.

With 181 wickets in 60 Tests at 36.59, Moeen is England’s fourth-highest wicket-taking spinner. He last played in the format in the first Ashes Test in Birmingham, where he returned a poor 3-172 in a 251-run loss for England.

After sitting out the remainder of the Ashes, Moeen announced he was taking a break from Test cricket, and made himself unavailable for selection for the tours of New Zealand, where England lost the Tests 1-0, and South Africa, which begins later this month.

There was criticism from some quarters over Moeen’s decision to not play the South Africa series, but the all-rounder defended his decision, saying returning to Test cricket at this stage “just felt too soon”.

“Representing England has always been a privilege and my decision to take a break from Test cricket at the end of the home summer was made to ensure that, hopefully, I can do it for a lot longer,” he wrote in his column for The Guardian.

“Last week there were conversations about whether I felt ready to return for the South Africa tour and naturally part of me was keen to get back out there. My record against them is pretty good, and as a team we have happy memories of winning there four years ago.

“But it just felt too soon. The past few years have been so full-on and the plan behind my break from Test cricket was to freshen up.”

Despite the break from Tests, Moeen has kept himself busy with other forms of cricket, including stints in the Mzansi Super League and the Abu Dhabi T10 League. Recently, he signed up for the Multan Sultans in the Pakistan Super League.

"Having lost my Test central contract aged 32, I still need to keep playing and earning for my family"

The off-spinner said the break was “liberating”, and reiterated that it was never about doing nothing and sitting at home. “The time away has felt quite liberating,” he wrote. “Since my international debut in 2014, the miles on the clock have probably crept up, and Test cricket is the level where the pressure and scrutiny are greatest. Combining it all had become a bit draining, and rushing back now might have seen nothing change in this regard.

“This time out was never going to be one just sat at home. Having lost my Test central contract aged 32, I still need to keep playing and earning for my family.” 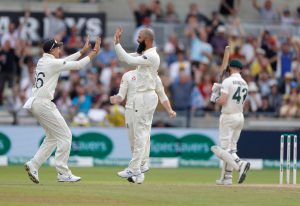 Moeen still harbours hope that he can get an opportunity to prove himself again when the limited-overs leg of England’s tour of South Africa begins.

“I am also hoping to be part of the England white-ball tour to South Africa before then, and it is another big year for the team with the T20 World Cup in Australia next October,” said Moeen. “Playing in white-ball tournaments before then can only help.”

England will play three ODIs and as many T20Is after the four-match Test series in South Africa, with the first Test beginning on Boxing Day at The Centurion.