One time England spin bowler Simon Kerrigan has signed for National Counties side Shropshire ahead of the 2020 season.

The 30-year-old left-arm spinner last played county cricket, on loan at Northamptonshire, in 2017. Having been released by his parent club Lancashire in 2018, Kerrigan played one game for the Northants 2nd XI this year, scoring 81 with the bat and taking 2-67 against Leicestershire 2nd XI.

The decline in the fortunes of Kerrigan’s career has been quite dramatic. As a 22-year-old, Kerrigan took 9-51 for Lancashire in a crucial County Championship win over Hampshire that was ultimately vital in his county’s eventual County Championship title win, their first since outright since 1934.

Following an outstanding season with the ball in 2013 – Kerrigan took 58 first-class wickets at an average of 21.98 – Kerrigan was called up for the final Ashes Test of the summer at The Oval. With England 3-0 up and the series already sealed, Kerrigan made his debut alongside Chris Woakes in a rain-affected draw. Kerrigan experienced somewhat of a baptism of fire with his eight overs going for 53 runs as Shane Watson in particular took the attack to the debutant. 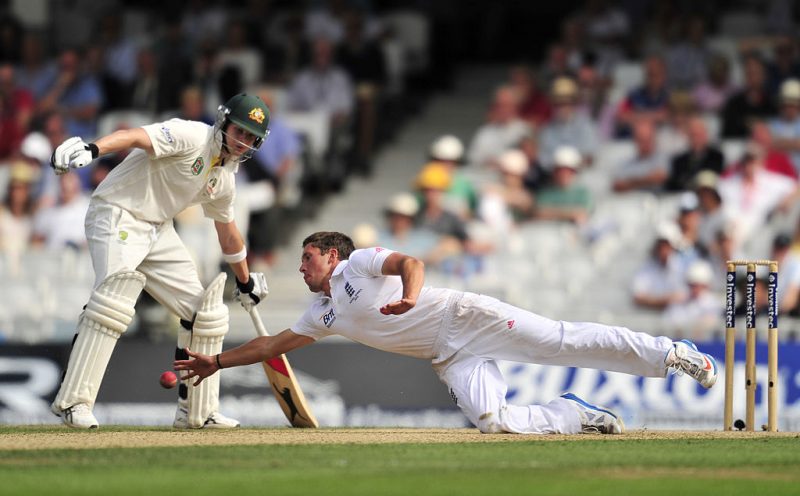 Simon Kerrigan played his only Test at The Oval against Australia

Kerrigan was subsequently left out of the touring party for that winter’s away Ashes series as Monty Panesar travelled as England’s second choice spinner behind Graeme Swann. Following Swann’s mid-series retirement, James Tredwell and Scott Borthwick were added to the squad as cover ahead of Kerrigan. He went on tour to Sri Lanka with the England Lions later that winter but that was the last time he represented an England team.

Following his first taste of international cricket, Kerrigan struggled to replicate the form that won him his initial call-up. In his next four seasons, he never again averaged under 30 with the ball even though he never averaged more than 40 either. With sturdy competition in the form of from Stephen Parry and an emerging Matt Parkinson in the spin-bowling department at Lancashire, first team appearances became harder to come by.

Commenting on his latest move, Kerrigan credited Karl Krikken – the former director of cricket at Shropshire and current member of the Lancashire coaching staff – for playing a part in his move. Kerrigan said: “He put me in touch with the club. And we quickly got things done and dusted. Since I left Lancashire, Minor Counties has definitely been something that’s interested me. It’s still an opportunity to play at a good standard of cricket and get a lot of overs in, compared to just playing club cricket at the weekend.”