The question the England selectors must answer is not just whether Jason Roy can crack Test cricket, but whether Test cricket might crack Jason Roy, writes Ben Gardner.

Cricket is a sport that throws up more dark irony than most, and Jason Roy found his comic misfortune doubling up in the final throes at Old Trafford.

While he might struggle to raise a chuckle at the black humour surrounding his second-innings 31 at Old Trafford, in each slice of sarcasm bestowed on him by the cricket gods was a lesson to take away as England attempt to rummage through the rubble of their Ashes campaign.

The first slice came the previous evening, when, having switched places in the batting order with Joe Denly so the Kent man could protect Roy from the new ball, England’s new No.4 found himself facing up inside the first over, before Denly had even faced a ball. If you could hardly construct a better symbol for how England’s plans have gone awry, it was also instructive as to Roy’s travails. The two men’s Test careers have been intertwined, but despite both having spent every match this summer nestled in England’s top four, this was the first time they had batted together, with Roy having always been among the first two wickets to fall until now. 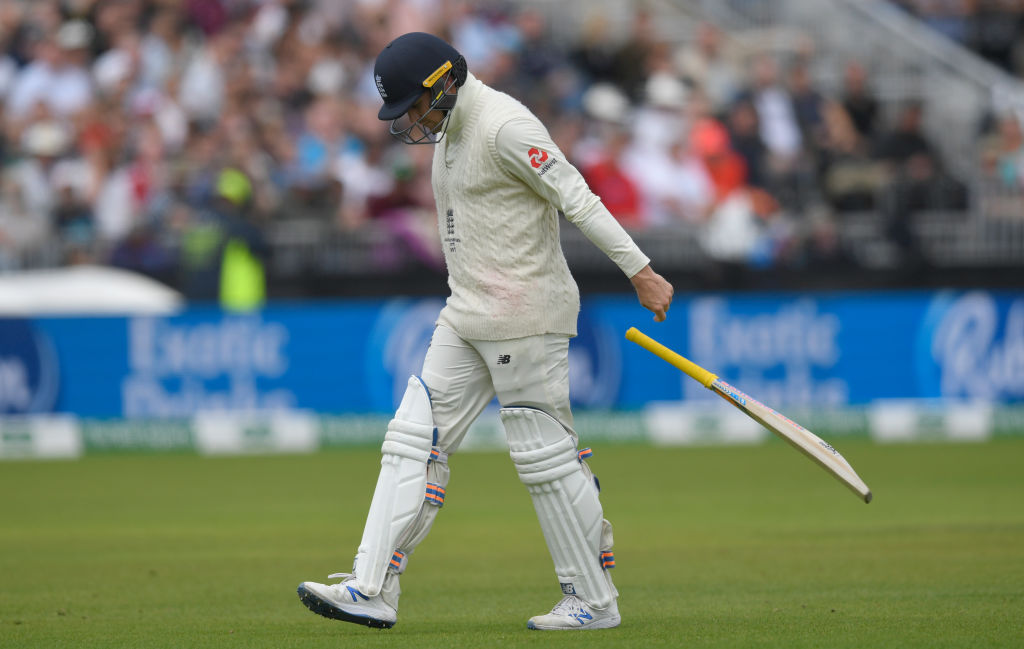 The second slice came after he was dismissed, when Roy lost control of his bat as he thumped it into his pads in frustration. While the wags on Twitter were quick to point out it wasn’t the first time Roy has got into trouble trying to hit something too hard in Test cricket, it was also revealing of how much the ODI star does value success in the format, and in any case, Roy’s attacking approach wasn’t his downfall here.

There might be no tougher job in the world than facing the new ball on these shores, and it’s tough to think of a single player who has succeeded regularly by hitting out up top

It is telling that his two highest scores of the series have now come in attempted rearguards. A player picked to take the game to the opposition has found conditions totally unsuited to that method, and the situation dictating circumspection rather than explosion. While in his 28 at Edgbaston he was bowled attempting a wild dance and slog, here, after 66 balls of caution having come into bat in the first over of the innings, he was undone not by his aggression but by his technique and a good piece of bowling, Pat Cummins swindling one between bat and pad as Roy attempted to defend.

Roy doubling over at even a hint of inward movement has become a common sight this series, but in many ways, his performances at Old Trafford offered the most compelling evidence yet that Roy has what it takes to make it as a Test cricketer. It’s faint praise, but this was the first time that he had faced 100 balls across both innings in a Test match, and while the flaw in his technique is worrying, he would hardly be the first batsman to find something to work on as he embarks on a Test career. It might be that all it takes is a bit of tinkering and tightening, and Roy could be a successful No.4.

"Bowling at Steve Smith in his form is difficult, and you have to make sure you take all your chances."

Joe Root on the point of difference this #Ashes series ?https://t.co/cYuMjU9UIo

The theoretical appeal of the swashbuckling opener has always been based more on rose tint and wishful thinking than hard evidence. Among all the hopeful references to Sehwag and Warner was nary a recognition that the two have made one Test hundred between them in England, while after Warner’s horror-show of a series, neither averages 30 here either.

Related Story: Kevin Pietersen picks out banned Pakistan pacer as the best he ever faced

There might be no tougher job in the world than facing the new ball on these shores, and it’s tough to think of a single player who has succeeded regularly by hitting out up top. Really, it was always likely Roy would have to adapt his natural game, and his innings, while still brief in the grand scheme, suggested he has the mentality and the inclination to be able to.

The question, however, is if Roy moulding himself into a Test second-drop is what’s best for England and for the man himself. If he is to become more attuned to the challenges of Test cricket, and develops the attributes required to conquer it, so the very reason he was called up in the first case becomes less compelling. While there might be occasions when he is able to get set and then show of his range, the difficulty of Test batting and the quality of Test bowling worldwide suggests those opportunities will be few and far between. If he is to succeed, it will surely only be honing his natural instincts, and even if he manages that, what will have been accomplished?

"They are like for like in that they are both mammals and seam bowlers, but Overton is a lumbering Clydesdale; Starc is a Pegasus."@ajarrodkimber examines the differences between the sides that make Australia deserved Ashes winners.#Asheshttps://t.co/5rTnXYeaJ9

In Ollie Pope, a 21-year-old with two double tons and a first-class average of 60, England surely have a middle-order candidate worthy of a lengthy stretch, and even if they think Roy is the more likely of the two to succeed, the potential risks must be weighed up too.

For all the surety of Roy’s strokes in one-day cricket and for all the swagger conveyed in his Surrey strut, Roy is a cricketer and a person not immune to bursts of self-doubt, and more reliant on form than most. After a run of poor scores at the start of 2016, he came close to jacking it all in.

Related Story: ‘I still feel like I can’ – Jason Roy determined to succeed in Test cricket

“I can’t remember exactly what happened,” he told Wisden Cricket Monthly in early 2018. “I just got myself into a pretty horrible position and ended up actually getting depressed. I had to deal with that, which was a very big learning curve for me. I’ll be honest. I wanted to pack up my kit and quit.”

While he says himself he has become better at coping with failure since, England should be wary of exposing a player who depends on confidence to a naturally self-esteem-shrinking format, and with a T20 World Cup just over a year away, they can ill-afford risking the inhibition of one of their most destructive white-ball batsman. When deciding whether to persist with their new No.4, the question they must answer is not just whether Jason Roy can crack Test cricket, but whether Test cricket might crack Jason Roy.