Two Tests into the 2019 Ashes series, Steve Smith has dominated headlines and discussions. Jarrod Kimber looks back at his dramatic sequence of events thus far.

More than a year before the latest Ashes contest, Steve Smith was identified as one of the three guilty culprits of the the ball-tampering scandal at Newlands, which engulfed Australian cricket in 2018. Smith cried, people poked fun at him, and Cricket Australia handed him a 12-month ban. Australians were worried about their national image, while English minds wandered towards the negative impact it may have on Australia and one of the world’s greatest batsmen ahead of their next clash against the old enemy. If Smith was anxious about his Test-match comeback ahead of Edgbaston, it’s safe to say he didn’t show it.

When Smith resurfaced in Australia attire at the World Cup, he was met with a chorus of boos. India captain Virat Kohli, who tried to quieten the crowd when India played Australia, had his back, describing the reaction as “unacceptable”. “He’s just playing cricket,” he said. “I felt bad because if I was in a position where something had happened with me, and I had apologised, accepted it and I came back and still I would get booed, I wouldn’t like it.”

Later, England captain Eoin Morgan refused to offer advice as to how the fans should react to the returning batsman, but acknowledged that there would be more booing to come during the Ashes. 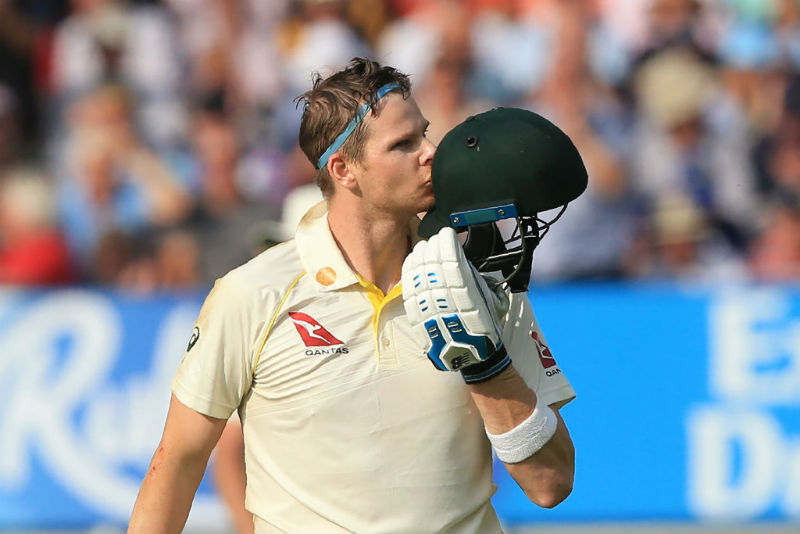 Three clouds hung over Smith’s Test return: how he would  deal with 1) his comeback on an emotional level. 2) Edgbaston’s raucous atmosphere. And 3) the seamer-friendly wickets on British soil. Day one it was green, cloudy and noisy, and Australia floundered. At 122-8, they were starved of inspiration, until the comeback kid got in on the act.

For the first time in over a year, Australia’s limp batting line-up was transformed with the introduction of the world’s premier Test batsman. Smith stood tall on his return, ignored the boo-boys, and seemed to master a pitch that others were perturbed by. He contributed more than 50 per cent of Australia’s runs and ruined England’s dream day. The man was back.

How long will it be before Steve Smith’s given leadership responsibilities again? People observed on the third day of the first Test that Smith was ushering fielders into position. He’d been doing it the day before – David Warner too. With Smith banned from leadership until March next year, and Warner for life, this irked fans on social media.

Smith then appeared to bring himself on to bowl, with some questioning how the ICC could allow this. But his leadership ban – like his overall suspension – are Cricket Australia (CA) bans, so CA would have to call Smith in for obvious backseat captaincy, but he’s just a senior player making a few calls, right?

These minor observations did prove, however, just how much scrutiny and attention is on Smith right now. Later in the day, he walked out to bat with Australia three wickets down and still in the negative.

Smith piled on the runs, making a valiant 142 before Australia declared on 487-7. They’d go on to win the game, after twice being in losing positions when the former captain entered the crease. It took him one Test to make himself indispensable again.

Steve Smith has been ruled out of the remainder of the second Test 👇https://t.co/cCQE66afCX

According to England captain Joe Root, the host’s plan for Lord’s was to ignore Smith’s twitches and grunts, and unleash speedy debutant Jofra Archer to unsettle him, while incoming left-arm spinner Jack Leach represented the closest thing Smith had to a weakness. After the pre-Test press conferences, the narrative appeared to infer it was 11 Englishmen versus Smith.

Australia opted to bowl, with England recovering after a decent start by the tourists. So Smith bowled again. This time it at least looked like it was Tim Paine’s idea.

Only 24.1 overs were bowled, with Smith playing a part, still there when the rain brought a premature end to proceedings. His ‘kid with a light sabre leaves’ went viral online. He’s been doing them for years, but people are paying more attention to them now.

Figured out how @stevesmith49 is having so much success… #Ashes #Maytheforcebewithyou pic.twitter.com/CC208idzP9

Smith picked up the broken pieces of Australia’s batting once more, carrying them towards a good total. Then Archer bowled THAT spell. He hit Smith, twice, with the second one forcing him off the field against his will. After passing CA’s medical tests, he returned at the fall of the next wicket – a move that drew criticism from some quarters – informing coach Justin Langer that he can’t get his name on the Honours Board from the changing room or hospital bed.

If not concussed then surely shaken, from hereon he batted like a man who was in need of a lie-down. At 92, he departed after leaving a ball that was castling into middle. He walked before waiting for a decision, but was convinced to review by non-striker Pat Cummins. From a medical standpoint, his dismissal looked a blessing in disguise.

After avoiding a fractured arm and then passing the concussion tests, there was simply no stopping Steve Smith from returning to the crease! #Ashes pic.twitter.com/0WlnZX0ZJR

Smith became the first player substituted out for concussion during an international match, while his replacement, Marnus Labuschagne, played the innings that drew Australia the Test. Yet Smith remained a chief theme of the post-match chat. Will he recover in time for Headingley? Is it England’s game to lose if he isn’t?

He may not feature at Headingley and Australia may not retain the little urn, but this, arguably, is already destined to be ‘Steve Smith’s Ashes’.