Freddie Wilde identifies the trends that could shape the 2018 T20 Blast season.

Flat pitches and very aggressive batting in the 2017 T20 Blast contributed to an average run-rate of 8.61 runs per over (RPO) – the fourth highest of all time in a T20 competition – with batsmen scoring faster in all phases of the innings. Although the average run-rate in the One-Day Cup this year has fallen from 5.96 RPO to 5.81 RPO, suggesting that pitches around the country aren’t quite as flat – expect batsmen to continue to attack in a league full of emboldened hitters exploiting small boundaries and some inexperienced bowlers. 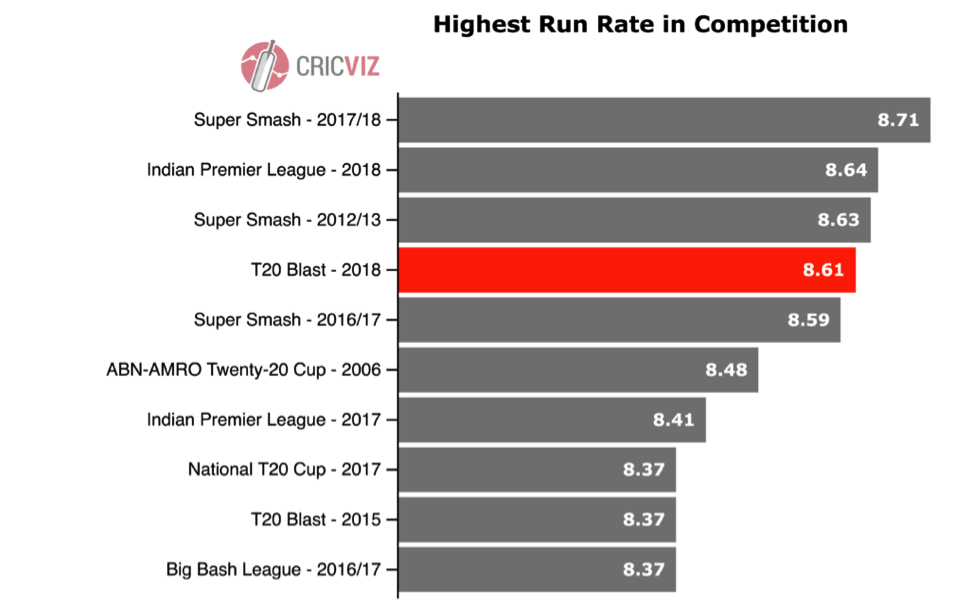 The large majority of teams have responded to the record run-rates of 2017 by bolstering their bowling attacks. Just 10 of the 37 confirmed overseas signings for the season are specialist batsmen, compared to 16 last season; and 20 are frontline bowlers who will be expected to bowl four overs per match, compared to 16 last season. Ten of the world’s top 21 T20 bowlers since the start of 2017 will appear in the T20 Blast this season. Whether these high quality imports are enough to claw back lost ground for the bowling teams remains to be seen. 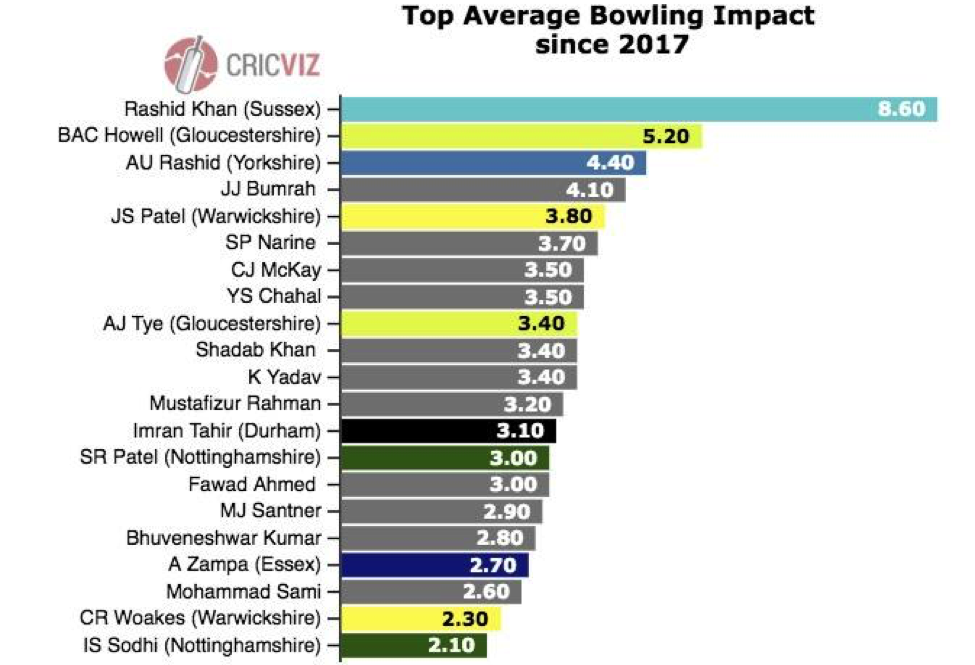 Although the 2017 run-fest was driven by higher run-rates in all phases of the innings the most significant shift occurred in the Powerplay where run rates rose by 8.47%. The principal reason for this was an increase in attacking intent from 60% to 63% as teams sought to maximise the benefits of the field restrictions. One of the most effective ways to do this is to utilise a pinch-hitter – promoting a dispensable lower-order hitter to the top of the order – which a number of teams did last season. This is a tactic which could become more prevalent this year with plenty of teams possessing players capable of fulfilling the role: namely non-frontline batsmen who score at a run-rate above 8 runs per over. Ideally pinch-hitters are players who are particularly adept at hitting up and over the infield. 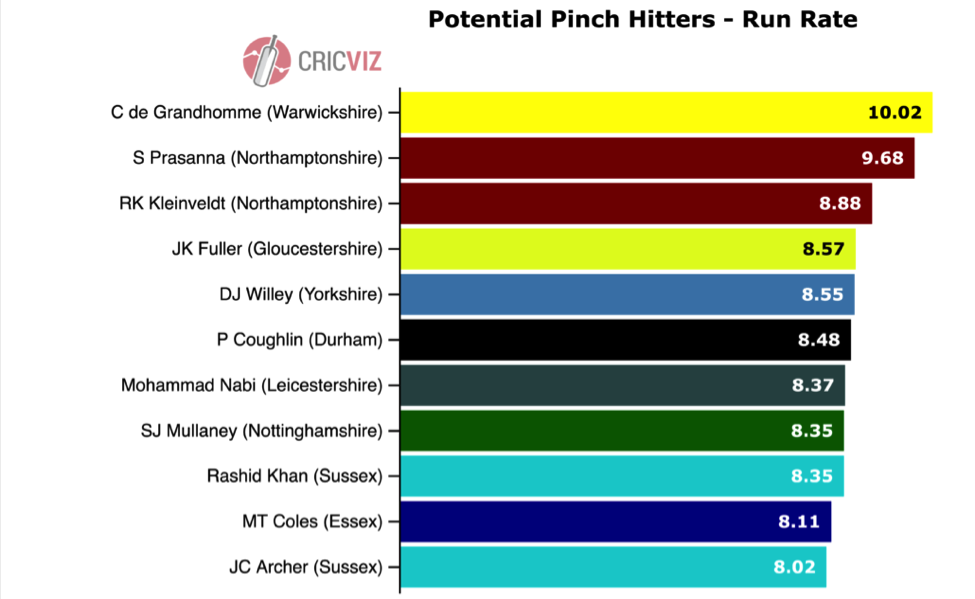 If batting teams continue to attack hard in the Powerplay then expect to see more spinners deployed in the phase. Last season spinners bowled 17% of overs in the Powerplay – a big increase on the previous two seasons and the highest proportion ever in the T20 Blast. The tactic succeeded in stemming the flow of runs with spinners conceding 8.13 RPO in the phase compared to 8.79 RPO for pace bowlers. Look out too for an increased presence of spin in the death overs as well – something which hasn’t yet been apparent in the T20 Blast but experienced a resurgence in the IPL this year with spinners becoming more adept at stifling attacking batsmen. 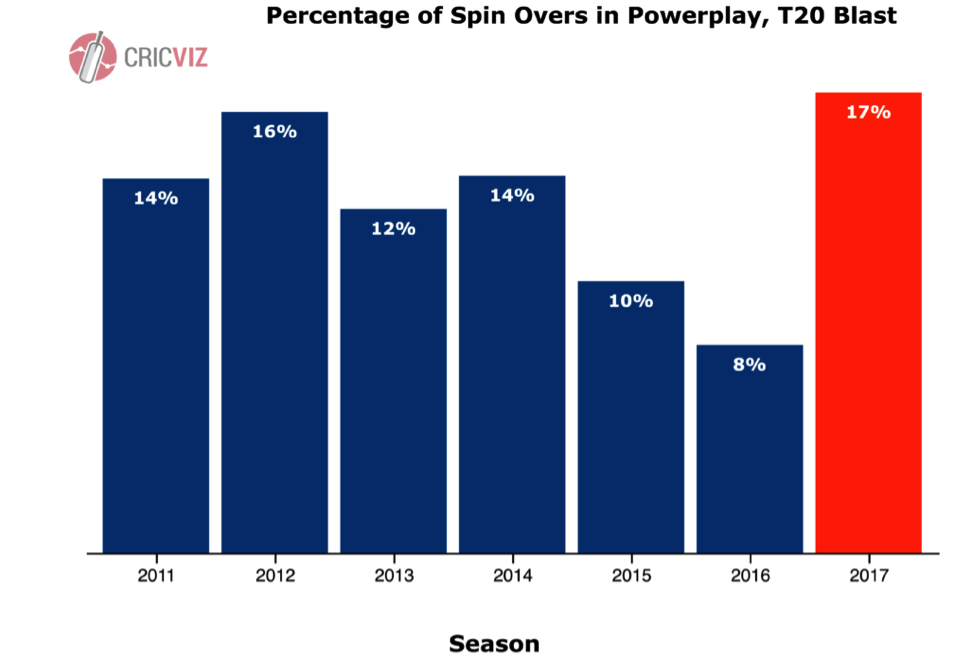 Pace-spin is the new right-left

One-day cricket has obsessed over right-hand, left-hand batting combinations for decades but as playing to match-ups becomes increasingly common the combination batting teams should pursue is pace-strong, spin-strong combinations: that is pairing up two batsmen with contrasting strengths to complicate tactics for the bowling team. The most prominent example of this tactic has been at Kolkata Knight Riders in the IPL where Sunil Narine’s strength against spin and Chris Lynn’s strength against pace have caused major strategic problems for fielding captains. If spin does become more common in the Powerplay then pace-spin strong batting combinations will offer an effective counter-tactic. 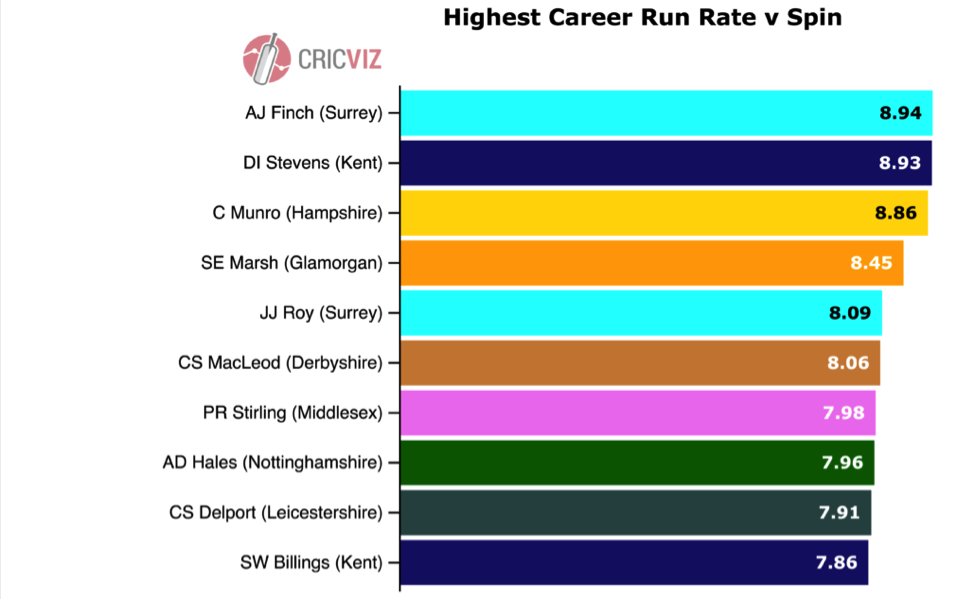 In the 2017 T20 Blast only 41% of chasing teams won – the third lowest proportion of chasing wins in 12 seasons of English T20 cricket. The principal reason for the resurgence of defending teams was their aggression when batting. In the 2017 T20 Blast teams batting first – perhaps emboldened by flat pitches – attacked 69% of deliveries. That was the highest proportion in any English T20 season and teams that won when batting first attacked 71% of deliveries – also the highest proportion in any English T20 season. In particular winning first-innings teams showed significant intent in the Powerplay – attacking 64% of deliveries in the first six overs. 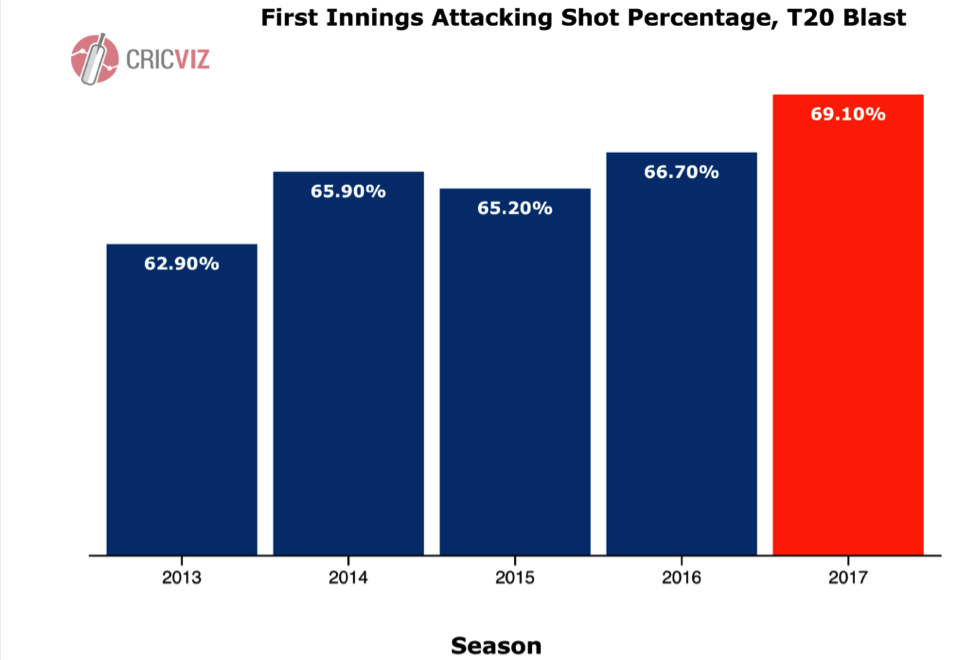 The result of this positive intent was that the average first innings score rose to 173 – the highest in any season of English T20 – which laid the foundation for 59% of matches to be won by the team batting first. The preference for toss winners to chase can be expected to continue with global averages suggesting a slight advantage is afforded to teams who field first; this provides teams who dare to attack when put in a chance to turn a preference of the opposition into a strength of their own.

Freddie Wilde is an analyst at CricViz, the cricket intelligence specialists

Analysis: How the England India T20 series will be decided