It was a thrilling day of flimsy batting in the face of some hostile bowling. Patrick Noone analyses the performances of the pacemen from either side on day two in St Lucia.

Batting collapses and hostile fast bowling; two of the most compelling spectacles to watch in cricket. Both keep you transfixed to every ball, expectantly waiting for the next wicket; the former in morbid fascination, the latter in awed admiration.

On day two in St Lucia, the fans inside the Daren Sammy Stadium were spoilt; treated to both a batting collapse and a hostile spell of fast bowling from both sides. First it was a Shannon Gabriel-inspired West Indies who skittled England for 277, the visitors losing 6-46 having been 231-4 overnight, before Mark Wood announced his return to the Test arena with a fearsome spell of quick bowling that helped to reduce West Indies to 79-6 from the relative serenity of 57-0.

It was Kemar Roach who will likely grab most of the headlines after picking up another four wickets, but it was Gabriel who got the early breakthrough, bowling Jos Buttler with his seventh ball of the day for 67 to end England’s highest partnership of the series.

Buttler is not often beaten for pace. It was only the second time in his Test career that he’d been bowled by a fast bowler. The first, by Mitchell Starc back in 2015 was from a ball that clocked 141kph; today, his defences were breached by a delivery that was a fraction below 144kph.

Gabriel’s average speed across his five-over spell was 142kph, as quick as he’s bowled all series and, though Buttler was his only victim, the hostility with which he bowled to England’s other batsmen made for essential viewing. His ongoing feud with Ben Stokes continued from Antigua and bubbled along with neither competitor giving the other an inch.

Stokes faced ten balls from Gabriel during that spell on Sunday morning and only two of them were fuller than a good length. He was only able to score three runs and was repeatedly peppered by West Indies’ fired up quick. 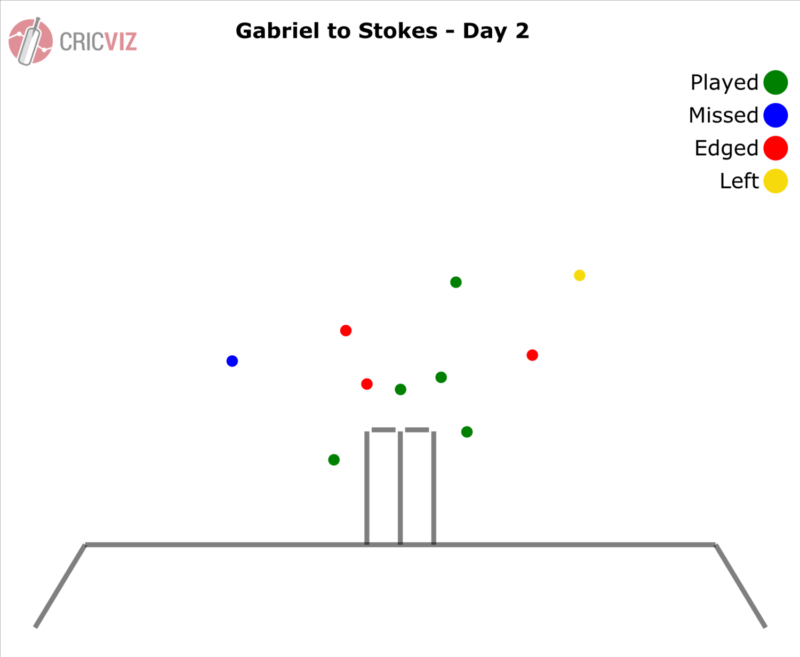 In all, Gabriel conceded just five runs from his five overs, drawing a false shot with 23% of the balls he bowled. Put simply, he probably deserved more than one wicket, but his contribution cannot be overstated and Roach was able to benefit from the other end as he cleaned up the innings.

Before this match, Wood had not played a Test for nine months. He hadn’t bowled in a first-class match since turning out for England Lions in November, yet the pace, rhythm and aggression he showed from the very first ball he bowled belied his lack of match practice.

Wood’s career has been a curious one. It’s nearly four years since he made his Test debut, yet injuries and lack of form have meant that this is just his 13th match in the longest form. Too often he has been talked about in terms of what England aren’t rather than what he is. Last winter’s Ashes defeat was punctuated with laments over England’s inability to produce bowlers of express pace. Come the ODI series that followed those Tests, Wood bounced out David Warner and it only added to the narrative that he should have played a part in the ill-fated tour Down Under.

For England’s first Test back home against Pakistan, Wood was straight into the XI but took just two wickets in the match and was not seen in England whites until now. The first thing to notice about Wood’s spell was that his short, slightly jarring run up had been lengthened by a few paces and appeared smoother. The second thing that was evident, perhaps as a result of the first, was that Wood was bowling fast, seriously fast – the third fastest that any England bowler has bowled in a Test innings since such data started being recorded in 2005. 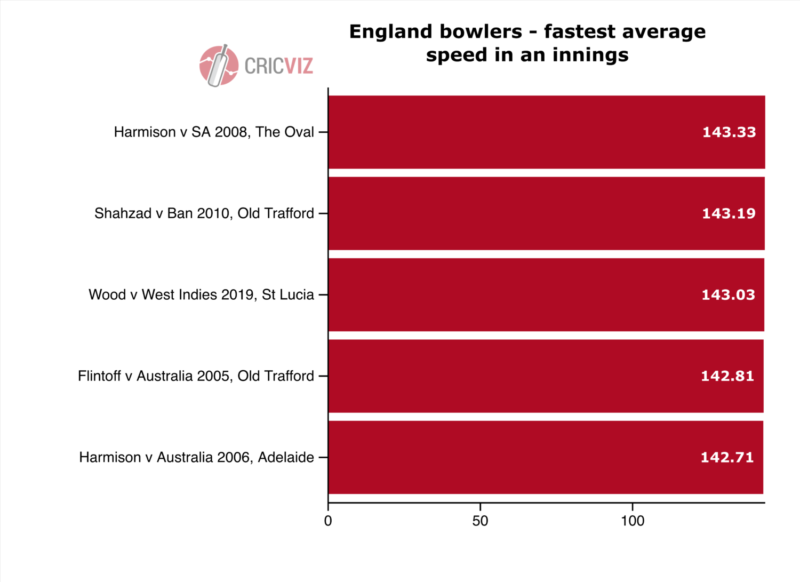 Renowned as a bowler who can consistently maintain a speed above 140kph, the reality has in fact been that Wood has generally hovered around the 135kph mark. Until today.

Wood took two wickets in his first over, did not concede a run until his 13th ball and didn’t drop below 140kph until his 34th. This was the Mark Wood that people were calling for when they talked of England’s lack of pace during the Ashes; quick, hostile and taking wickets. 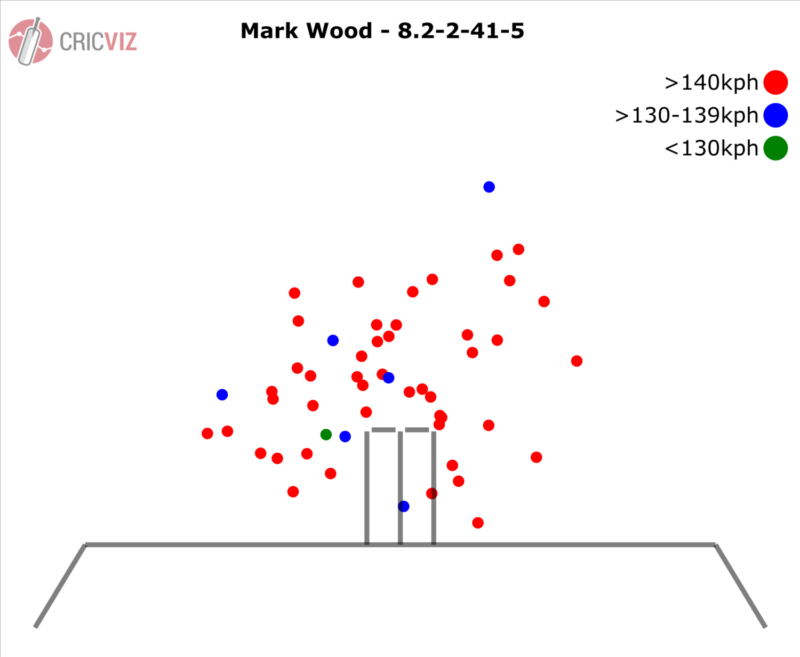 For the second time in the day, wickets were tumbling and a fast bowler was cranking it up. It was a captivating spell on a thrilling day of Test cricket; one where every ball felt unmissable. The pure theatre of a fast bowler steaming in, causing batsmen to hop around or nick it to a hungry slip cordon is, particularly in the Caribbean, a spectacle that is as alluring in the modern era as any other.

Patrick Noone is an analyst at CricViz.