Patrick Noone delves into CricViz stats to reveal how Melbourne Renegades stole the honours in the eighth edition of the Big Bash League.

It was a thrilling conclusion to a long and eventful story. The 2018/19 Big Bash League culminated at Marvel Stadium on Sunday with Melbourne Renegades crowned champions for the first time.

The win was as improbable as it was dramatic. Crosstown rivals Melbourne Stars were 93-0 in pursuit of 146, before a remarkable collapse left them 112-7 just 30 balls later. The game had swung in the blink of an eye and the Renegades went on to claim a 13-run victory. The progression of the WinViz percentages shows just how great a turnaround it was.

Before even getting into the ins and outs of how the Renegades performed with bat or ball, it’s necessary to point out their extraordinary run of luck with the toss. Of the 16 matches they played, the Renegades won the toss on 11 occasions, choosing to field first in ten of those 11 matches.

The only time they opted to bat first was when they faced Sydney Thunder at Marvel Stadium. That was a tactical decision borne out by the fact that the Thunder had a preference for batting first, having won four of their six completed matches in BBL08 when setting a target. The decision also served to nullify the threat of the Thunder’s spin attack which, on a pitch that was slow and low throughout the tournament, would likely have been more dangerous during a run chase.

On the whole, though, the Renegades saw themselves as a team more comfortable chasing, owing to the strength of their bowling unit that routinely restricted teams to manageable totals.

The Renegades benefitted from having a settled bowling attack throughout the majority of the competition; Kane Richardson’s omission from the Australia ODI squad meant that Usman Shinwari’s departure to play for Pakistan was the only disruption they suffered due to international call-ups. And the Renegades had a more than adequate replacement in Harry Gurney.

They only used ten bowlers in the tournament – the joint lowest amount alongside Hobart Hurricanes – and there was hardly a weak link among them. Tom Cooper, with his occasional off-spin, was the only bowler of the ten to go through the tournament wicketless, though his three overs went for just 18 runs. In all, only Joe Mennie, who featured in just two matches, conceded more than 7.70 runs per over. 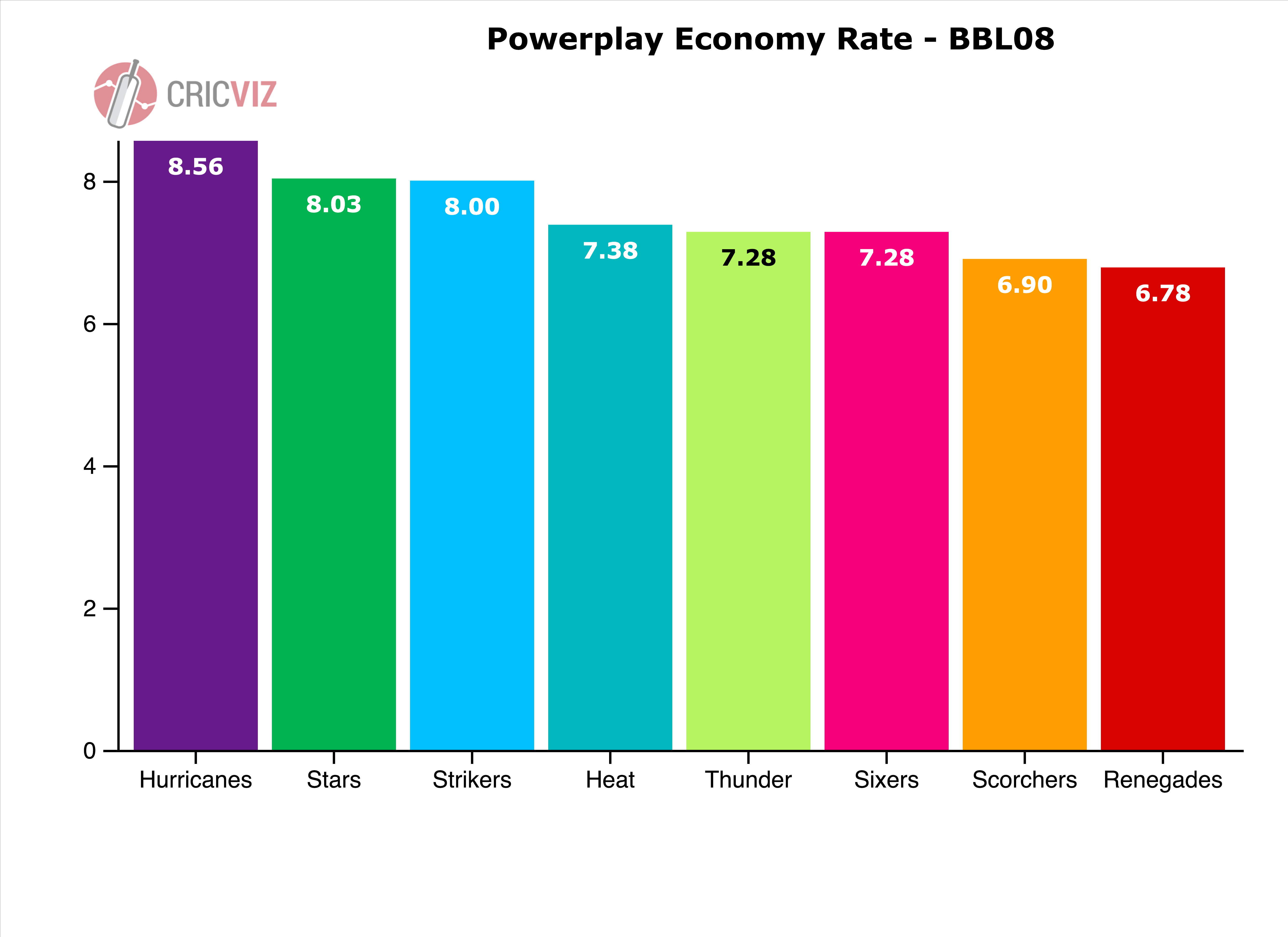 The Renegades’ attack had depth and variety: right-arm seam from Richardson, Chris Tremain, Jack Wildermuth and Dan Christian, left-arm seam from either Shinwari or Gurney, off-spin from Mohammad Nabi and leg-spin from Cameron Boyce.

They were flexible and consistently played to the conditions they found themselves in; for example, choosing to open the bowling with the off-spin of either Nabi or Cooper in four of their seven matches at Marvel Stadium. On two of the three occasions where seam opened from both ends, against the Hurricanes and the Thunder, Richardson picked up wickets in his first over and the Renegades adapted their strategy accordingly.

At the other end of the innings, the Renegades were just as effective. Only six bowlers to bowl 50 balls or more during the last five overs conceded runs at less than 8.00 runs per over – and three of them were Renegades players. 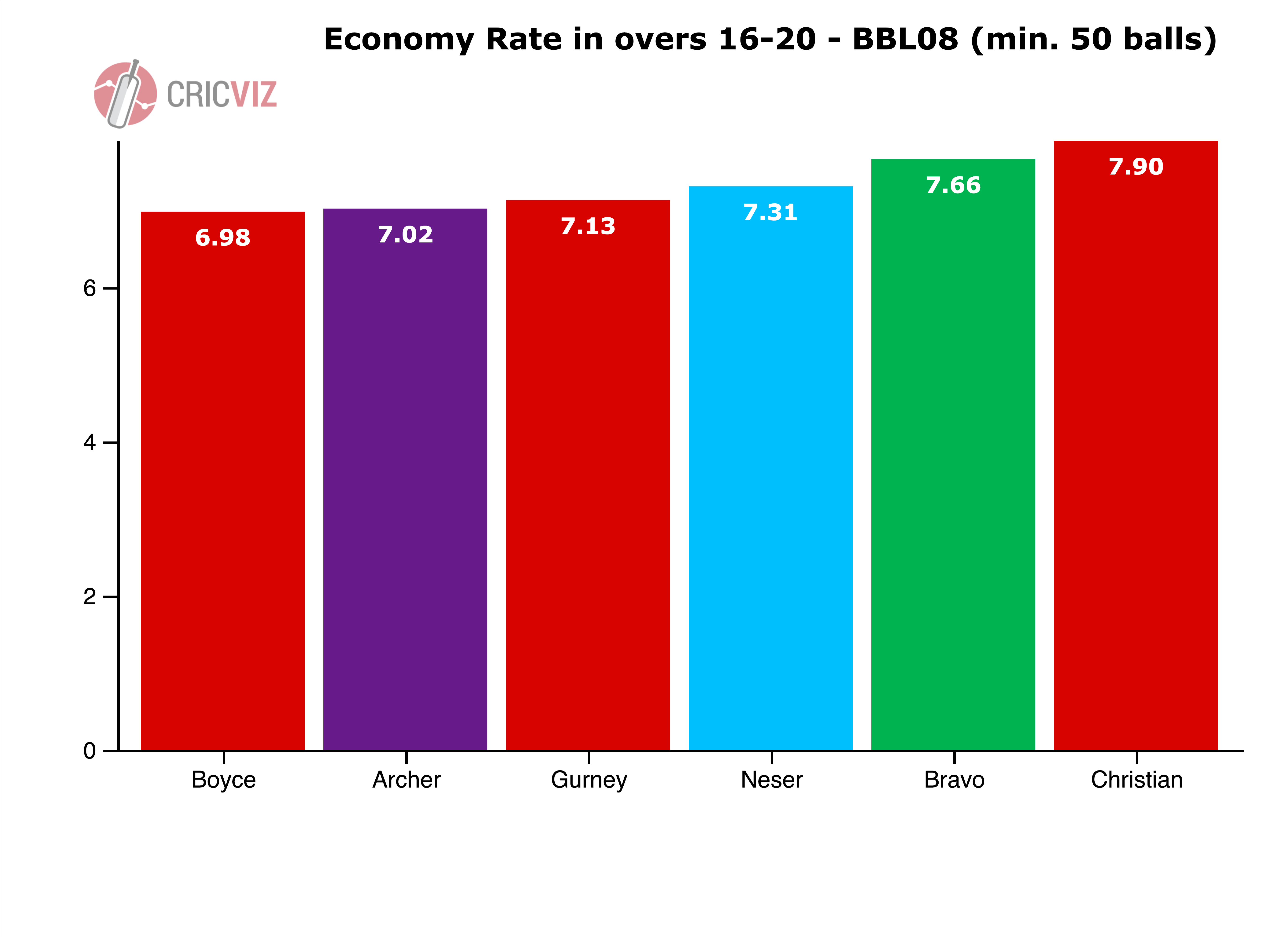 Boyce’s return is particularly remarkable – only two spinners in BBL history have registered a better economy rate than him in the death overs: Brad Hogg in BBL03 (5.30) and Adil Rashid in BBL05 (6.00).

Meanwhile, Gurney conceded a boundary off just 6.66 per cent of the balls he bowled in that phase – a figure that has only been bettered by Nathan Rimmington (5.88 per cent) and Gurinder Sandhu (5.00 per cent), both in BBL03.

The only other Renegades bowler to bowl during that phase of the innings was Richardson who went at 9.50 runs per over, but that was mitigated by the ten wickets he took at the death, making him one of only five bowlers to reach double figures in the last five overs of the innings. 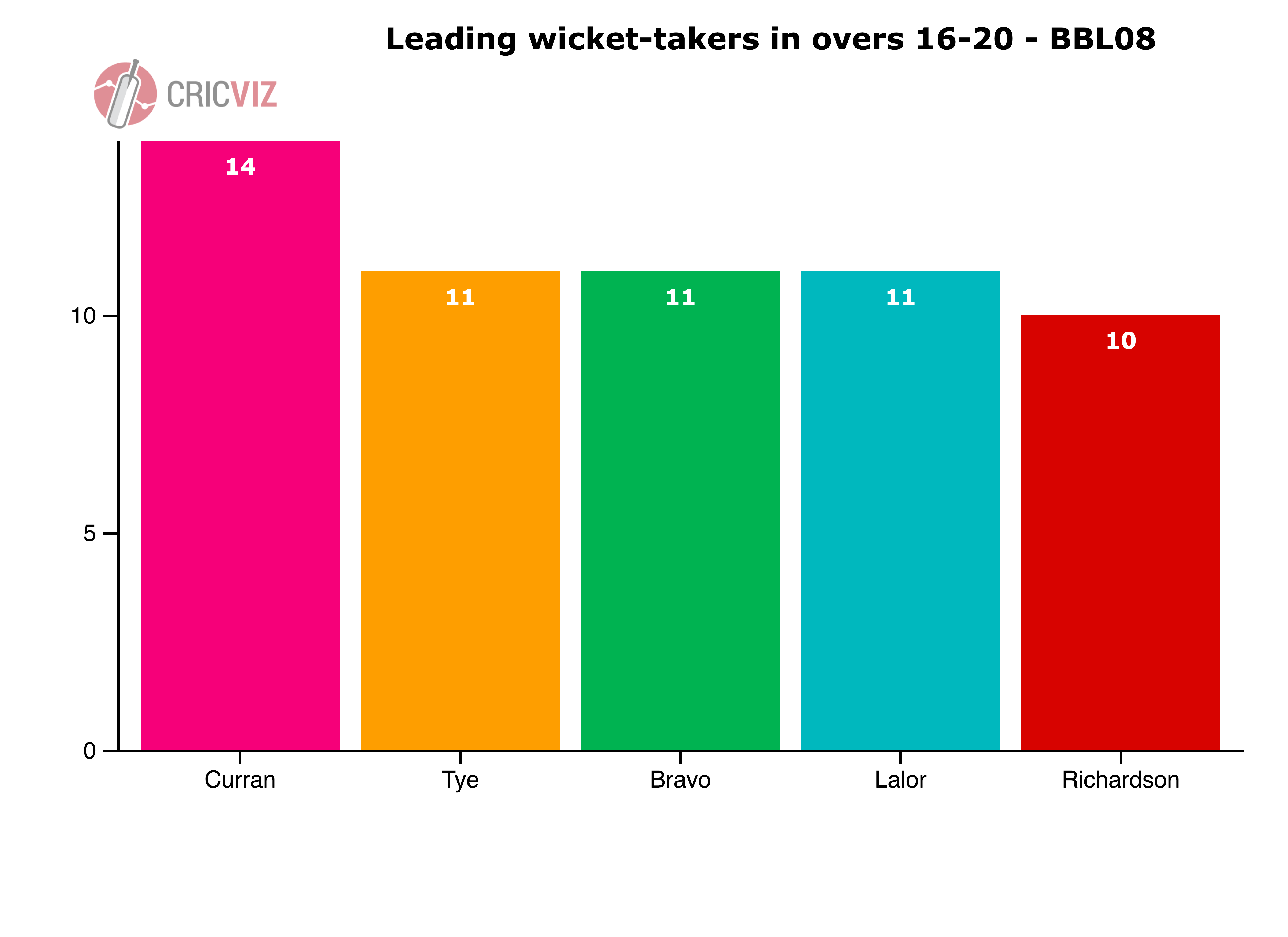 It is a statistic that has become common knowledge since the Renegades progressed to the finals that the franchise only registered three individual 50+ scores throughout the whole competition. That kind of return can be generously described as an unlikely blueprint for success, but the Renegades made it work.

Their highest score in the whole competition was the 184 they chased in the semi-final against Sydney Sixers, and that was the only time they passed 180 throughout BBL08. It’s an obvious thing to say, but one of the advantages to having such a strong bowling attack is that you simply don’t need to score as many runs to win matches.

In fact, during the home and away stage of this year’s BBL, the Renegades scored fewer runs and lost more wickets than every other side, yet finished second in the ladder and went on to win the whole competition. 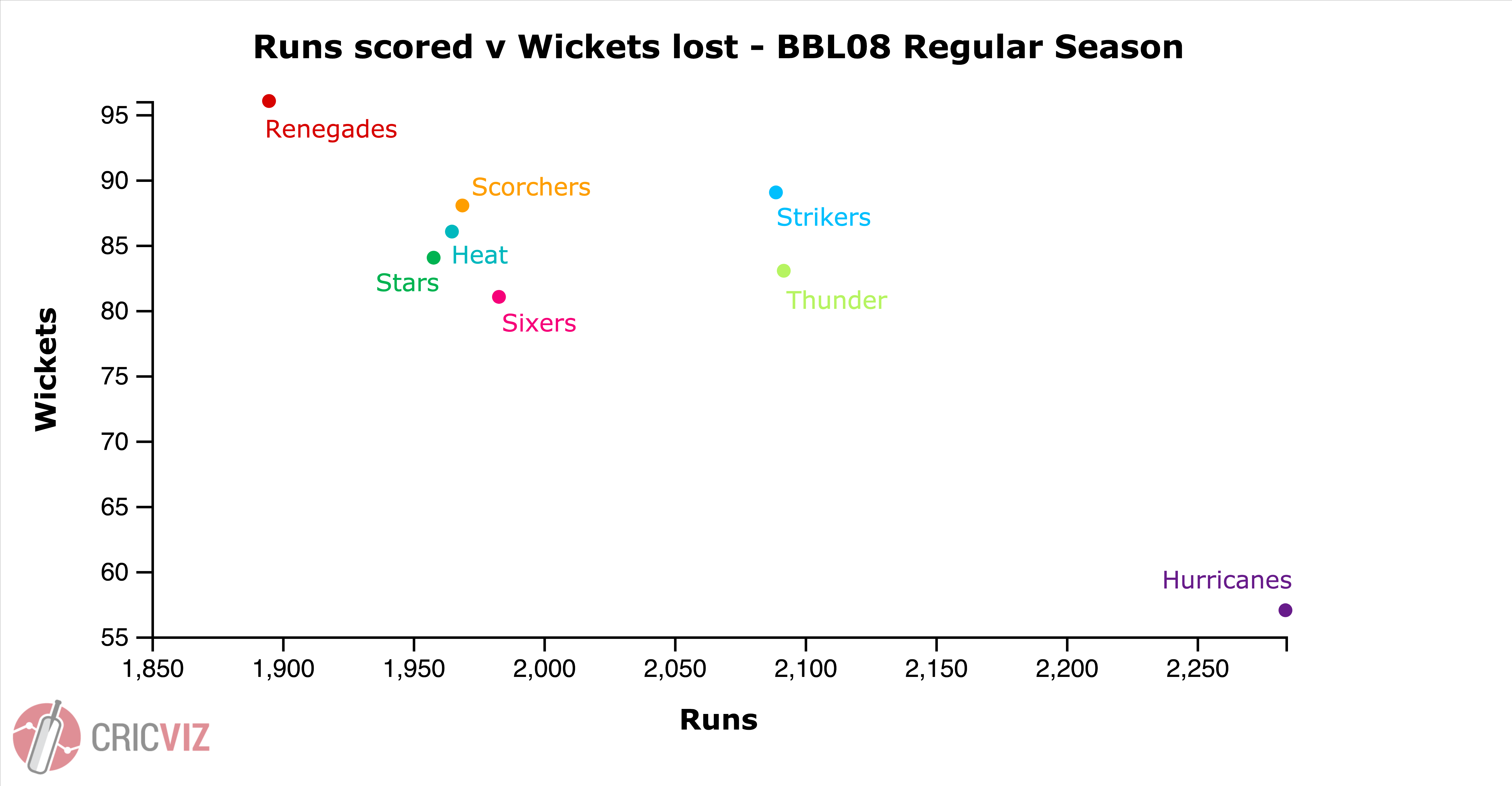 The Renegades’ highest score when batting first was just 157; this was not a team that was setting imposing targets for other teams to chase down, though it should be noted that this was, at least in part, a result of the conditions at Marvel Stadium.

Of the major BBL grounds that are still used regularly, only Sydney Thunder’s Spotless Stadium has a lower average run rate than the 7.77 seen at Marvel. This year, that figure was even lower at 6.90, making it the slowest scoring ground in BBL08, while Kardinia Park in Geelong, the Renegades’ home for two matches, was the next in the list at 7.28.

Continually, it was a case of different batsmen stepping up when required and doing just enough to keep the Renegades in the game and get them over the line. Sam Harper was the most consistent Renegades batsman, passing 30 in seven of his 16 innings and finishing the season as his side’s leading scorer with 341 runs.

Before this season, the 22-year-old had played four games for Melbourne Stars in BBL06, scoring just ten runs before making the switch across town to the Renegades. Given that Aaron Finch and Marcus Harris missed much of the season owing to international commitments, the Renegades needed someone in the top three to step up in their absence, and Harper proved to be the man to do so. Only Sydney Sixers’ Josh Philippe could better Harper’s Powerplay run rate of 9.18. 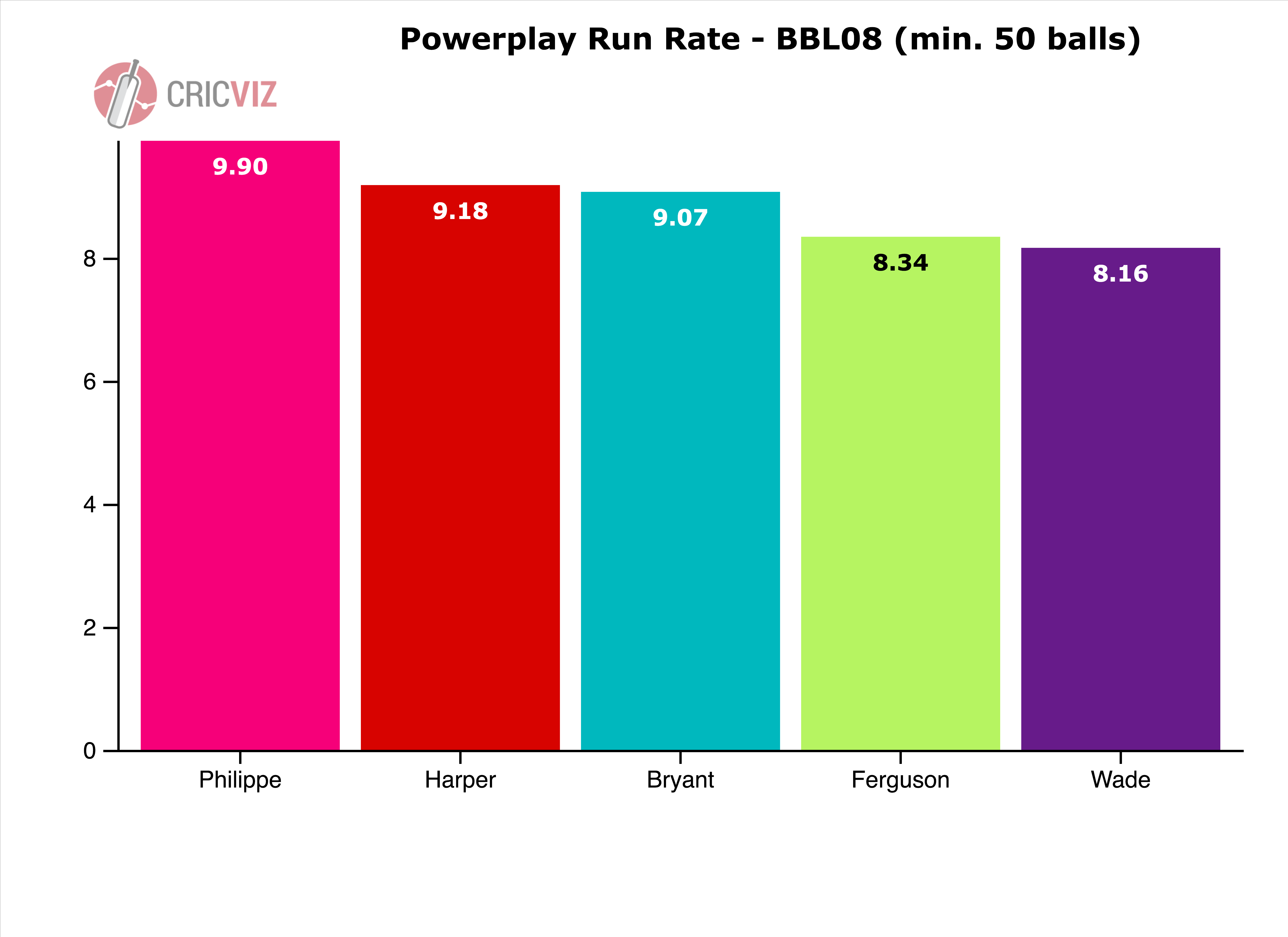 In the middle order, the Renegades made up for some scratchy starts thanks to contributions from Cooper and Christian, who each scored at more than 10 runs per over during the last five overs and Boyce, who wasn’t far behind with a run rate of 9.94.

Having that firepower down the order meant that, even when early wickets fell, the Renegades knew that, more often than not, they would be able to either post competitive scores to give their bowlers something to bowl at, or get themselves over the line when chasing.

Much like the batting, the Renegades fielding performance was defined not by spectacular individual contributions, but by consistently solid team performances. There were no extraordinary catches or improbable run outs, but the Renegades did the basics well and they did them often.

Using CricViz’s fielding ability metric, where each fielding action is rated according to its difficulty and a value is assigned in runs to measure the effect that that the action has had on the scorecard. According to this metric, the Renegades’ fielding was worth 2.72 runs per game – more than twice as high as the Sixers (1.20), the next highest team on the list. 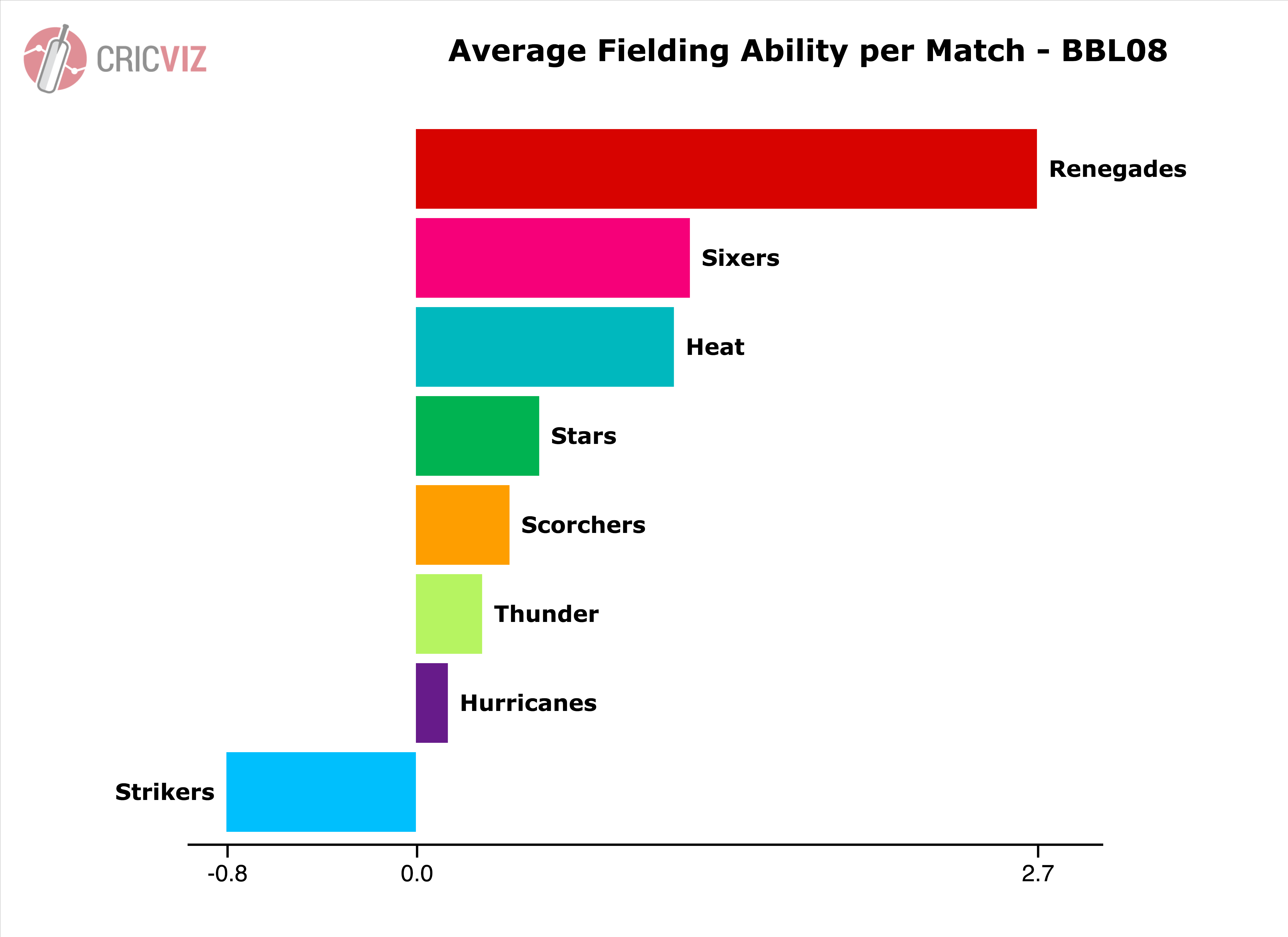 All of the above factors contributed to the Renegades pulling off a memorable tournament win. They were a tight-knit team that kept things simple and struck the right balance between having a game plan and being flexible enough to adapt to the changing situations that are inevitable in T20 cricket.

They combined a versatile, varied attack with a batting line-up packed with experience and lower-order power, had younger players hungry to make an impact, and fielded well throughout the competition.

Both of the knockout matches epitomised the kind of team they were, with victory snatched from improbable, but not impossible, positions. They did enough to stay in the game and had the experience, nerve and skill to get themselves over the line.

Patrick Noone is an analyst at CricViz